The map below shows the location of the plant, near Amersfoort, Gert Sibande District, Mpumalanga. 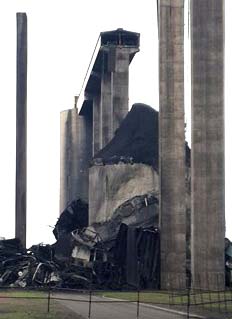 At 12:30 pm on Saturday November 1, 2014 Eskom maintenance workers noticed cracks appearing in a central coal storage silo and coal leaking out. Workers were evacuated from the site and at 1:12 pm the silo collapsed.[2] [3] (A video of the cracks in the silo opening up and spilling coal just before the collapse can be viewed here).

In its initial media release Eskom misleadingly stated that the silo had "cracked this afternoon" and had caused "damage to the central coal storage silo." It also stated that the damage had resulted in the "the loss of 1 800 MW" of capacity. As a result of the sudden drop in system capacity, Eskom announced that the following day it would commence "rotational load shedding."[4]

At full capacity the plants six units burn 56,000 tonnes of coal per day, supplied via a central conveyor system from the coal stockyard. The central conveyor then splits with three smaller capacity coal conveyers each supplying coal to a pair of the generating units. As the coal silo which collapsed was the central one and took with it sections of all three arms of the conveyor system, the impact on the plant was immediate. According to Eskom immediately after the silo collapse the power output of the plant was cut from 3600 MW to 1200 MW and then later 600 MW.[2]

To keep the plant running, Eskom moved to install mobile coal feeders to enable coal from a fleet of trucks to be used to supply five of the six generating units at a reduced level. In a media briefing Eskom stated that it aimed to operate the power station at half its installed capacity. In an initial briefing Eskom stated that the "cause and cost" of the silo collapse have yet to be determined.[2] (Reuters reported that a fleet of thirty trucks would be required to supply sufficient coal to keep four units going; the other two units would not be able to operate until the rubble from the collapsed silo could be removed, with Eskom estimated could take two weeks.)[3]

At the media briefing the day after the collapse Eskom stated that "the latest civil visual inspection [of the silo] was conducted in September 2013 by an external specialist, in line with best practice" and that "the concrete structure was found to be in good condition" and that "some moderate cases of external physical damage that was reported has since been repaired."[2]

In its media presentation Eskom stated that the sudden cutback in output from the plant imposed additional constraints on the system as during summer the utility has maintenance scheduled and "can't be deferred."[2] Eskom stated:

"Unlike winter, where the demand increases significantly during the evening peak (5pm-9pm), the demand profile during summer is much flatter with an increased demand profile throughout the day. This is because of a relatively high percentage of almost constant industrial load and the impact of air conditioning in the commercial and marginally in the residential sector during the day. The significant residential component over evening peak is not as evident in summer. If there is a constraint, the system is constrained all day."

To make up the shortfall in the short-term, Eskom increased generation from its hydro scheme, but noted on Sunday that by Wednesday it would start to run out of water reserves. As a result it argued that restrictions on load would be necessary to conserve water. It also noted that solar and wind were of limited use in meeting evening peak loads.

Eskom noted that as a result of the accident "it is very likely that load shedding will continue for the week."[2]

By the Monday Eskom were a little more optimistic, stating that no load shedding would be required on Monday or Tuesday as staff had been able to connect mobile feeder units and increase the capacity of the Majuba Power station to 1200 MW instead of just 600 MW. However, they forecast that "the system will be under extreme pressure on Wednesday and Thursday as the water reserves that we built up over the weekend for our peaking plants will be depleted."[5]

The trade union Solidarity claimed that Eskom had been aware of the structural problems with the silo since January but had failed to adequately address the problems with it.[6]

The union's head of industry, Deon Reyneke estimated that it could take up to three months to repair the silo or construct a permanent workaround.[7] He also stated that Eskom workers had been monitoring resonances at the silo since January and that, as a result of increased vibration, the silo was showing signs of deterioration. Reyneke said that in June and again three weeks prior to the collapse that the vibrations had worsened. "The vibration caused or worsened weaknesses in the silo and as the vibration increased, it eventually led to the collapse,” Reyneke said.[8]

One mining engineer, Kevin Gallagher, said that in his 40 years in the mining industry he had never heard of a silo collapsing. "I just think it's a lack of maintenance and no one doing proper housekeeping and inspection on equipment," he said.[6]

In an editorial, Business Day wrote that:

"Added to the problem are the financial constraints at Eskom, which means overtime pay is in short supply, so maintenance work takes longer than it should and units are offline for longer than SA can afford. It has meant too that the tariffs originally granted by the National Energy Regulator of SA did not adequately cover the costs of energy reserves such as running the gas turbines or paying large customers to shut down.

Increasingly, SA is stuck in a vicious cycle of electricity system constraints which is doing huge damage to the economy and to investment. It is not just that large industrial users are constantly having to shut down but that confidence in Eskom’s ability to provide the power reliably is so weak that it is deterring investment."

"The national grid was already buckling last week, with Eskom warning that its generation capacity had been reduced by about a quarter, mostly as a result of unplanned outages. Because many of our power stations are long in the tooth but are being forced to run at full capacity to meet demand, power cuts to allow for maintenance, and unplanned outages, are likely to be increasingly common.

With the deadline for the coming on line of the 4800MW Medupi power station becoming something of a moving target - it now seems that the first of its six generators will be plugged into the national grid by April next year, followed by the others at nine-month intervals - load-shedding is likely to be part of our national life until at least 2019.

The tragedy is that, with such power constraints, our economic-growth target of 5% a year - essential for the creation of significant numbers of jobs and reduction of inequality - is unlikely to be achieved."

The opposition Democratic Alliance criticised Eskom for arresting a Netwerk24 journalist, Le Roux Schoeman, who was photographing the collapsed silo. Schoeman was arrested under the apartheid era law, the National Key Point Act, on the grounds that the power station was a "national key point."[10]

“Iolnews’’ reported that "a man called Bheki asked Schoeman to get into an Eskom car and took him to an office on the premises. He made a photocopy of Schoeman's press card and wanted to see what was on his camera, claiming the power station was a national key point. He wanted to call an IT expert to make sure photos and videos had been deleted from the camera. Schoeman asked for legal advice and refused to hand anything to Bheki."[11]

In August 2020, the Daily Maverick published an Op-Ed on the devastating impact Eskom’s Majuba Rail project has had on Eskom, the built environment, and ultimately the economy.[12]

Fourteen million tonnes of coal per annum (14 Mtpa) are required to fuel the Majuba power station. Initially, coal for the plant was supposed to come from a new tied-colliery built and operated by the Rand Mines company. However, the Majuba Colliery had to be decommissioned and a branch rail link was built from Palmford on the Natal Corridor (Natcor) general freight line to Majuba power station to transport coal. Then, following policy changes in 2003 and 2004, Eskom contracted with new coal sources to supply coal to Majuba, even though the new locations made it impossible to move coal via the existing Palmford line. In other words, coal deliveries by rail started to be supplemented and displaced by delivery of coal by road. Around the year 2000, the need was identified to build a 68 km rail line from Ermelo to Majuba to transport coal.[12]

The original business case for the 68 km Majuba rail project was authorized in December 2004 with an initial board-approved cost-to-completion of R1.5 billion. The current estimated cost has since ballooned to R5.9 billion, plus R2.1 billion in capitalized interest during construction. The project was expected to be completed by the end of March 2021.[12]

Retrieved from "https://www.gem.wiki/w/index.php?title=Majuba_Power_Station&oldid=249347"
Categories:
This page was last edited on 9 June 2021, at 18:49.
Content is available under Creative Commons Attribution-NonCommercial-ShareAlike unless otherwise noted.
Privacy policy
About Global Energy Monitor
Disclaimers