In 2019, it was reported Duke Energy Carolinas could retire two units six years ahead of schedule, according to the depreciation study the utility completed for a rate-hike request. The company was listing the expected retirement of all five units at 2034.[1]

In Duke Energy 2020 Integrated Resource Plan's base case scenario, Duke used a 2035 retirement year for the plant (this was not a commitment to retire the coal plant and simply dates for planning purposes).[2] Under the plan, Duke would reportedly retire all of its power plants in the Carolinas that "rely exclusively on coal" within the next 10 years and add between 1,050 MW and 7,400 MW of storage to its portfolio under six scenarios outlined.[3]

In 2010, Abt Associates issued a study commissioned by the Clean Air Task Force, a nonprofit research and advocacy organization, quantifying the deaths and other health effects attributable to fine particle pollution from coal-fired power plants.[5] Fine particle pollution consists of a complex mixture of soot, heavy metals, sulfur dioxide, and nitrogen oxides. Among these particles, the most dangerous are those less than 2.5 microns in diameter, which are so tiny that they can evade the lung's natural defenses, enter the bloodstream, and be transported to vital organs. Impacts are especially severe among the elderly, children, and those with respiratory disease. The study found that over 13,000 deaths and tens of thousands of cases of chronic bronchitis, acute bronchitis, asthma, congestive heart failure, acute myocardial infarction, dysrhythmia, ischemic heart disease, chronic lung disease, and pneumonia each year are attributable to fine particle pollution from U.S. coal plant emissions. These deaths and illnesses are major examples of coal's external costs, i.e. uncompensated harms inflicted upon the public at large. Low-income and minority populations are disproportionately impacted as well, due to the tendency of companies to avoid locating power plants upwind of affluent communities. To monetize the health impact of fine particle pollution from each coal plant, Abt assigned a value of $7,300,000 to each 2010 mortality, based on a range of government and private studies. Valuations of illnesses ranged from $52 for an asthma episode to $440,000 for a case of chronic bronchitis.[6]

On Jan. 18, 2011, renewal permits for Duke Energy's Marshall Steam Station, Riverbend Steam Station, and G.G. Allen Steam Plant were approved by the North Carolina Department of Environment and Natural Resources division of water quality. Riverbend and Allen steam stations in Gaston County.The National Pollution Discharge Elimination System permits were renewed with some changes for the coal-fired power facilities that allow the discharge of treated wastewater to the Catawba River Basin, according to information from the state Department of Environment and Natural Resources.[7]

According to the department, the changes include:[7]

The permits also require Duke to install groundwater monitoring wells and to comply with groundwater standards, according to information from the state. While the permits require monitoring, the state didn’t go far enough, according to Catawba Riverkeeper David Merryman: “It’s disturbing to me that the state is allowing the unlimited release of mercury, selenium and arsenic into our waters." Merryman said he plans to look into the option of appealing the state’s decision on the permits.[7] 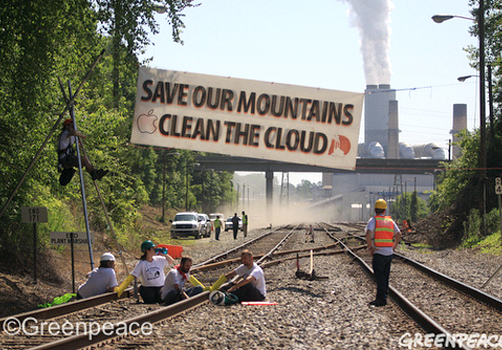 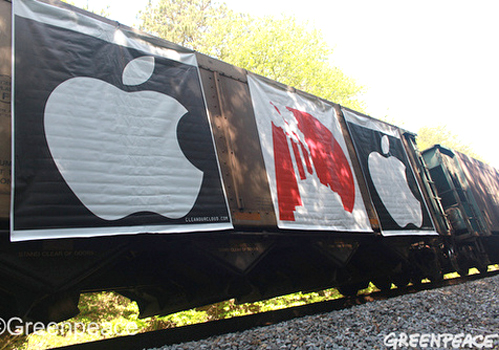 On May 3, activists protested mountaintop removal mining by locking themselves to train tracks, preventing coal train loads from entering Duke Energy's Marshall Steam Station in North Carolina. The activists, affiliated with RAMPS, Katuah Earth First!, Greenpeace and Mountain Keepers said they would not leave until Duke agreed to end its use of mountaintop removal coal operations. The power burned in Marshall is used to power Apple's iCloud data center.[8]

Marshall Steam Station's Active Ash Pond is on the EPA's official June 2009 list of Coal Combustion Residue (CCR) Surface Impoundments with High Hazard Potential Ratings. The rating applies to sites at which a dam failure would most likely cause loss of human life, but does not assess of the likelihood of such an event.[9]

Retrieved from "https://www.gem.wiki/w/index.php?title=Marshall_Steam_Station&oldid=284096"
Categories:
This page was last edited on 2 February 2022, at 17:06.
Content is available under Creative Commons Attribution-NonCommercial-ShareAlike unless otherwise noted.
Privacy policy
About Global Energy Monitor
Disclaimers