The Matarbari power station is a proposed 1200 megawatt (MW) coal-fired in Matarbari, Cox's Bazar, Chittagong, Bangladesh. It is one part of the broader Maheshkhali power complex plan that includes several proposed coal and gas-fired plants.

Plans have also been floated for another 1200-1320 MW coal plant in Matarbari, phase III. These plans have been discussed by Coal Power Generation Company Bangladesh Limited,[1] and the project is also listed in the Bangladesh Master Plan, with a proposed commissioning of 2026.[2] However, there have been no developments on the project.

The map below shows the location of the proposed Matarbari power station.[3][4][5]

It was reported in March 2014 that "Coal Power Generation Company Bangladesh (CPGCB) will get $4.53 billion loan according to the agreement with Japanese donor agency Japan International Cooperation Agency (JICA) for the construction of a 1200MW coal-fired plant at Matarbari on Maheshkhali Island in Cox's Bazar."[4][6]

In February 2014, the Daily Star described the approximately $4 billion price-tag of the Matarbari project as "staggering." The paper reported that a feasibility study had been conducted for the project by Japan International Cooperation Agency (JICA) and Tokyo Electric Power (TEPC). According to the study, the cost was far higher than the 1320 MW Rampal power station, which would cost at least $1.5 billion. The reason for the high price of the Matarbari project is the additional components: river dredging, transmission, land acquisition (Tk350 crore), and a port on Sonadia Island capable of receiving and unloading large ships. Power would cost nearly Tk 7 per kilowatt hour when the plant goes into operation in 2023.[7]

According the Daily Star's report on the Jica/TEPCO feasibility study, the project would begin construction in 2017. The site has six threatened species, including one bird and five reptiles. The plant would use ultra-supercritical technology. Its cooling water would be discharged into the sea "at an ambient temperature." It would have "elaborate air and water pollution control arrangements." The study promised that the plant would provide "full electrification of the local community."[7]

The Daily Star reported the implementation process as follows:[7]

As per the project's implementation schedule, the government needs to sign a loan agreement by late March and then appoint a consultant. But due to the volatile political situation since late last year, progress to this end has been stalled. Officials at this point are not sure about when the loan agreement could be signed and with whom.

The schedule also says that the basic design, bid documents preparation and floating of the tender for prequalifying power companies for this project would be done within next year and the contract would be awarded in 2016 so that a 52-month construction can begin in 2017.

However, in August 2014 the Planning Minister Mustafa Kamal announced that the Executive Committee of the National Economic Council (Ecnec) had approved the project and that the Japan International Cooperation Agency (JICA) funding for the project was US$3.8 billion as a "soft loan." The Minister stated that he hoped that the first 600MW unit of the plant would be commissioned in 2018.[8]

In January 2015 the project was approved as part of the government's priority-based "Fast-Track Projects".[9]

According to a February 2016 report, construction will begin in late 2016, with Sumitomo Corporation and Marubeni Corporation shortlisted to build the plant. The amount of the loan is US$3.7 billion, with an interest rate of 0.1 percent over 30 years after an initial 10-year grace period. The thermal efficiency of the plant is estimated at 41.3 percent.[10]

In November 2016 it was reported bidding between Marubeni Corporation and Sumitomo Corporation on constructing the plant would be extended to 2017.[11]

In January 2017 Marubeni and a consortium of Toshiba-Sumitomo submitted technical and financial bids for the US$4.5 billion coal project.[12] In May 2017 it was reported that the bids had been evaluated and the contract was expected to be awarded by June 2017 and physical works by July 2017.[13][14]

In June 2017 it was reported that Marubeni had been rejected as its financial offer was allegedly not satisfactory. The technical evaluation committee (TEC) of the project has recommended Sumitomo Corporation as the eligible bidder. A pre-contract negotiation with Sumitomo is supposed to be finalised within two months.[15]

In July 2017 it was reported construction by Sumitomo Corporation would begin in August 2017, with operation planned for 2024. Sumitomo will also build the Matarbari Port.[16]

To develop the project, the ground needs to be raised 10 meters above mean sea level. In April 2019, it was reported that land development and channel excavation was 70% completed.[21]

Planet satellite photos from February 2018 to September 2019 show significant dredging and land clearing, and from October 2019 to May 2020 show preliminary construction work has begun.

In April 2021, project sponsor Coal Power Generation Company Bangladesh Limited (CPGCBL) announced a phase I cost overrun of roughly US$2 billion, and asked for a time extension by 3.5 years "up to December 2026 from the existing deadline of June 2023 for execution of the project".[22]

Since 2014 the project has been uniquely financed by the Japan International Cooperation Agency (JICA) with five separate overseas development assistance loans. Due to the project's use of ultra-super critical technology, part of JICA's original justification for its involvement was that "this project will mitigate climate change in addition to alleviating the power shortage and improving the stable power supply in Bangladesh."[24] JICA's five low interest loans total approximately US$2.79 billion. Its latest US$1.33 billion loan reached financial close in July 2020.[25]

Nippon Export and Investment Insurance is providing export credit insurance coverage for the project and in 2017 it estimated the total project costs to be JPY 500 billion (approximately US$4.5 billion). Sumitomo Mitsui Banking Corporation is the project's Financial advisor.[26]

In March 2021, it was reported that JICA was conducting an environmental and social impact assessment for the proposed Phase II expansion of Matarbari which would be the basis for a JICA decision on providing further financing. According to Naoki Ito, Japan's ambassador to Bangladesh, "In spite of difficulties, my government decided to do a survey and research on unit 3 and 4."[27]

According to local news reports, the construction of Matarbari Phase 1 blocked watergates and natural drainage systems designed to drain flooding caused by monsoons and cyclone-induced storms, “resulting in water logging after heavy rainfall, causing immense suffering for locals”.[26] In 2018, 22 out of 31 villages were waterlogged and inundated, and local communities reported “five incidents of death by drowning, of which all were children.”[28] Seven school children were also severely injured by a boat sinking incident during their commute from school.[26] 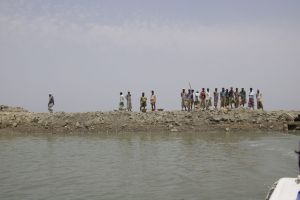 Villagers who were evicted due to the construction of the Matarbari Kohelia coal plant. Photo Credit: Sharif Jamil, Waterkeepers Bangladesh

The land acquisition process for Matarbari Phase 1, which commenced in 2013, has resulted in the loss of people’s homes and livelihoods.[29] The process has caused upset because the community was not properly consulted and, to date, not adequately compensated. Displaced families have not been relocated to new housing facilities promised by the project proponents, forcing some to migrate and resettle elsewhere.[30] The communities have also lost traditional livelihoods in salt cultivation and shrimp farming, leaving 20,000 people without the means to make a living.[31]

Potential air pollution impacts are also expected to be severe and, given the extensive Japanese interest in the project, would not be acceptable in Japan. According to a research report by Greenpeace Southeast Asia and Greenpeace Japan, Matarbari Phase 1 would not meet the pollution standards applied to new plants constructed in Japan. The report finds pollution from Matarbari Phase 1 alone would cause up to 14,000 premature deaths during its operational years.[32]

The 3,000 labourers at the Matarbari construction site have been forced to work during the COVID-19 pandemic despite strict government orders to stop. In April 2020, the workers went on strike demanding their right to safe health. When probed by reporters, a CPGCBL spokesperson denied any grievances by workers and stated that work will continue.[26]

On July 13, 2020, it was reported that two workers died during construction of the Matarbari plant when an electric pillar fell. The pillar fell on one worker, killing him instantly. Another worker was on the pillar when it fell and died later in the hospital.[33]

Phase II is listed in the Bangladesh Master Plan (updated in November 2018), with a proposed commissioning of 2028.[35]

To establish phase II, the government has asked loan assistance from the Japan International Co-operation Agency (JICA). Phase II will be two additional units. It is planned that Sumitomo Corporation, Toshiba and IHI Corporation of Japan will build the plant. Reportedly 1608 acres of land have been acquired.[34]

On June 19, 2020, Japan’s Ministry of Foreign Affairs (MoFA) confirmed that it had decided to proceed with a preparatory survey by the Japan International Cooperation Agency (JICA) for the proposed Phase 2. JICA appointed Tokyo Electric Power Services Co Ltd (TEPSCO) to conduct the survey. The EIA is expected to be completed by October 2021. In a joint statement, 350.org and other NGOs called for the Japanese government to stop the survey, saying new solar was already cheaper than new coal power in Bangladesh; that the project was not in line with Japan's climate commitments; and that phase I of Matarbari was already resulting in severe disruptions to people's livelihoods.[36]

On November 19, 2020, The Daily Star reported that Bangladesh's power, energy and mineral resources ministry had finalized an energy plan that cancelled all coal plants except five under construction. Only phase I of Matarbari is listed; Phase II will likely be cancelled as a result. The ministry will soon send the plan to the Prime Minister's Office for review.[38]

In May 2021, Sumitomo Corporation announced its new "Revision to Policies on Climate Change Issues". Although Sumitomo said it will not be involved in any new coal power generation projects, it explicitly left Matarbari phase 2 (units 3 and 4) as an exception.[39]

Matarbari power station is part of a large multi-plant complex being organized by the Bangladesh Power Development Board (BPDB). In August 2013 the BPDB announced that it intended to develop a multi-plant power complex at Cox's Bazaar, including both coal-fired plants and combined cycle gas-fired plants. The announcement stated that the BPDB "intends to build 6000 MW Ultra Super Critical Coal Based Thermal Power Plant and 3000 MW LNG Based Combined Cycle Power Plant in different phases at Maheshkhali Upazila in Cox’s Bazar District." The announcement stated that the fuel for the projects would be imported coal and liquified natural gas. Five thousand acres were in the process of aqcquisition, situated within Amabassaya, Honanok and Panir Chhara mouza of Hoanok Union and Gharibhanga mouza of Kutubjhom union under Maheshkhali upazila, Cox’s Bazar. Ultra-supercritical technology would be employed by the coal plants, which would be sized at 600 to 1000 MW per unit.[40]

Retrieved from "https://www.gem.wiki/w/index.php?title=Matarbari_power_station&oldid=246400"
Categories:
This page was last edited on 25 May 2021, at 17:20.
Content is available under Creative Commons Attribution-NonCommercial-ShareAlike unless otherwise noted.
Privacy policy
About Global Energy Monitor
Disclaimers