Wind energy has gained a tremendous amount of attention around the world, with most reporting focused on the American Great Plains, such endeavors as the T. Boone Pickens installations in the Texas Panhandle.[1] In addition, there has been negative publicity about resistance to plans for offshore wind in the Cape Cod area. Michigan has been behind the curve in developing a wind industry, but could become a strong player in this area in coming years. With the opening in 2008 of the first large scale new wind installations in the state,[2] and a new minimum requirement for renewable energy development, Michigan may be poised for a revolution

Consumer's Energy has constructed a meteorological tower in rural Elmwood Township, in Tuscola County, [3] to lay the groundwork for planned wind development in the area.

Now a Florida based company has announced it is ready to build a new wind park in Bay and Tuscola counties, which will include up to 66 turbines.[4] The company says the project would represent a $250 million investment in the area. A long term assessment of economic benefits, according to NextEra, the project's developer, include: • $15 million in property tax payments; • $20 million in payments to 75 landowners; • $25 million in salaries and benefits to 10 employees who will operate the park; • $30 million in the purchase of local goods and services by the company.

About 100 residents attended a meeting in Bay County's Merit Township on the project. “We haven’t heard anybody saying ‘Get off of our property’ or ‘No way!", said Scott Hawken, a spokesman for NextEra.

The Michigan Department of Environmental Quality recently gave a boost to all forms of alternative energy by asking that applicants interested in building coal generation facilities consider all possible alternative first.[5]

A recent study by the Land Policy Institute at Michigan State University has shed new light on the potential for offshore wind development in Michigan's Great Lakes. The report indicates that 321,000 megawatts of energy might be available off Michigan's shores. A thousand megawatts would be comparable to a very large coal or nuclear plant, so the figure represents the equivalent of hundreds of large traditional power plants.[6] That number represents an unlikely upper end (advocates say up to a third of the nation's electricity),[7] but the report makes the point that the Lakes represent a wind resource of the first order[8].

Michigan's central position in the Great Lakes region, strong manufacturing infrastructure, skilled labor resource, rail and water transportation hubs, and high technology expertise could make the state highly competitive in an industry that may rival the auto industry in size in coming years. Michigan is starting late, however, and it appears that Ohio will be the first state to install offshore wind turbines in the Cleveland area. 2 to 10 wind turbines could begin construction within the next few years. Wisconsin is also currently processing public comments with regard to three offshore wind proposals.[8]

In February, 2009, the Traverse City Record-Eagle reported that Michigan officials are looking to the day when offshore wind towers become a reality. "There's been tremendous interest for some time now, in wind energy and solar. At any time, somebody could walk through the door and say they want to do this," according to John Sarver, a supervisor with the Michigan Department of Energy, Labor and Economic Growth, who was quoted in the article.[9]

Interconnected Grid one answer to Intermittence

An interconnected Great Lakes wind grid would potentially address one of the major objections made to wind energy, that the power is intermittent. Wind offshore on the lakes is already steadier than land based wind. Interconnecting a series of wind projects from one end of the lakes to the other would all but insure that a predictable level of power would be generated by the system - as a predictable average of wind would be blowing somewhere on the lake system at any given time or season. The idea has been broached in Europe for an interconnected North Sea Wind grid that might supply 70 million people. GreenPeace energy experts point out that, "A dip in wind-power generation in one area could be 'balanced' by higher production in another area, even hundreds of kilometres away, providing clean power for millions of European homes."[17] 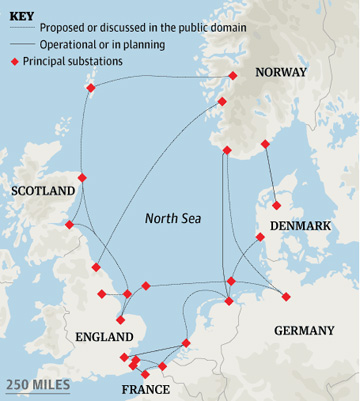 In addition to an interconnected grid, several energy storage techniques exist to address intermittance from renewable sources. One is pumped storage. The Ludington Pumped storage facility, which, with an 1800 MW capacity, gives the state an already operating capability to store energy from wind development.[18]

By the end of 2008, a bevy of new wind projects were taking place in Michigan's thumb and elsewhere.[19]

The first large scale proposal to construct offshore wind turbines in Michigan waters of Lake Michigan may run into some resistance from local residents, concerned about visual pollution and environmental safety.[26]

Scandia Wind LLC, a new company, is proposing a 4 billion dollar project that will include hundreds of turbines located offshore near Michigan's Oceana, and Mason Counties. In a recent public meeting, a number of residents expressed reservations and outright hostility to the project. Scandia would partner with Havgul Clean Energy in Oslo, Norway, to manufacture and construct the project. The developers hope to take advantage of the close proximity to Ludington's Pumped storage facility, to smooth out peaks and valleys in wind capacity.

While Michigan is a late starter in the renewable energy economy, it's proven to be a quick study. A recent report by the state's Economic Development Corp. ndicated there are now 700 Michigan manufacturers doing wind-related work.[27]

A state tax credit of $7.3 million over nine years helped draw Global Wind Systems Inc., a new wind turbine manufacturer to Michigan, winning out over bids from Nebraska, Ohio, and Iowa. The company will invest $32.3 million to locate its first facility in Novi. The project is expected to create 807 new Michigan jobs, including 356 directly by the company.[28]

The Bay City Times reports that with the advent of Michigan's Renewable Portfolio Standard, manufacturers are looking at Michigan as a place to set up shop, and local companies that have lost business from the dwindling auto industry [29]are now finding new customers in the wind arena. According to the Times report, "Merrill Tool & Machine in Saginaw County got into the wind component business a couple of years ago. An official there said Bay County has the right idea.

Sova said his company doesn't even make automotive parts anymore. But the wind side of his business, making gearbox components like housings, rotors and shafts for commercial turbines, is growing."

Retrieved from "https://www.gem.wiki/w/index.php?title=Michigan_wind_energy&oldid=234674"
Categories:
This page was last edited on 30 April 2021, at 11:02.
Content is available under Creative Commons Attribution-NonCommercial-ShareAlike unless otherwise noted.
Privacy policy
About Global Energy Monitor
Disclaimers