Phase III of the pipeline would go under the Potomac River between Berkeley Springs, West Virginia and the border between Maryland and Pennsylvania.

Originally, all three phases were expected to begin operations in 2019, but there have been no indications of construction activity since the project was first proposed.

The proposed Eastern Panhandle Expansion would be built by Columbia Gas Transmission, a TransCanada subsidiary. The pipeline would connect a TransCanada pipeline in Pennsylvania to a Mountaineer Gas line in West Virginia by going under the Potomac River near Hancock, MD.[5] The pipeline would require a permit from the state of Maryland because it owns the Potomac, and it would require a permit from the National Park Service because it would run beneath the Chesapeake and Ohio Canal National Historic Park.[5]

In January 2019 the Maryland Board of Public Works declined to give an easement for the pipeline to go through Maryland, including a "no" vote from Gov. Larry Hogan, who has been previously supportive of expanding infrastructure for natural gas.[6]

According to the U.S. Energy Information Administration, as of April 2021 the project is on-hold.[4]

At a February 2017 TransCanada presentation about the pipeline in Hancock, MD, pipeline opponents cited the potential for the project to contaminate the drinking water that the Potomac River provides to more than 6 million people.

In April 2017, in response to its Notice of Intention to prepare an Environmental Assessment (EA) of the project, FERC received comments from the Potomac Riverkeeper Network, Waterkeepers Chesapeake, Allegheny Defense Project, and the Chesapeake Climate Action Network, citing the potential for the pipeline to harm groundwater quality, karst features, and the Chesapeake and Ohio Canal National Historical Park. FERC has announced that its EA will be published in January 2018.[7]

In June 2017 activists began a camp-in protest at the proposed site of the pipeline, and urged Maryland Gov. Larry Hogan to deny TransCanada a certification stating that the project would not impact state water quality. Maryland has banned fracking, and activists argue that it should not be complicit in sending fracked gas to other states.[8] 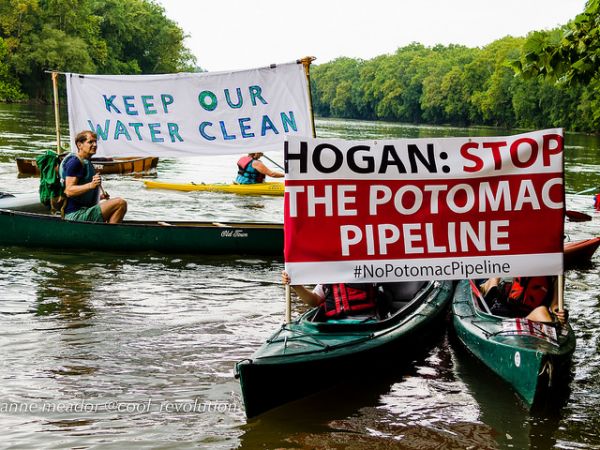 In December 2017 more than 200 residents and activists attended a rally outside a Maryland Department of the Environment hearing on the pipeline that was held in Hancock, MD.[9] The pipeline has also been opposed by several local governments, including the Boonsboro, MD Town Council, the District of Columbia City Council, and the Washington County, MD, Board of Commissioners.[10]

In January of 2019, a board of high-ranking Maryland officials rejected the proposed pipeline's section that would run across the western part of the state carrying natural gas produced in Pennsylvania to West Virginia. The Board of Public Works voted 3-0 against an easement for TransCanada’s pipeline. It would run under the Potomac River near Hancock, Maryland, and extend about 3 miles from Columbia Gas’ network in Pennsylvania to Mountaineer Gas’ distribution system in West Virginia.[11] In May of 2019, TransCanada filed a federal lawsuit against the state to gain access to state property to drill a pipeline under the Western Maryland Rail Trail. The state’s attorney general has moved to dismiss the suit, saying the Constitution does not allow a federal court to order a state to grant an easement in cases like this. In June of 2019, 62 Maryland lawmakers signed an open letter opposing an effort by Columbia Gas Transmission to build a three-and-a-half mile long fracked-gas pipeline under public lands in the western part of the state.[12]

In August of 2019, a federal judge in Maryland threw out a lawsuit that would have overruled Maryland state officials who had previously banned the project. The company had sought access to Maryland property through eminent domain, but the board of state officials rejected the proposed pipeline across 3 miles (4 kilometers) of western Maryland, and the company then took the matter to federal court.[13]

Phase III would also cut through Jefferson County, West Virginia to supply a new industrial park near Charles Town. At the moment, the only customer is the Rockwool mineral wool factory, which has just begun construction under much controversy. Opponents of Rockwool say local and state governments subverted the county’s comprehensive plan, manipulated zoning codes and negotiated generous tax breaks and subsidies in secrecy. They object to the polluting emissions the plant would produce close to four schools and the potential for water contamination and catastrophic accidents.[2]

The pipeline runs as close as 35 feet to some homes, and 80 homes are within the 150-foot blast radius. Mountaineer Gas took two families to court to get eminent domain. One of those sued, the Keseckers, own a 100-acre farm in Berkeley County. The pipeline cuts right through the middle. They can’t plant on it, must continue to pay property taxes on the land and are liable for damages to the pipeline. Pipeline opponents say laying pipe is more dangerous in the Eastern Panhandle because of its special geology called karst, a unique geological formation that acts as a rocky sponge. Pipeline companies have up until now purposely avoided building in karst. Leaking and explosions are more likely to happen in karst geology because of the instability of the terrain. Water contamination is also a distinct possibility when building a pipeline in karst.[2]

Retrieved from "https://www.gem.wiki/w/index.php?title=Mountaineer_Gas_Pipeline&oldid=253081"
Categories:
This page was last edited on 28 June 2021, at 18:05.
Content is available under Creative Commons Attribution-NonCommercial-ShareAlike unless otherwise noted.
Privacy policy
About Global Energy Monitor
Disclaimers