Although NAM has a long and unabashed history of representing the interests of industrial corporations, progressive blogger David Sirota has accused them of being a "front group," a "corrupt, partisan wing of the Republican apparatus whose leadership often uses NAM's resources against the interests of the majority of NAM's own members.[1]

Ties to the Koch Brothers 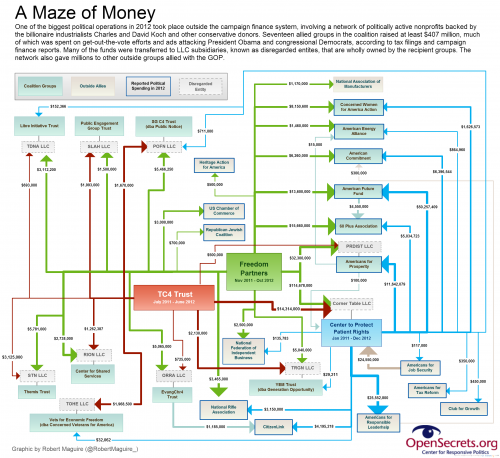 The Koch network was one of the biggest political operations in 2012 and worked largely outside the campaign finance system, raising at least $407 million. Source: Robert Maguire with the Center for Responsive Politics.

The EPA released a new draft rule on coal emissions in June 2014, which would require power plants to reduce their carbon dioxide emissions to 30% below their 2005 level by 2030.[2] In a statement opposing the rule, NAM claimed that

"manufacturers rely on secure and affordable energy to compete in a tough global economy, and recent gains are largely due to the abundance of energy we now enjoy. Today’s proposal from the EPA could singlehandedly eliminate this competitive advantage by removing reliable and abundant sources of energy from our nation’s energy mix."[3]

In late June, the Supreme Court released a decision largely upholding the EPA's authority over regulating carbon emissions, but which accused the EPA "of seeking an “enormous and transformative expansion” of its authority without approval from Congress," according to Politico. A statement from NAM called the decision a "victory for the integrity of our regulatory process and rational limits on executive power."[4]

In April 2009, NAM protested the Environmental Protection Agency's finding that greenhouse gas (GHG) emissions endangered public health and could be regulated under the Clean Air Act. "Using outdated programs under the law to regulate GHG emissions would burden an ailing economy while doing little or nothing to improve the environment, NAM Pres. John Engler said. 'The clean air laws were designed to focus on local pollutants. GHG emissions, however, are global in nature and require a new framework.'" [5]

In the 1990s, NAM coordinated a group called the "Air Quality Standards Coalition," an industry coalition "to fight EPA limits on soot and smog pollution" that was managed by C. Boyden Gray, who at that time also headed Citizens for a Sound Economy.[6]

In 2009, Duke Energy, which operates scores of coal-fired power plants in the Southeast and Midwest, announced that would not be renewing its membership due to NAM's refusal to address global warming. In an interview, Duke CEO Jim Rogers siad, "We are not renewing our membership in NAM because in tough times, we want to invest in associations that are pulling tin the same direction we are." Rogers said that NAM, as well as the US Chamber of Commerce and the Republican Party "ought to roll up their sleeves and get to work on a climate bill, but quite frankly, I don't see them changing."[7]

NAM's website states that it opposes proposals for government financing of political campaigns, and furthermore that it

"opposes legislative or regulatory efforts that unduly or unfairly infringe on the right of individuals freely to associate within the political process. It will oppose any efforts to discourage people from contributing to a PAC or candidates from accepting PAC donations to their campaigns."[8]

The Center for Responsive Politics wrote in April 2013 that NAM, along with Koch Industries and the US Chamber of Commerce, had been lobbying "to prevent the Securities and Exchange Commission or Congress from requiring them to disclose donations to politically active nonprofits."[9] According to the New York Times, earlier that month NAM had joined the US Chamber of Commerce and the Business Roundtable in issuing "a rare joint letter to the chief executives of Fortune 200 companies, encouraging them to stand against proxy resolutions and other proposals from shareholder activists demanding more disclosure of political spending."[10]

Opposition to Sanctions on Russia

In June 2014, the Obama administration planned to expand sanctions against Russia by "banning any interactions with some of Russia’s largest banks; cutting off technology transfers to Russian energy and defense firms; and shutting down business with Russian defense companies." These planned sanctions were in responses to apparent Russian involvement in supplying troops and equipment to separatists in eastern Ukraine.[11] NAM and the US Chamber of Commerce planned to oppose the proposed sanctions by running ads in "The Financial Times, The Hill, The New York Times, Politico, Roll Call, The Wall Street Journal and The Washington Post" that claimed sanctions "would harm American manufacturers and cost American jobs."[11]

Section 1502 of the Dodd-Frank Wall Street Reform and Consumer Protection Act, passed in 2010, required annual disclosure about "whether any conflict minerals that are necessary to the functionality or production of a product of the person, as defined in the provision, originated in the Democratic Republic of the Congo or an adjoining country."[12] This "conflict minerals rule" was challenged when NAM, along with the US Chamber of Commerce and the Business Roundtable, petitioned the U.S. Court of Appeals to review rules the SEC developed to implement Section 1502, arguing that the SEC had violated procedural requirements and that the rule requirements violated the First Amendment by compelling speech.[13] According to legal representation for Amnesty International, which intervened as a respondent in the case, a July 2013 decision by the district court rejected these arguments, but the court of appeals

"invalidated the requirement that companies use specific language when reporting that their products have “not been found to be DRC-conflict free.” Applying Central Hudson Gas & Electric v. Public Service Commission, 447 U.S. 557 (1980), the court of appeals held that requiring this specific descriptor violates regulated entities’ First Amendment right against compelled commercial speech."[14]

In the decision, Senior Circuit Judge A. Raymond Randolph wrote,

"The label “conflict free” is a metaphor that conveys moral responsibility for the Congo war. It requires an issuer to tell consumers that its products are ethically tainted, even if they only indirectly finance armed groups. An issuer, including an issuer who condemns the atrocities of the Congo war in the strongest terms, may disagree with that assessment of its moral responsibility. And it may convey that “message” through “silence.” See Hurley, 515 U.S. at 573. By compelling an issuer to confess blood on its hands, the statute interferes with that exercise of the freedom of speech under the First Amendment.[15]

After losing a legal challenge to language in the "Honest Leadership and Open Government Act of 2007 that requires groups to release the names of members that contribute $5,000 a quarter to the coalition’s lobbying efforts and actively participate in its lobbying activities," NAM listed 65 of its corporate members on its website. [16] The listing was difficult to find on the website and was posted as a graphics file, making the transfer of the information more difficult.

Retrieved from "https://www.gem.wiki/w/index.php?title=National_Association_of_Manufacturers&oldid=235090"
Categories:
This page was last edited on 30 April 2021, at 11:02.
Content is available under Creative Commons Attribution-NonCommercial-ShareAlike unless otherwise noted.
Privacy policy
About Global Energy Monitor
Disclaimers