New Mexico is the site of about six percent of U.S. total gas production, as of mid-2012, and is home to the world's largest coalbed methane field: the San Juan Basin. Another significant area of gas production is the Permian Basin.[1]

In 2012, the drillers drilled new wells in Chaco Canyon on the southern San Juan Basin, and the prominently Navajo communities of Lybrook and Counselor. Chaco Canyon, and surrounding lands, are rich with ancient Pueblo artifacts and tribal ruins[2]

In March 2015 Environmentalist groups sued the federal Bureau of Land Management (BLM) in March 2015, pushing the agency to stop allowing hydraulic fracturing near sensitive areas. The judge denied the plaintiffs' and leasing in the region has continued.[3]

Much of New Mexico operates under split estate laws, which means the landowner does not necessarily own the mineral rights to the land. This can create controversy between gas drilling companies and landowners.[4] 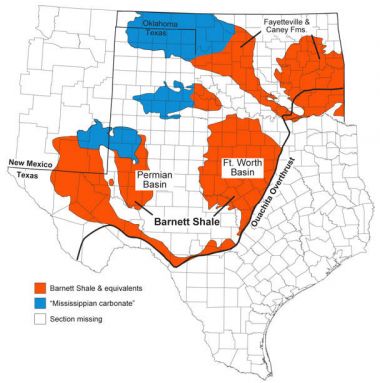 In 1921 the Aztec Oil Syndicate drilled the first producing well in the natural gas rich, San Juan Basin, laying the groundwork for the first boom in the state. Oil companies then entered into financially sucessful oil leases with a newly formed Navajo government. Hydraulic fracturing was done by exploding nitroglycerin into wells.[5]

El Paso Natural Gas built a pipeline in 1951 from the San Juan Basin to California.

An Associated Press investigation found that between 2009 and 2014 New Mexico spilled 13.3 million gallons of wastewater. The state ranked third-highest of the states for amount of wastewater spilled during that time period.[6]

On April 29, 2013, Mora County commissioners voted 2-1 to ban all oil and gas extraction in their county, near Santa Fe and home to 5,000 people. A temporary drilling moratorium is already in place in neighboring San Miguel County, but Mora County is credited as the first in the nation to impose an outright ban on all oil and gas drilling.[7] The ordinance also established that citizens have a right to a safe and clean environment.[8]

John Olivas, chairman of the Mora County Commission, said the ban in his county stemmed from fear that fracking might harm water wells.[9]

In January 2015 U.S. District Court for New Mexico struck down the ban on drilling in Mora County. District Judge James Browning found that the ban violated both the "U.S. Constitution's supremacy clause and state laws that allow drilling generally and fracking specifically." It was reported that the Community Environmental Legal Defense Center or Mora County could appeal the ruling to the 10th U.S. Circuit Court of Appeals. It was the first time a federal judge had made a ruling on a local fracking ban.[10]

The Battle for Otero Mesa

Otero Mesa is a 1.2 million acre desert grassland in southern New Mexico. Located below the Otero Mesa is the Salt Basin Aquifer, which is contains an estimated 57 million acre feet (unit of volume commonly in the US in reference to large-scale water resources[11]) of groundwater. According to experts, the fractured nature of its geology makes the aquifer vulnerable to the rapid spread of contamination. It is also federal land. Following a 1997 natural gas discovery, the BLM sought to lease the land for hydrofracturing for two dollars per acre. The BLM, under the Bush Administration, gave the rights to “a company whose White House connections were key to reversing earlier plans to protect much of the area from drilling”. The only bid came from Harvey E. Yates Company, or HEYCO, of Roswell, N.M. [12] Some are calling foul play. HEYCO contributed more than $200,000 in GOP donations. Yates also hosted a GOP fundraiser attended by VP Dick Cheney in 2002.[13]

New Mexico conservation and wilderness groups coalesced to form The Coalition for Otero Mesa in 2002. Many state officials and departments were involved with the coalition, including Gov. Bill Richardson.

State officials reviewed the proposed plans for drilling by BLM, and proposed an alternative plan that “would allow some drilling while placing about 75% of the mesa off-limits to energy exploration and creating a 640,000-acre national conservation area”. Richardson claims that "The BLM totally disregarded my proposal. There is no balance and no regard for ranchers or hunters." According to the LA Times, BLM’s final drilling plan issued in January of 2005 “[was] smaller in scope than originally contemplated but much larger than what Richardson indicated he would support. It allows drilling up to 141 exploratory wells across 95% of Otero Mesa.”[14] Read NM Gov. Bill Richardson's letter to the BLM here. On Earth Day 2005 the state of New Mexico sued the federal government. The law suit included arguments that BLM did not conduct a complete environmental review of the land and water resources. The law suit, which took place in 2007, was successful in creating a drilling moratorium until an environmental assessment could be completed on the aquifer underneath Otero Mesa. Several environmental groups appealed parts of the 2007 decision.

On April 27, 2009, the 10th Circuit Federal Court of Appeals ruled on an additional suit brought by the state of New Mexico, environmental and conservation groups, and state agencies. The Court ruled “the BLM violated the National Environmental Policy Act when it failed to adequately study the impacts of drilling on an aquifer underneath Otero Mesa and then declared the impact to be minimal”. It also ruled that the BLM has a duty to also consider other possible uses of the land, “including conservation to protect environmental values”.[15][16][17][18]

The Battle for Valle Vidal

In 2002, El Paso Corporation publically announced its desire to explore hydrofracturing in Valle Vidal, “the Valley of Life”, a 102,000 acre section of the Carson National Forest in northern New Mexico. The area first became popular with actors and actresses, wealthy businessmen, and oil company executives as a “sporting playground”. Elk were hunted to extinction in the park. However, Pennzoil Corporation donated the land to the government in 1982 and the elk have since been reintroduced.[19] Many refer to it as the “Yellowstone of New Mexico” in reference to its unique and pristine beauty. This is the location headwaters of both The Rio Grande and the Canadian River. Expert testimony stated that it “is an important… [in] protect[ing] the habitats of over fifty mammal species, more than two hundred bird species, and sixteen reptiles and amphibans”. It is also essential to water quality along the Rio Grande and Canadian River.[20]

The area also holds an estimated 150 billion cubic feet of natural gas worth about 900 million dollars. This is enough natural gas to meet US needs for about two days. Up to 500 wells with associated roads were estimated could have been built. The surrounding 1.5 million acres of Carson Forest had already been opened for gas drilling.[21]

In response, local parties organized The Coalition for the Valle Vidal, made up of over 400 governments, organizations, businesses, and individuals. They sought a drilling ban on the 102,000 acres of Carson National Forest in addition to legal protections to protect the area's future. Diversity among coalition members shocked many. Chris Wood, vice president for conservation at Trout Unlimited commented, "Something is happening here… what we're seeing is the emergence of a powerful new voice in conservation. It's not your garden-variety environmental groups. It's hunters and anglers and outfitters and guides that are helping convince Democrats and Republicans alike of the need to protect these last places." [19]

The coalition brought Gov. Bill Richardson to nominate the area for the highest level of protection under the Clean water Act as well as requesting it be designated a roadless area, which would ban construction of new roads. US Representative Tom Udall sponsored legislation to ban both oil and gas drilling in Valle Vidal. The US House unanimously approved the Valle Vidal Protection Act on July 24, 2006.[19][22] The Senate passed the Act November 17, 2006, and was signed by President Bush on December 12, 2006.[23] [24]

Is fracking to blame?

In November 2011, the New Mexico Oil and Gas Association announced that it will now require New Mexico oil and natural gas producers to disclose some of the fluids used in hydraulic fracturing operations. The Commission's rule requires companies to report only what they already report on Material Safety Data Sheets (MSDS). MSDS cover some chemicals specific to workers and are federally required by the Occupational Safety and Health Administration to protect workers. The restriction to MSDS data means that a large universe of chemicals frequently used in hydraulic fracturing treatments will go unreported, leading some to call New Mexico's fracking disclosure law the worst in the country.[25] Gwen Lachelt with Earthworks' Oil and Gas Accountability Project was disappointed with the commission's decision: "They went through all the motions to put in place a rule that requires nothing more than what's already required on material safety data sheets."[26]

New Mexico's pit rule, established in 2008, requires operators in the San Juan Basin to use a lined pit to dump the wastewater churned up by drilling. If the drilling site is near a water well, the wastewater must be contained in a closed-loop system for reuse, or be trucked offsite. In May 2012, the Oil Conservation Commission began reviewing amendments that would soften the requirements, spurred by energy companies. The industry-supported amendments would roll back the closed-loop containment requirement and make it easier for companies to establish one large waste pit for multiple wells, among other adjustments.

According to state data, almost 400 pits in New Mexico had contributed to groundwater contamination as of 2008. In testimony in 2010, former Oil Conservation Division Director Mark Fesmire said there had been no cases of contamination documented since the pit rule was established, but data to verify the statement was not available before deadline. Supporters of the pit rule say they are already planning an appeal of what will likely be a "pro-industry" ruling.[27]

In April 2013, researchers at the Seismological Society of America's annual meeting presented findings that an ongoing earthquake swarm in New Mexico and Colorado was due to underground wastewater injection, including Colorado's largest earthquake since 1967. The reported earthquakes are concentrated near wastewater injection wells in the Raton Basin. Companies there have been extracting methane from underground coalbeds. The basin stretches from northeastern New Mexico to southern Colorado.[28]

The Environmental Integrity Project report on diesel and hydraulic fracturing found from 2010 to July 2014 drillers in the state of New Mexico reported using 12,808.25 gallons of diesel injected into 40 wells. The Environmental Integrity Project extensively researched diesel in fracking. The organization argues that diesel use is widely under reported.

The Environmental Integrity Project 2014 study "Fracking Beyond The Law, Despite Industry Denials Investigation Reveals Continued Use of Diesel Fuels in Hydraulic Fracturing," found that hydraulic fracturing with diesel fuel can pose a risk to drinking water and human health because diesel contains benzene, toluene, xylene, and other chemicals that have been linked to cancer and other health problems. The Environmental Integrity Project identified numerous fracking fluids with high amounts of diesel, including additives, friction reducers, emulsifiers, solvents sold by Halliburton.[29]

Due to the Halliburton loophole, the Safe Drinking Act regulates benzene containing diesel-based fluids but no other petroleum products with much higher levels of benzene.[30]

Retrieved from "https://www.gem.wiki/w/index.php?title=New_Mexico_and_fracking&oldid=64673"
Categories:
This page was last edited on 25 December 2019, at 22:30.
Content is available under Creative Commons Attribution-NonCommercial-ShareAlike unless otherwise noted.
Privacy policy
About Global Energy Monitor
Disclaimers