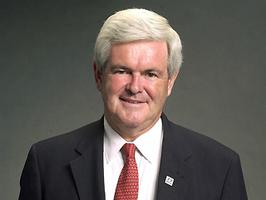 Newton Leroy Gingrich (born June 17, 1943) is a neoconservative politician who is best known as the Speaker of the U.S. House of Representatives from 1995 to 1999. As a co-author of the notorious 1994 Contract With America, Gingrich was in the forefront of the Republican Party's success in the 1994 Congressional elections, and was subsequently elected Speaker. After he returned to private life, Gingrich remained active in neoconservative politics, becoming a fellow at both the American Enterprise Institute (AEI)[1] and the Hoover Institution,[2][3] two of the big guns in the neoconservative think tank world. He is reputed to be a member of the Council on Foreign Relations and to have ties to the Manhattan Institute for Policy Research.

Gingrich also founded the Gingrich Group, which, according to his personal website,[4] is "a communications and consulting firm that specializes in transformational change", and the Center for Health Transformation, a Gingrich Group project launched in 2003.

Gingrich, a "well-paid broker of ideas and influence in the field of health care policy. ... has become probably the most visible spokesman for a set of ideas about health care that is gaining support in the Bush administration and in business," the New York Times said in January 2005.[5]

With the election of George W. Bush, Newt Gingrich was tapped to serve on the Pentagon’s Defense Policy Board, a think tank for the U.S. Department of Defense dominated by neoconservatives and criticized because of the perceived conflicts of interests of its members, many of whom have strong ties to defense contractors that could benefit from sensitive information gleaned at policy board meetings. Gingrich is one of only eight Hoover fellows with seats on the 31-member board.[6]

In 1989, a U.S. tax court took the unusual step of denying a request for tax-exempt status for a group Gingrich formed, the American Campaign Academy, whose mission was to train political operatives. The IRS ruled that the academy was partisan because it served "the private interests of Republican party entities rather than public interests exclusively."

In January, 1997 Gingrich faced ethics charges related to his use of charitable organizations to subsidize his partisan political activities. It was revealed that Gingrich and his top consultants had repeatedly attempted to use tax-deductible charitable donations to help promote political goals. The same month, the House of Representatives voted 395 to 28 to reprimand Gingrich, then Speaker of the House, and ordered him to pay an unprecedented $300,000 fine for ethical wrongdoing. Gingrich was charged with using a college course that he taught, called "Renewing American Civilization," to further his political agenda. When the House Ethics Committee questioned him about it, Gingrich made false ("glaringly inconsistent") statements regarding the charges. Five Democrats said they voted "present" -- neither for nor against the reprimand -- because they believed the sanction was not severe enough. It was the first time in the House's history that it had ever disciplined a speaker for ethical wrongdoing. [7] [8]

In December, 1998 Gingrich completed payment of a $300,000 penalty imposed for violations of House rules. Gingrich initially planned to pay the fine with a $300,000 loan from former Senate majority leader Robert J. Dole (R-Kan.). After Democrats and some commentators argued the loan was a "sweetheart deal" and amounted to a gift, Gingrich said he paid "through wholly personal funds." Gingrich admitted he misled the Committee on Standards of Official Conduct and should have sought better legal advice before using tax-exempt organizations to advance his political goals. [9] [10]

In October, 1998 the ethics committee dropped the three remaining of the 85 ethics charges on Gingrich. The ethics panel decided to take no further action because there was no evidence that "Rule 45" violations were continuing in the speaker's office. [11]

In December 1999, The IRS cleared the Progress and Freedom Foundation of charges that it violated its tax-exempt status when it helped fund the college course "Renewing American Civilization" taught by Gingrich. [12]

"I raised so much money over the years, from so many different people that ... I don't owe anyone."—Newt Gingrich, quoted by MotherJones.[16]

"Far from owing no one, House Speaker Newt Gingrich has built his power base through a series of dubious transactions that look like political paybacks. At the center of Newt's political machine is GOPAC, which has raised and spent more than $8 million since 1991 while skirting the federal election laws governing PACs to avoid naming its donors."[16]

In August 2010, Salon.com released their findings on who is funding Gingrich's primary political committee, a 527 group called American Solutions for Winning the Future. Salon found a significant chunk of the group's funding comes from oil and gas and coal companies, according to the its IRS filings. American Solutions has run national TV ads opposing cap-and-trade bills.[17]

According to Salon, American Solutions has taken in over $20 million as of the 2010 election cycle. Here are some of the group's biggest funders:[17]

"[Gingrich's] basic point: where are the Iraqi faces in the New Iraq? 'Americans can't win in Iraq,' he says. 'Only Iraqis can win in Iraq'.[19]

"Gingrich argues that the Bush administration has been putting far too much emphasis on a military solution and slighting the political element. 'The real key here is not how many enemy do I kill. The real key is how many allies do I grow,' he says. 'And that is a very important metric that they just don't get.' He contends that the civilian-run CPA is fairly isolated and powerless, hunkered down inside its bunker in Baghdad. The military has the money and the daily contact with the locals. But it's using the same tactics in a guerrilla struggle that led to defeat in Vietnam."

"Gingrich faults the Americans for not quickly establishing some sort of Iraqi government, however imperfect. 'The idea that we are going to have a corruption-free, pristine, League of Women Voters government in Iraq on Tuesday is beyond naivete,' he scoffs. 'It is a self-destructive fantasy'".

War in Iraq as WWIII?

In July 2006, Bill Berkowitz reported for Inter Press Service: "For years, U.S. neoconservatives have been ratcheting up the rhetoric -- mostly in small gatherings and on partisan web sites -- claiming that terrorist activities around the world constituted the initial stages of a new world war. But during the past week or so ... Newt Gingrich, the former speaker of the United States House of Representatives, is using any platform available to him to convince the public that the U.S. is engaged in World War III. ... While Gingrich's media tour definitely thrust him back into the national political spotlight, it may have also given the public a sneak peek into the Republican Party's political/marketing strategy for the November congressional elections: If the war on terrorism doesn't create a fearful enough climate amongst voters, why not ratchet it up by mentioning the spectre of a World War III?" ... John Stauber, co-author of the book, The Best War Ever, told IPS "'You've got to call it something and five years after 9/11 with Osama [bin Laden] still roaming free and Iraq an American quagmire, and the Republican Party in danger of losing control of Congress, this ploy makes marketing sense.'"[20]

Retrieved from "https://www.gem.wiki/w/index.php?title=Newt_Gingrich&oldid=97018"
Categories:
This page was last edited on 10 January 2012, at 01:07.
Content is available under Creative Commons Attribution-NonCommercial-ShareAlike unless otherwise noted.
Privacy policy
About Global Energy Monitor
Disclaimers