The Northern Peruvian Oil Pipeline, known in Spanish as the Oleoducto Norperuano and frequently referred to by its initials ONP, is an oil pipeline in Peru.[1]

The pipeline originates in Loreto department in Peru's Amazon Basin. It has two branches at its eastern end, beginning at the Andoas and San José de Saramuro gathering stations, respectively. At Estación 5 (Pumping Station 5), these two branches converge to form a single pipeline that continues southwest to the Bayóvar terminal on Peru's Pacific Coast (Piura department).[2][3] The pipeline passes through the departments of Loreto, Amazonas, Cajamarca, Lambayeque and Piura.[4] 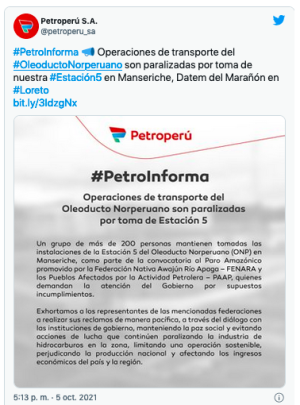 The Oleoducto Norperuano is Peru's longest pipeline. It began operating on May 24, 1977.[4]

The pipeline is divided into three sections:

Transport of oil through the pipeline suffered new disruptions in 2020 due to falling oil prices, the Covid-19 pandemic, and protests by indigenous groups. Three of Peru's major oil producers - Argentina's Pluspetrol, Anglo-French Perenco, and Canada's Frontera, shut down production in Blocks 8, 67, and 192, respectively, when the pandemic took hold in March 2020, and the operations of all three companies remained suspended as of January 2021.[9]

A June 2020 agreement between pipeline operator Petroperú and the PetroTal oil company called for resumption of production at the Bretaña oil field in Lot 95, with anticipated volumes of 10,000 bpd for the remainder of 2020 and 20,000 bpd in 2021.[10] In January 2021 PetroTal announced that it would ship 220,000 barrels of Peruvian crude by barge to Brazil in February to test river transport as an alternative to the Norperuano pipeline, in light of the ongoing challenges posed by pipeline ruptures, blockades, and sabotage.[9]

In early January 2021, Petroperú announced that it had reopened the entire Norperuano pipeline for the first time since September 2020, following months of protests that had shut down operations.[11]

In October 2021 new protests by the Awajún and Saramuro indigenous communities led to an 84-day shutdown of pipeline operations.[12][13][14] On December 17, Petroperu regained control of pumping station 5, which had been occupied by protestors since October 4, and the pipeline was returned to service in late December following negotiations between Petroperu, Peruvian government officials, and the affected indigenous groups.[15] In early January, members of the Saramurillo community lifted a separate blockade affecting port facilities at pumping station 1, in exchange for promises from Petroperú, Petrotal and the Peruvian government to build a community center and implement improvements in local health, education, and electrical service.[16][17]

In March 2022, severe weather in the Cajamarca region led to a new suspension of service while Petroperú crews worked to verify the integrity of several sections of pipeline exposed by heavy rains.[18]

Video: 20 years of oil spills in the Peruvian Amazon (in Spanish)

The Oleoducto Norperuano has a substantial history of spills. A 2020 report co-published by Oxfam and the Peruvian human rights group CNDDHH documents a total of 94 spills along the ONP between 2000 and 2019, half of which were caused by corrosion, faulty maintenance, operational errors, and unsafe conditions attributable to pipeline operator Petroperú. An additional 34.8% of the spills were attributed to "third parties," while 15.7% of the spills were due to natural causes. The frequency of spills along the ONP and associated oil development parcels in the Peruvian Amazon has increased dramatically in recent years.[19]

Other sources that have documented the high incidence of spills along the ONP include Peru Reports, which cited 23 spills and leaks along the ONP between 2011 and 2017[20], and Environmental Justice Atlas, which recorded at least 20 spills between 2016 and 2019.[21]

In August 2016, Peru's government ordered the closure of the ONP following three spills that released thousands of barrels of oil into rivers in the Loreto and Amazonas regions over a period of five months.[20][22] In response to the spills, Petroperú was fined $3.5 million and the company's president German Velasquez was fired.[20] The pipeline reopened in September 2017.[23]

The spills have been contentious for a number of reasons, including their impacts on local villages that rely on rivers for drinking water and other essential uses. Petroperú was also criticized following the January and February 2016 spills following the release of photographs depicting children working to clean up the spills, with Petroperú paying $2 per bucket of oil collected.[22] 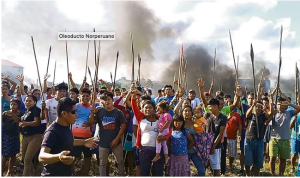 Since the ONP's inception, concerned citizens have sought to draw attention to the pipeline's negative impacts on indigenous communities and the environment, and the pace of protests has increased in recent years.

In February 2019, members of four indigenous Quechua communities near the pipeline (Andoas, Nuevo Andoas, Porvenir and Jardines) took over the Andoas airfield to protest Petroperú and Frontera Energy's failure to supply electricity and water to local residents as promised.[28]

Frustration with Petroperú and its pollution of local rivers provoked further protests and strikes following the June 18, 2019 oil spill. Over the following month, 54 Amazonian indigenous federations joined the protests, eventually taking over one of Petroperú's local headquarters by force on July 6. Indigenous leaders agreed to suspend their protests in mid-July after representatives of the Peruvian government, including Minister of Energy and Mines Francisco Ísmodes, met with them and promised to investigate the ongoing oil spills.[24]

In July 2019, the Peruvian environmental agency OEFA (Organismo de Evaluación y Fiscalización Ambiental) fined Petroperú US$25 million for failure to maintain the pipeline and for damages caused to indigenous communities, flora and fauna in the pipeline's path.[21]

In August 2020, indigenous groups staged new protests at a pumping station along the Norperuano pipeline and at Block 95, an oil field administered by the Canadian company PetroTal, demanding that the government comply with its promises to provide electricity, drinking water, and a sewage treatment plant. Three indigenous protestors were killed in the ensuing confrontation with police, which also resulted in injuries to 11 protestors and six police officers.[29] Protestors armed with spears occupied the pumping station for two weeks, relinquishing control only after being promised medical attention for coronavirus and other forms of socio-economic support.[30]

In September 2020, indigenous groups again staged protests and blockades demanding health and social support measures in the face of the coronavirus, prompting Petroperú to evacuate two of its stations in the Loreto region and bringing pipeline operations to a halt. Amidst the protest, Pablo de la Flor, executive director of the SNMPE (National Society of Mining, Petroleum and Energy) noted that oil production in the region had been reduced by two thirds in 2020 compared to 2019.[30] Protestors maintained their blockade of pumping station 5 for 85 days before the Peruvian government reassumed control in late December 2020, allowing normal pipeline operations to resume by early January 2021.[9][11]

In March 2021, ten employees working at the Morona Station along the pipeline were kidnapped as a result of continued anger over State shortcomings to meet social demands.[31]

In October 2021, 200 protestors supported by the indigenous rights groups Fenara (Federación Nativa Awajún Río Apaga) and PAAP (Pueblos Afectados por la Actividad Petrolera) seized control of Norperuano Pipeline's station 5 in northern Peru's Loreto region, shutting down pumping operations and prompting the evacuation of Petroperú workers. The protestors established an encampment at the station, calling on Petroperú and the Peruvian government to honor past promises of economic and social support to communities impacted by oil operations in the area.[12][13][14]

As of November 2021, pipeline operations remained paralyzed and Petroperú announced that it had evacuated its workers from station 5 in response to continued protests by the Saramuro indigenous community.[32] In late November 2021 Canadian-owned Petrotal reported that its river-borne shipments of Peruvian crude to Brazil had also been disrupted, noting that the ongoing social unrest could lead to a full shutdown of oil operations at its Block 95 concession.[33]

In October 2022, following the September oil spill which contaminated the Marañón River, indigenous activists blocked cargo and passenger vessels in the town of Cuninico, stating that despite the issued state of emergency, they had yet to receive food and water aid 21 days after the oil spill.[26] Community authorities also announced an indefinite strike at the pipeline's Station 1, as well as the possibility of electrical cut-offs.[34] In response to these protests, Petroperú ordered the evacuation of all personnel from Station 1, citing concerns for worker safety.[35]