Smog is the chemical reaction of sunlight, nitrogen oxides (NOx), and volatile organic compounds (VOCs) in the atmosphere, which leaves airborne particles (particulate matter) and ground-level ozone (smog). Ground level ozone - an invisible gas made of three oxygen atoms (O3) - is therefore not emitted directly into the air, but is created by chemical reactions between NOx and VOCs in the presence of sunlight.[1]

Nitrogen oxides are released by nitrogen and oxygen in the air reacting together under high temperature such as in the exhaust of fossil fuel-burning engines in cars, trucks, coal plants, and industrial manufacturing factories. VOCs are released from man-made sources such as gasoline (petrol), paints, solvents, pesticides, and biogenic sources, such as pine and citrus tree emissions.[1][2]

The characteristic brown coloration for smog is due to the NOx in the photochemical smog.[1]

This noxious mixture of air pollutants can include the following:[1]

All of these chemicals are usually highly reactive and oxidizing. Photochemical smog is therefore considered to be a problem of modern industrialization. It is present in all modern cities, but it is more common in cities with sunny, warm, dry climates and a large number of coal plants and motor vehicles.[3] Because it travels with the wind, it can affect sparsely populated areas as well, leading to the EPA proposed Transport Rule.

A 2011 study by the Union of Concerned Scientists "Climate Change and Your Health: Rising Temperatures, Worsening Ozone Pollution" projected future climate-induced temperature increases on the relationship between ozone concentrations and temperature to explore the potential “climate penalty on ozone pollution.”

Ozone (smog) reacts chemically ("oxidizes") with internal body tissues, such as those in the lung, which the American Lung Association describes as a "sunburn" on the lungs. Ozone irritates and inflames the respiratory system at levels frequently found across the nation during the summer months. Breathing ozone may lead to:[4]

Children who grow up in areas of high ozone pollution may never develop their full lung capacity as adults. That can put them at greater risk of lung disease throughout their lives.[9]

Recent research suggests that nitrogen oxides and particulate matter (PM2.5), along with other pollutants, are associated with hospital admissions for potentially fatal cardiac rhythm disturbances. Cities with high NO 2 concentrations have death rates four times higher than those with low NO 2 concentrations, suggesting a potential correlation. There are also cardiovascular effects from long-term air pollution exposure. Exposure to chronic air pollution over many years increases cardiovascular mortality, a correlation that remains significant even while controlling for other risk factors like smoking.[10]

According to a 2009 Physicians for Social Responsibility report, the nervous system is also a target for coal pollution’s health effects, as the same mechanisms thought to mediate the effect of air pollutants on coronary arteries also apply to the arteries that nourish the brain. These include stimulation of the inflammatory response and oxidative stress, which can lead to stroke and other cerebral vascular disease.[10]

Acting under federal court order, the Obama administration proposed new air-quality rules on July 6, 2010, for coal-burning power plants, the Transport Rule. The pollutants being singled out in the new rule making — sulfur dioxide and nitrogen oxides — react in the atmosphere to form fine particulates and ground-level ozone (smog). They are easily carried by the wind and affect states and cities far downwind from the plants where they are produced. The proposed regulation, called the Transport Rule, would apply to power plants in 31 states east of the Rockies, with the exception of the Dakotas, Vermont, New Hampshire and Maine. The proposed rules will replace the EPA's 2005 Clean Air Interstate Rule.[11][12]

Gina McCarthy, head of the EPA’s air and radiation office, said the new rules would reduce emissions of sulfur dioxide and nitrogen oxides by hundreds of thousands of tons a year and bring $120 billion in annual health benefits. Those benefits, Ms. McCarthy said, include preventing 14,000 to 36,000 premature deaths, 23,000 nonfatal heart attacks, 21,000 cases of acute bronchitis, 240,000 cases of aggravated asthma and 1.9 million missed school and work days. Additionally, the rule would substantially reduce unhealthy smog. The cost of compliance to utilities and other operators of power plants would be $2.8 billion a year, according to E.P.A. estimates.[11]

The proposed regulation will require utilities operating coal-burning plants to install scrubbers and other technology to reduce emissions of the pollutants. Some companies may decide to retire older plants rather than invest in new control measures because other new rules under the Clean Air Act are expected in the coming years. The new rules do not address power plant emissions of carbon dioxide and five other pollutants that contribute to global warming. The Obama administration is moving forward with a plan to phase in regulation of such heat-trapping gases, a move that is being challenged in Congress and in the courts.[11]

The Ozone National Ambient Air Quality Standards (NAAQS) refers to proposed EPA regulations on ground-level ozone, a primary ingredient in smog linked to respiratory illnesses. In January 2010, EPA Administrator Lisa Jackson said tightening the nation's air-quality standard for ozone was "long overdue," and would save an estimated 12,000 lives a year and yield health benefits up to $100 billion annually in 2020. The EPA proposed setting the standard at between 60 and 70 parts per billion, down from the current 75 ppb, by the end of 2010.[13]

The EPA's proposal has the support of the American Lung Association and the American Medical Association, and is consistent with the recommendation of a 23-member panel of clean-air experts who advised the agency on the issue after reviewing more than 1,700 studies.[13]

In December 2010, the EPA said that it will not decide until July 2011 whether to tighten the national air-quality standard for ozone. In a Dec. 8 written statement, the EPA said it would ask the panel of clean-air experts for "further interpretation" of the studies they relied upon in making their recommendation, so as to ensure the agency's final decision "is grounded in the best science."[13]

In a written statement after the EPA delay, the American Lung Associations said it was "exploring legal options" aimed at requiring the EPA to make a decision on the issue. Based on EPA's own estimates, the group added, a six-month delay means an estimated 2,000 to 6,000 people "will lose their lives because they must breathe air pollution that would have been cleaned up if the EPA had met its most recent deadline of December 31, 2010."[13]

On September 2, 2011, the White House announced that it was overruling the Environmental Protection Agency’s plan to adopt a stricter standard for ground-level ozone until a scheduled reconsideration of acceptable pollution limits in 2013.[14] The 468-page rulemaking package prepared by the agency before the move by the White House shows that the EPA wanted to set the national air quality standard for ozone at 70 parts per billion.[15] On October 11, 2011, Earthjustice, the American Lung Association, the Environmental Defense Fund and others sued the administration for directing the Environmental Protection Agency to kill the draft Ozone standard, saying the decision was based on politics instead of protecting peoples' health as the Clean Air Act requires.[16] 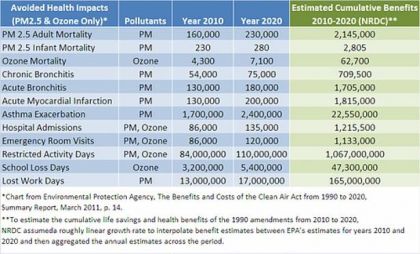 Retrieved from "https://www.gem.wiki/w/index.php?title=Smog&oldid=237452"
Categories:
This page was last edited on 30 April 2021, at 11:05.
Content is available under Creative Commons Attribution-NonCommercial-ShareAlike unless otherwise noted.
Privacy policy
About Global Energy Monitor
Disclaimers