The pipeline would run from Malin, Oregon, to the proposed Jordan Cove LNG terminal in Coos Bay, Oregon.

The Pacific Connector Gas Pipeline would carry natural gas from near Malin, Oregon, to the proposed Jordan Cove LNG Terminal in Coos Bay, OR, allowing for the export of fracked natural gas from the Rocky Mountains.[5] Veresen Inc. first submitted an application to FERC to build the pipeline in June 2013. This application and a May 2013 application to build the Jordan Cove LNG Facility in Coos Bay, OR, were rejected in March 2016,[6] marking the first time in its history that FERC had rejected a proposal to build a pipeline.[7] FERC's rejection stated that the company had failed to demonstrate a need for the pipeline and that the two projects were not "required by the public convenience."[6] In December 2016 FERC rejected a request by Veresen to reconsider its March 2016 denial of the pipeline and LNG facility.[8]

In April 2017, Gary Cohn, the new Director of President Trump's National Economic Council declared, "The first thing we’re going to do is we’re going to permit an LNG export facility in the Northwest."[9] As noted by The Washington Post, it is unclear what Cohn meant by "we're going to permit" given that approval of the project must come from FERC.[9] In September 2017 Veresen announced that it had applied again to build the pipeline and LNG facility, with a planned in-service date of 2024 for both.[10] "There’s a good chance that the FERC will take a different stance under this administration," said Chris Cox, equity analyst at Raymond James Ltd, in a Sep. 21, 2017 article in Bloomberg News.[11]

In May of 2019, the Oregon Department of Environmental Quality denied a Clean Water Act permit for a natural gas pipeline and export facility in Southern Oregon. DEQ said Pembina failed to demonstrate that construction and maintenance of the pipeline and export facility wouldn’t harm waterways and fish habitat. The project could increase erosion and landslide hazards, DEQ said in an evaluation and findings report. Pembina can apply again and submit new information to address the reasons for the denial, but opponents of the project called the denial a potentially fatal blow to the project, which is also being reviewed by the Federal Energy Regulatory Commission. DEQ officials said they received approximately 42,000 public comments during the agency’s review of the project.[12]

In February of 2020, FERC commissioners voted "2 to 1 to postpone a decision on federal approvals for the project after a string of permit denials from the state of Oregon. "[14]

However, in March of 2020, the Federal Energy Regulatory Commission (FERC) voted 2-1 to conditionally approve the Jordan Cove LNG Terminal and the related Pacific Connector Gas Pipeline, which would send gas to the export terminal. FERC rejected the proposal in 2016, but cited that the pipeline project now has agreements for 95.8% of capacity, which the FERC chairman argues justifies the approval and the use of eminent domain. However, numerous market challenges remain for development, and the state of Oregon has declined to sign off on necessary regulatory approvals, including a quality certification and coastal zone management determination. However, FERC may find that national interest outweighs state interests, and would have the authority to waive the state regulations.[15]

In April 2021, Pembina notified a US appeals court it was pausing development of the Jordan Cove LNG Terminal and the Pacific Connector Gas Pipeline to assess the impact of recent regulatory decisions that could threaten the future of the projects.[3] This was followed up in May 2021, following further state reversals of two of Jordan Cove's dredging permits, by confirmation from Pembina that development of Jordan Cove is officially on pause. Donald Sullivan, the project's manager, filed a letter with FERC citing a laundry list of state permit denials that prevent the project from moving forward despite a federal approval from the agency. Sullivan's letter noted: "Applicants have decided to pause the development of the Project while they assess the impact of these decisions".[16] 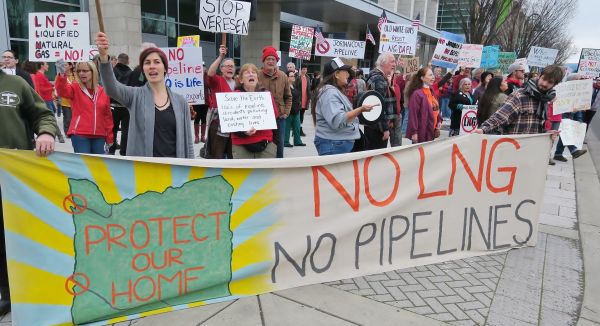 Citizens Rally against Jordan Cove LNG Project in Medford, OR on March 23, 2017

The pipeline and LNG facility have been opposed by residents, landowners, and conservation groups. Landowners along the route proposed in 2013 testified to FERC that the pipeline would negatively impact land values, farming, timber operations, and oyster harvesting.[17]

In September 2016 the Klamath Tribal Council issued a letter in opposition to the project.[8] In October 2016 members of local tribes and the Karuk Tribe of California staged a protest of the projects in Klamath Falls, OR.[8] Chief Walking Eagle Thom, of the Karuk Tribe, said the pipeline was “all about money” and said such greed was “like a disease.”[8] In March 2017, approximately 200-400 protesters gathered in Medford, OR, to protest attempts to revive the pipeline and LNG facility, including members of the Yurok, Hoopa, Karuk, Modoc, and Klamath Tribes of northern California and southern Oregon.[18] Thomas Joseph II of the Hoopla tribe stated: "“We live on 10,000 year-old ancestral land along the Trinity River, which is a tributary of the Klamath River. What affects the Klamath affects us.”[18]

In December 2017 U.S. Senator Jeff Merkley (D-OR), a previous supporter of the pipeline and LNG facility, announced his opposition to the two projects in an op-ed in the Medford Mail Tribune, citing the pollution they would generate in Oregon and in countries to which natural gas was exported.[19] "In 2012 the company touted its intention to procure clean, offshore wind energy to help power the terminal. That option is no longer on the table. As now planned, the terminal would become the largest carbon polluter in Oregon, with emissions equivalent to putting half a million gas-powered cars on the road. And it is no longer true that the LNG shipped to Asia would reduce pollution. Since 2012 we have learned more about natural gas escaping from fracking fluids and gas pipelines, which by many estimates makes it at least as carbon-polluting as coal. When that LNG is burned in Asia, it would generate carbon pollution equal to an additional 3 million gas-powered cars on the road. Additionally, global energy markets have evolved dramatically. Non-carbon alternatives such as solar and wind are now highly competitive. With a renewable energy future within reach, it makes little sense to help Asia leap from coal to natural gas, locking in carbon pollution for decades."[19]

In January 2018 a report by Oil Change International found that the pipeline and LNG facility project would result in over 36.8 million metric tons of carbon dioxide equivalent (CO2e) per year.[20] The report also stated that the two projects would "make it impossible to achieve Oregon Governor Kate Brown’s goal to have Oregon’s climate reductions line-up with the targets of the Paris Accords, as well as the emission reduction goals enshrined by the Oregon legislature in 2007.[20]

Retrieved from "https://www.gem.wiki/w/index.php?title=Pacific_Connector_Gas_Pipeline&oldid=261415"
Categories:
This page was last edited on 27 August 2021, at 23:03.
Content is available under Creative Commons Attribution-NonCommercial-ShareAlike unless otherwise noted.
Privacy policy
About Global Energy Monitor
Disclaimers