The map below shows the location of of the plant, in Pasir Village, Pangkalan Susu District, Langkat Regency, North Sumatra Province.[1]

The introduction of the plant was delayed in February 2015, after steel was stolen from the three of the plant's transmission towers, causing them to collapse.[7] It was unclear whether the person responsible was trying to steal and sell the metal, or trying to stop the plant from operating.[4]

In August 2018 PT PLN Persero announced that Units 1 and 2 of the plant would henceforth be operated by Indonesia Power.[8]

In July 2013, PLN announced that it had signed a construction contract with Chinese company Sinohydro to build two additional 200-MW coal-fired units at the plant. At the time, PLN stated that it hoped to bring both units into operation in early 2017.[9] In June 2014, the Indonesian Ministry of Finance approved financing arrangements for the two units' construction. An updated construction schedule was not given at the time.[10]

Financing for Units 3 and 4 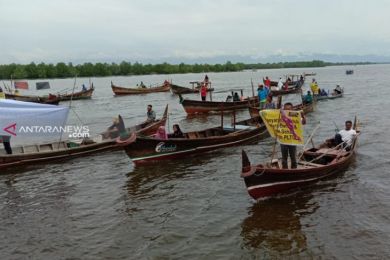 In June 2019 fisherfolk staged a protest near the plant and called on the government to close the plant and move away from using fossil fuels. Protestors blamed the existing Pangkalan Susu plant for contributing to the deforestation of mangrove forests, increased soil erosion, lost water sources, and air pollution.[16]

In February 2021, The Clean North Sumatra Community Alliance held a protest in front of PLN's offices demanding an investigation into the Pangkalan Susu power station. The protesters claim that the power station is engaging in corrupt practices, including marking up prices and attempting to monopolize local labor markets.[17]

Retrieved from "https://www.gem.wiki/w/index.php?title=Pangkalan_Susu_power_station&oldid=253007"
Categories:
This page was last edited on 28 June 2021, at 03:25.
Content is available under Creative Commons Attribution-NonCommercial-ShareAlike unless otherwise noted.
Privacy policy
About Global Energy Monitor
Disclaimers