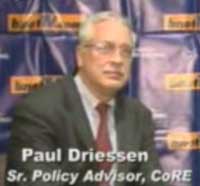 Paul K. Driessen is a senior fellow with the Committee for a Constructive Tomorrow, Center for the Defense of Free Enterprise, Frontiers of Freedom, and Atlas Economic Research Foundation, and is director of the Economic Human Rights Project. He's also identified as a senior policy advisor to the Congress of Racial Equality (CORE).[1]

A biographical note at Townhall.com states that "is senior policy advisor for the Congress of Racial Equality and Center for the Defense of Free Enterprise, two groups that have received some ExxonMobil support for work by him and others on malaria eradication, Third World agriculture and economic development, climate change, and other issues."[2]

Driessen co-authored a book titled, "Energy Keepers, Energy Killers: The New Civil Rights Battle," along with Alan Gottlieb, Sean Hannity and Roy Innis of CORE. It was published in February 2008 by Merril Press. [3]

Driessen is co-editor of Capital PR News, the newsletter of the nation's largest chapter of the Public Relations Society of America. He is also principal of Global-Comm Partners, a Northern Virginia public relations firm specializing in energy and environmental public policy issues, which now (2004) appears to be defunct.[4]

In a biographical note, Driessen states he "received his BA in geology and field ecology from Lawrence University, JD from the University of Denver College of Law, and accreditation in public relations from the Public Relations Society of America."[5]

The biographical profile states he had a 25-year career that included working for the United States Senate, the Department of the Interior and an unspecified "energy trade association".[5]

"He has spoken and written frequently on energy and environmental policy, global climate change, corporate social responsibility and other topics. He's also written articles and professional papers on marine life associated with oil platforms off the coasts of California and Louisiana - and produced a video documentary on the subject," his biographical note states.[5]

As with other environmental sceptics, such as Bjorn Lomborg, Driessen invokes membership of environmental groups to add weight to his critique of the the environmental movement. Driessen claims to have been "a former member of the Sierra Club and Zero Population Growth".[5]

According to his biographical note "he abandoned their cause when he recognized that the environmental movement had become intolerant in its views, inflexible in its demands, unwilling to recognize our tremendous strides in protecting the environment, and insensitive to the needs of billions of people who lack the food, electricity, safe water, healthcare and other basic necessities that we take for granted."[5]

In November 2003, Driessen published Eco-Imperialism: Green Power Black Death. He continues to speak regularly on the subject of "Eco-Imperialism" in the media.

"Paul has produced publications, actively participated in Atlas meetings and workshops, and coordinated international research and educational programs on global warming, solid waste management and a variety of other topics. He is well liked and works effectively with Atlas staff, corporate executives, and personnel from both here in the United States and overseas."

On February 4, 2004 Driessen testified before the House of Representatives Subcommittee on Energy and Mineral Resources, "on the subject of science, Eco-Imperialism and public policy".[7]

"He joined a number of other distinguished scientists and policy experts in what was a wide-ranging and provocative discussion," he states on his website. Those giving testimony with him were Niger Innis, Cyril Boynes, Jr. of the Congress of Racial Equality and Fifi Kobusingye-Boynes from Uganda.[7]

Paul Driessen is a speaker at the America First Energy Conference to be held on November 9th, 2017. [1]

Retrieved from "https://www.gem.wiki/w/index.php?title=Paul_Driessen&oldid=235780"
Categories:
This page was last edited on 30 April 2021, at 11:03.
Content is available under Creative Commons Attribution-NonCommercial-ShareAlike unless otherwise noted.
Privacy policy
About Global Energy Monitor
Disclaimers