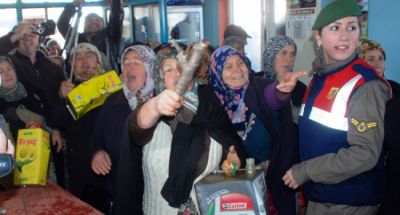 Protesters at a permitting meeting for the Şevketiye Lapseki coal plant in Adatepe in February 2013.[1]

Kaptan Demir Çelik Endüstrisi, a subsidiary of the Kaptan Şirketler Group, currently has plans to build a 1,320-MW coal-fired power plant in northern Çanakkale province. The plant would be located near the 1,280-MW coal-fired Kirazlıdere power complex. The project will include a deep sea port.[2]

An environmental permitting meeting in Adatepe in February 2013 was disrupted by about 500 protesters, led by local women banging on metal cans. Protesters argue that the region is ideally suited for wind and solar energy production, which they would prefer. The gendarmerie was needed to restore order.[1][3][4]

The EIA process was said to be continuing, according to an official answer by parliamentary question in May 2013.[5]

The plant has been the subject of public opposition, due to the large amount of coal proposals in the area.[6]

As of June 2019 the project is no longer on the Turkey Energy Market Regulatory Authority website, meaning it is not seeking a generation license, nor a list of pending EIAs. The project appears to be cancelled.[7]

Retrieved from "https://www.gem.wiki/w/index.php?title=Şevketiye_Lapseki_power_station&oldid=239613"
Categories:
This page was last edited on 30 April 2021, at 11:08.
Content is available under Creative Commons Attribution-NonCommercial-ShareAlike unless otherwise noted.
Privacy policy
About Global Energy Monitor
Disclaimers