Sino-Myanmar Oil Pipeline is an oil pipeline in Myanmar and China.[1]

The pipeline originates at the Made Island Oil Terminal at Kyaukphyu Port, Myanmar, and terminates at the Kunming Refinery in Kunming, Yunnan, China.

Sino-Myanmar pipelines refers to planned oil and natural gas pipelines linking Myanmar's deep-water port of Kyaukphyu (Sittwe) in the Bay of Bengal with Kunming in Yunnan province of China. Talks between China and Myanmar on the feasibility of the project began in 2004.[2]

The plan to build the oil and gas pipelines was approved by China's National Development and Reform Commission in April 2007.[3] In November 2008, China and Myanmar agreed to build a US$1.5 billion oil pipeline and US$1.04 billion natural gas pipeline. In March 2009, China and Myanmar signed an agreement to build a natural gas pipeline, and in June 2009 an agreement to build a crude oil pipeline.[4] The inauguration ceremony marking the start of construction was held on 31 October 2009 on Maday Island.[5][6]

After several years of delay, the pipeline commenced operations in April 2017 after the government of Myanmar agreed to lower transit fees.[11] The pipeline allows China quicker access to oil produced in the Middle East and Africa by avoiding the need to ship the oil through the Straits of Malacca and into the South China Sea. The pipeline terminates at a PetroChina refinery that has the capacity to process 13 million tons a year.[11]

In October 2020 CNPC's 51% ownership of the pipeline was transferred PipeChina.

The pipeline traverses Ma-De island in Myanmar. Beginning in 2009, residents of Ma-De had their land seized or purchased by the government, and "Fearful of oppression by the junta, most didn't express objections and accepted whatever compensation they were given."[12] According to a November 2015 report by the National Resource Government Institute: "Many villagers still feel unfairly treated; only lands under cultivation were paid for, while plots used for firewood were regarded as 'vacant.' On Ma-De Island, a total of 114 acres belonging to 30 farmers was reportedly seized without compensation." 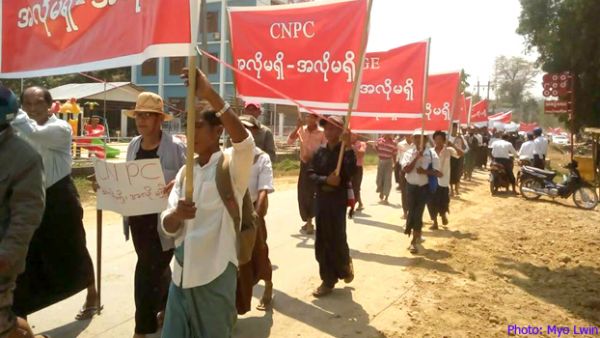 In March 2018 in Rakhine state, Myanmar, approximately 600 people marched to demand compensation for land seized to build the Sino-Myanmar Gas Pipeline and the parallel Oil Pipeline.[13] "Because of this gas pipeline, many villagers lost their land, and CNPC and MOGE haven’t taken any responsibility for it,' said protest leader Zaw Win Lay."[13]

Retrieved from "https://www.gem.wiki/w/index.php?title=Sino-Myanmar_Oil_Pipeline&oldid=237406"
Categories:
This page was last edited on 30 April 2021, at 11:05.
Content is available under Creative Commons Attribution-NonCommercial-ShareAlike unless otherwise noted.
Privacy policy
About Global Energy Monitor
Disclaimers