Plans for the project were cancelled in 2018. Project proponents were instead exploring plans for a gas plant.

The map below shows the city of Chiba, the approximate location where the plant would be built.

In December 2018, Chugoku Electric Power and JFE Steel announced the cancellation of the coal plant, saying they were instead considering project feasibility for joint construction of a natural gas thermal power plant. The cancellation followed sustained public protest of the plant, including opposition by Japan's Environment Minister.[3] 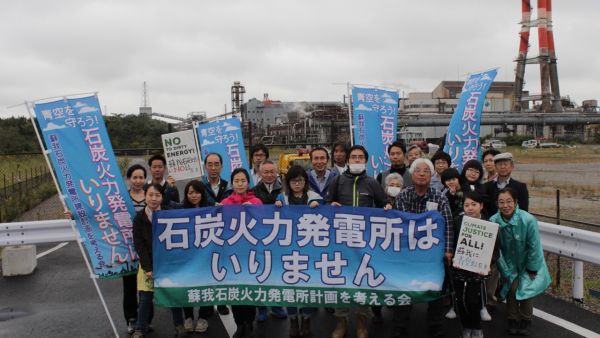 In March 2017, Japan's Environment Minister Koichi Yamamoto expressed concern that building the plant would harm Japan's efforts to reduce carbon emissions as part of its commitment to the Paris climate accords of 2015.[5]

In October 2017, local residents and Friends of the Earth Japan protested the construction of the new Soga plant. According to Friends of the Earth: "Public facilities such as schools and athletic grounds are located within a 5km radius of the planned construction site. If a coal power plant is constructed and begins operations, additional concerns will be raised on the effects of air pollution on local residents. The planned construction site is in an area which experiences environmental improvement after the court rulings during the Aozora Trials. After such victory and consequential improvement, there is a possibility that this land may be contaminated again with pollution if the new coal power plant is constructed.[4]

Retrieved from "https://www.gem.wiki/w/index.php?title=Soga_power_station&oldid=281114"
Categories:
This page was last edited on 5 January 2022, at 16:24.
Content is available under Creative Commons Attribution-NonCommercial-ShareAlike unless otherwise noted.
Privacy policy
About Global Energy Monitor
Disclaimers