The undated satellite photo below shows the rough site of the proposed coal plant, near Aliağa city, Aliağa district, İzmir province. The Star Refinery is being built on the other side of the bluff, about a mile to the southeast of the coal plant's site. 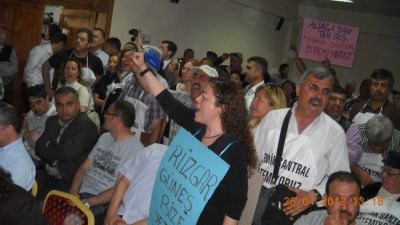 Protesters at a hearing for the Socar Power-2 project in Aliağa in October 2013.[1]

In September 2008, Socar Turkey (a subsidiary of the State Oil Company of Azerbaijan) began work on the Star Refinery, a new oil refinery adjacent to the Petkim petrochemicals facility near Aliağa. The refinery is expected to be completed in 2017.[2]

In May 2012, Socar Power, a subsidiary of SOCAR, applied for final permits to build a coal-fired power plant about a mile away from the refinery site, to help power the refinery's operations. An environmental permitting hearing was held in Aliağa in April 2012. The plant would burn both coal and petroleum coke.[3][4][5] Socar Power hoped to bring the coal plant online simultaneously with the refinery, in 2017.[6]

In September 2013, SOCAR submitted an EIA for the coal plant.[7][8] In July 2013, an initial environmental permit from the Ministry of Environment and Urban Planning was issued. An environmental permitting hearing in Aliağa in October 2013 could not be held after 150-200 angry environmentalists showed up for a hearing in a room that could only hold 50 people.[9] In February 2014, a local court stayed the plant's EIA, ruling that the public hearing process had been insufficient.[1]

In January 2015 it was announced that the oil refinery project had raised US$3.29 billion in debt financing from seven export credit agencies (CESCE, Export Development Canada, the Export-Import Bank of the United States, JBIC, the Korea Trade Insurance Corporation, NEXI, and SACE) and 16 commercial banks.[10]

In October 2016 SOCAR’s management said it had decided not to pursue the coal power plant project. The project had been opposed by civil society groups for years over its environmental and health effects, and close proximity to the ancient city of Kyme.[11] As of December 2019 the project has not progressed in more than four years and appears to be cancelled.

Since 2014, it was reported by Bankwatch that groups like the CEE Bankwatch Network and Re:common warned about the Socar power plant breaching Turkish legislation.[15]

In May 2016, environmentalists had opposed the “EIA positive report” around the Socar thermal power plant. They argued that the Court was wrong in declaring that the EIA was adequate and appropriate. Their appeal was denied by the Administrative Court in Turkey.[16]

By October 31, 2016, environmentalists were ecstatic over the plans to build the Socar power plant were shelved.[17]

Retrieved from "https://www.gem.wiki/w/index.php?title=Star_Refinery_Socar_power_station&oldid=247606"
Categories:
This page was last edited on 31 May 2021, at 19:56.
Content is available under Creative Commons Attribution-NonCommercial-ShareAlike unless otherwise noted.
Privacy policy
About Global Energy Monitor
Disclaimers