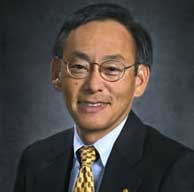 Steven Chu has been appointed by President-elect Barack Obama as Energy Secretary in his administration.[1] He is currently the Director of the Lawrence Berkeley National Laboratory, a position that he has held since the start of August 2004.[2] Since his appointment Chu has repeatedly emphasized the reality and potential severity of human-induced global warming.

To address rising greenhouse gas emissions, Chu has endorsed increased energy efficiency and the need to dramatically expand carbon-free sources of energy. In particular, he supports the expansion of wind and solar, but has identified the need for further research into technologies that will allow storage to allow power use when the wind is not blowing or the sun not shining. He has expressed doubts about the prospects for nuclear fusion within the forseeable future and, while acknowledging significant problems with nuclear fission, supports its expansion as a "Co2 neutral" source of electricity.[3]

He has expressed ambivalence about continued reliance on coal, having stated in early 2007 that "coal is my worst nightmare."[4]While he has expressed doubts about the prospects for carbon capture and storage associated with coal-fired power stations, he has, since his nomination as Energy Secretary by Barack Obama, pledged that he will ensure "greater investment in technology to capture and store carbon emissions from coal-fired power plants."[5] In a hearing on his nomination before the Senate Environment and Natural Resources Committee, Chu stated that "if the world continues to use coal the way it has been—I mean China, India, Russia—then it is a pretty bad dream" but acknowledged that coal is a "very abundant resource". He also stated that he was "hopeful and optimistic that we can figure out how to use coal in a clean way."[6]In September 2010, as elections heated up for Democrats in West Virginia, Chu said he would "save coal" by investing billions into carbon capture and storage (CCS) technology: "We are the Saudi Arabia of coal...No one is going to turn their back on coal. The issue is how to use coal in a clean way."[7]

A biographical profile distributed by the Obama transition team stated that Chu is "director of Lawrence Berkeley National Lab, and professor of physics and molecular and cellular biology at University of California, Berkeley. Winner of the Nobel Prize for physics in 1997, Dr. Chu served on the technical staff at AT&T Bell Labs (1978 –1987) and was a professor in the Physics and Applied Physics Departments at Stanford University (1987 – 2004). One of the world's most distinguished scientists, Dr. Chu commands deep respect from his peers, deftly manages a complex governmental organization, and has a keen sense of public service. He successfully applied the techniques he developed in atomic physics to molecular biology, and since 2004, motivated by his deep interest in climate change, he has transformed the Lawrence Berkeley National Lab into a broad and innovative research program on energy technologies. He has a BS in physics from the University of Rochester and his Ph.D from UC-Berkeley."[1]

As the director of the Energy Department-funded Lawrence Berkeley National Laboratory, Chu helped broker the creation of the Energy Biosciences Institute, with $500 million in funding over ten years from BP. The institute includes the LBL, the University of Illinois and the University of California Berkeley. A LBL media release explained that "as part of its continuing drive to find longer term commercial alternatives to oil and gas, BP announced in 2006 that it would invest $500 million over the next ten years to establish the Institute, the first public-private institution of this scale in the world. The Institute’s emphasis on new fuels meshed with UC Berkeley’s and Berkeley Lab’s research aims to develop sustainable sources of energy and Illinois’ efforts to develop biofuel feedstocks. The three formed a strategic partnership to submit a proposal to BP, which was selected in February 2007 from among five international proposals."[8]

The project was Chu pitched BP's deal to the UC-Berkeley Academic Senate, one-third of whose members voted against it. Chu also promoted the institute on campus, saying "money" was the only reason more biofuels research wasn't already underway. The university's compromise agreement gave BP half of the seats on the board governing the institute. As Energy Secretary, Chu will likely "face pressure to partner with corporations in pursuing technological solutions to climate change," notes Harkinson in Mother Jones. "As the incoming Obama administration prepares to spend liberally to develop cleaner sources of energy, the structure of corporate-government partnerships will determine how the profits of that research return to taxpayers, and how rigorously scientists evaluate the downsides of controversial technologies such as biofuels."[9]

In an opinion column in the San Francisco Chronicle Chu and the chancellor of UC Berkley, Robert J. Birgeneau, defended the deal: "In these partnerships, universities must protect the academic integrity of faculty. The terms of the partnership must be based on fundamental principles that allow for open and timely dissemination of research results. Agreements must respect our primary commitment to the education of our students, and support our ability to make research results available for public benefit in a diligent and timely manner. The contract with BP for the EBI, which is being drafted for approval this summer, will meet these requirements. ... Faculty who mistrust industrial partnerships should not be allowed to block other faculty who want to partner with industry," they wrote.[10]

They proclaimed that it would "serve as a model for large-scale academic-industry partnerships that will play an increasingly important role in solving the major global problems of the 21st century."[10]

Steven Chu is a member of the:

Speeches, articles and interviews with Chu

Retrieved from "https://www.gem.wiki/w/index.php?title=Steven_Chu&oldid=237657"
Categories:
This page was last edited on 30 April 2021, at 11:06.
Content is available under Creative Commons Attribution-NonCommercial-ShareAlike unless otherwise noted.
Privacy policy
About Global Energy Monitor
Disclaimers