In July 2011, Manila Electric Co. (MERALCO), the Aboitiz Group, and Taiwan Cogeneration Corporation signed a memorandum of agreement to build a 600 MW, $1.28 billion coal plant in Subic Town, on the Redondo Peninsula in Subic Bay, in the province of Zambales. The plant would be built by the joint venture Redondo Peninsula Energy (RPE).[2] Environmental permits were issued for the project in December 2012.[3] MERALCO is the majority owner of the project, with a 52% share and the other owners owning an equal share of the remainder, or 24% each.[4]

In May 2013, the regional Court of Appeals of the Philippines — while also rejecting aspects of opponents' legal claims against the project — invalidated the Environmental Compliance Certificate issued by the EMB "due to various defects and non-compliance with legal procedures/requirements concerned," and ordered a halt to the construction of the plant.[5] The company continued with site preparation work, beginning in Q3 2013, but held off on further construction until the appeal was completed.[4]

In February 2015, the Philippines Supreme Court overruled the Court of Appeals and reinstated the project's Environmental Compliance Certificate. MERALCO's president, Oscar Reyes, said that the company hoped to award the engineering, procurement, and construction (EPC) contract and finalize the financial arrangements by mid-2015, at which time construction would begin. MERALCO hopes to complete construction by mid-2018.[6][7] As of May 2015, it was reported that the sponsor had chosen an Engineering, Procurement, and Construction (EPC) contractor and had "tapped" a consortium of local banks for financing.[8]

In March 2016, Meralco chairman Manuel V. Pangilinan said that the company would probably build the plant in two phases of 300 MW each, and that construction would begin in the first quarter of 2016.[9] That schedule has since been pushed back.

The plants Enginering, Procurement, and Construction (EPC) contract expired in January 2018 due to its failure to complete a purchasing agreement.[12] In March 2018 RP Energy canceled the order for two coal-fired generators from Doosan, citing delays.[13]

In January 2019 it was reported that because of delays the project may be converted from coal to gas.[14] In April 2019 AboitizPower announced that the project would be delayed for one year. With no progress in over two years the project appears to be shelved.[15]

In May 2019 the Supreme Court of the Philippines invalidated the plant's Power Supply Agreements (PSA's) because they had not gone through a competitive selection process (CSP), delaying development of the plant. In all seven plants owned by Meralco or contracting with Meralco had their PSA's invalidated by the ruling.[16]

In April of 2021, RP Energy announced that they were cancelling plans for construction of the Subic coal-fired plant, in a victory for the movement opposing the plant's construction since 2011. A spokesman for Aboitiz suggested that the company may construct a gas-powered plant at the Subic site instead.[17]

On October 27, 2020 the Philippine Department of Energy imposed a moratorium on the construction of new or "greenfield" power plants, meaning those which have yet to begin construction.[18] Meralco and Aboitiz subsequently confirmed that their planned greenfield coal plants were cancelled.[19] In November 2020 DOE Secretary Alfonso Cusi clarified that projects listed as "indicative" by the DOE would still be considered and might still be developed.[20]

On June 1, 2016, the Board of Investments issued a certificate of registration for the project. The certificate entitles RP Energy to import equipment, materials, and spares for the plant for five years free of duties and to receive an income tax holiday for the first four years of commercial operation.[21] 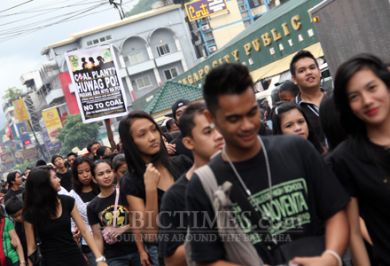 At the project's signing ceremony in July 2011, Alex Hermoso of the Olongapo-Zambales Civil Society Network gave protest letters and an anti-plant resolution of the Olangapo City Council to the company representatives, signaling public opposition and protest against the plant.[2]

While the plant's backers, AboitizPower and the Philippine Department of Energy, argue that the plant is necessary to supply power for growing local demand and ward off a "looming energy crisis," the Panalipdan-Southern Mindanao Network Opposed to Coal-Fired Power Plant argues that no such crisis exists, and that the plant's actual goal is to provide power for proposed mining operations of Xstrata and Sagittarius Mines, Inc. (SMI-Xstrata) in Davao.[22] 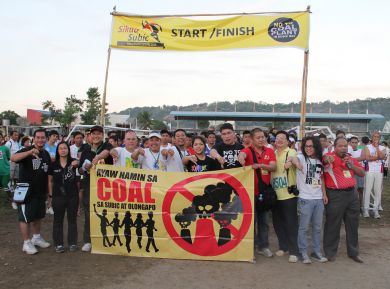 On Aug. 29, 2011, 3,000 local residents of Olongapo City (the largest city on Subic Bay) and of the province of Zambales participated in a protest against the proposed plant, organized by the Olongapo-Zambales Civil Society Network and the Sigaw ng Lumalabang Olongapeño (Siglo). Among the protesters were Olongapo Mayor James Gordon Jr. and members of the Olongapo City Council, Zambales First District Rep. Mitos Magsaysay, and Zambales Vice Governor Ramon Lacbain. Numerous communities from Subic Bay read resolutions opposing the plant, and pointed out that these local communities had not approved construction of the plant as required under Philippine environmental regulations.[23] In Dec. 2011, when the Subic Bay Metropolitan Authority held a "social acceptability forum" about the plant, RPE representatives, acting on advice from company lawyers, cancelled at the last minute.[24] During the following year, government officials from both Olongapo City and Zambales Province issued repeated resolutions opposing construction of the plant — largely on the grounds that it would impact tourism, which is vital for the local economy.[3]

In Nov. 2011, an official with the Subic Bay Metropolitan Authority confirmed that KEPCO Philippines Corp. had applied to build an additional coal plant in Subic Bay.[25]

In June 2012, following an appeal by the Subic Bay Metropolitan Authority to relocate the plant, Philippine Energy Secretary Jose Almendras refused, arguing that relocating the plant would push back the completion date and thus "jeopardize the power situation in Luzon."[26] This also followed a special report by the Manila Times, which found that "virtually every segment of the Subic, Olongapo City and Zambales province population — as well as the public officials and city, town and provincial councils — had registered, in writing and in marches and demonstrations, in city and provincial council resolutions, their strong opposition to the Aboitiz-Meralco-Taiwan RP Energy project."[27] 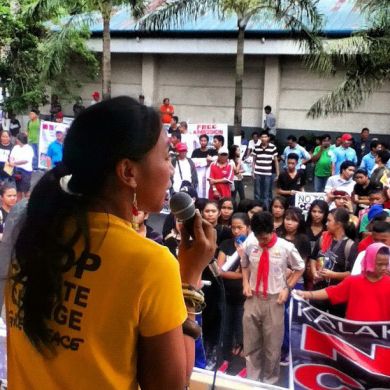 A Greenpeace activist speaks at a protest against the Subic Bay plant in Subic on July 27, 2012.

In Oct. 2012, when RPE held a scheduled public consultation as required by the permitting process, company representatives were not able to present a single slide of their presentation before angry residents barraged them with questions, forcing the Department of Environment and Natural Resources to reschedule the presentation.[28]

In December 2012, the Philippine Department of Environment & Natural Resources' Environmental Management Bureau (EMB) issued an amended Environmental Compliance Certificate to the project, despite ongoing public opposition. Many public leaders were highly critical of this move, with Zambales Vice Gov. Ramon Lacbain stating, "I wonder how the [EMB] issued the ECC despite the very strong opposition of local governments and civil society organizations to the establishment of this coal-fired plant within Subic Bay." Jen Velarmino, a spokesperson for the Subic Bay Freeport Chamber for Health and Environment Conservation, criticized the EMB for its provision for providing annual reports to the public on the plant's operations, stating that public input "should have been done first, and the basis of the ECC should have been the concurrence of stakeholders with this project."[3]

In May 2013, the regional Court of Appeals of the Philippines — while also rejecting aspects of opponents' legal claims against the project — invalidated the Environmental Compliance Certificate issued by the EMB "due to various defects and non-compliance with legal procedures/requirements concerned," and ordered a halt to the construction of the plant.[5] Opponents applauded the decision, and called on the Subic Bay Metropolitan Authority to "uphold and honor the results of the Social Acceptability Process which they themselves initiated" by increasing transparency regarding the permitting and construction process.[29]

In February 2015, the Philippines Supreme Court overturned the Court of Appeals' decision and reinstated the plant's environmental permits. The Kalikasan People’s Network for the Environment called the court's decision "appalling."[30]

In February 2018 the Court of Appeals Fourteenth Division denied a petition filed by Subic Bay Freeport Chamber for Health and Environment Conservation (SBFCHC) to stop construction of the plant.[31] SBFCHC alleged that the project will endanger human health and the environment, that its proximity to Subic Bay International Airport creates a safety hazard, and that indigenous people in the area have not been consulted about the project.[31]

Retrieved from "https://www.gem.wiki/w/index.php?title=Subic_power_station&oldid=247163"
Categories:
This page was last edited on 27 May 2021, at 23:20.
Content is available under Creative Commons Attribution-NonCommercial-ShareAlike unless otherwise noted.
Privacy policy
About Global Energy Monitor
Disclaimers