The Swanbank power station is located in Swanbank, South East Queensland, Australia. It is coal, natural gas, and landfill gas powered with a generation capacity of 865 MW. 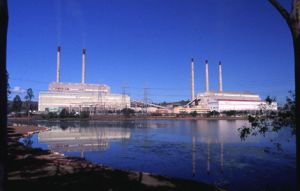 On July 11, 2008, four Greenpeace activists climbed the 462 foot high smokestack of the Swanbank B power station. While the smokestack climbers hung a 'Renewables Not Coal' banner, two other activists climbed onto the roof of the plant and unfurled a banner reading 'Energy [R]evolution'.[2] The four remained on the smokestack overnight in near freezing temperatures. On July 12, one of the protesters painted 'Go Solar' in huge lettering down the side of the smokestack. After 33 hours of occupation, all four climbers descended voluntarily. The goal of the action was to raise the level of debate in Queensland and the rest of Australia, re-emphasize the urgency of the climate change issue and the need to start shifting from coal to renewables.[3]

Wikipedia also has an article on Swanbank power station. This article may use content from the Wikipedia article under the terms of the GFDL.

Retrieved from "https://www.gem.wiki/w/index.php?title=Swanbank_power_station&oldid=237794"
Categories:
This page was last edited on 30 April 2021, at 11:06.
Content is available under Creative Commons Attribution-NonCommercial-ShareAlike unless otherwise noted.
Privacy policy
About Global Energy Monitor
Disclaimers