Tikhoretsk-Tuapse 2 Oil Pipeline is an operating oil pipeline in Russia.[1] 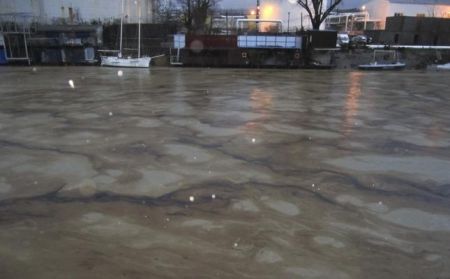 On 23 December 2014, the Tikhoretsk-Tuapse-2 pipeline spilled what Rosneft estimated as 8.4 cubic meters of oil at the 242 kilometer mark near Grechesky Village, Tuapse Region.[2] The spill was a result of a landslide, which damaged the pipeline wall. A portion of the spilled oil was emitted into the Tuapse River and oil slicks were detected in the Tuapse Bay. The spill reportedly covered 70,000 square meters,[3] with photos of the spill showing extensive coverage, suggesting initial company estimates regarding the amount spilled could be an underestimate.

Retrieved from "https://www.gem.wiki/w/index.php?title=Tikhoretsk-Tuapse_2_Oil_Pipeline&oldid=238189"
Category:
This page was last edited on 30 April 2021, at 11:06.
Content is available under Creative Commons Attribution-NonCommercial-ShareAlike unless otherwise noted.
Privacy policy
About Global Energy Monitor
Disclaimers