The undated satellite photo below shows the power station in Padubidri Industrial Area, Udupi district, Karnataka state, India. The location is north of State Highway 1, west of Padubidri. It is close to the Shambavi River, roughly 7 or 8 km from the coast where the imported coal for the power plant is transported to the plant through rail line.[1]

The power station was built by Lanco and owned by Udupi Power Corporation Ltd. (UPCL). It is based on imported coal. The configuration of the operating plant is as follows:[2]

According to the India Central Electricity Authority, the second unit of the plant was given an augmented capacity of 600 MW (original capacity was 507.5 MW) that was commissioned on April 16, 2011.[3]

No further permits were sought, as Lanco faced financial difficulties and protests against the expansion.

In July 2014 Lanco sold the power station to Adani Power. According to news sources, "the Udupi plant’s capacity is likely to be ramped up soon by another 1,320 MW, with fuel linkages being discussed."[6]

On August 13, 2015, Adani received a terms of reference for a units 3 and 4 of 800 MW each.[7] They would be supercritical and use imported coal.[8][9] In the EIA, released December 2016, Adani said it is debating between super and ultra-supercritical technology for the plant.[10]

Environmental clearance was granted for two 800 MW supercritical units on August 1, 2017.[11] In June 2018 Adani signed a concession agreement with New Mangalore Port Trust for an additional 4.99 hectares of land for the expansion project.[12]

In March 2019, the principal bench of the National Green Tribunal (NGT) at New Delhi declared “illegal” all clearances granted to proposed expansion of the plant. The NGT noted that the “genuinely serious” issues raised by the villagers and petitioner had not been given due attention by the concerned authorities including the government, and said environmental clearance had been granted without following due process prescribed by the law.[13]

The Terms of Reference and NGT had, in part, directed the state government to conduct a carrying capacity study (14-March-2019 and 14-October-2019 Orders).[13]

An Interim Report on environmental carrying capacity of Udupi taluk was conducted by the Environmental Management & Policy Research Institute (EMPRI) and reportedly released in early 2021.[16]

The Final Assessment Report was released in December 2021, and concluded the following (in part):[17]

"Expansion of the capacity of the power plant is likely to have adverse implications from air pollution including dust, marine ecology, and groundwater and soil contamination from heavy metals. Inadequate/non-functional environmental management practices/facilities followed/established by UPCL need corrective actions before expansion plan is considered. It is felt that additional studies, for example on the effect of coal dust on agricultural crops; dust fall and its impacts; implications of the violation of CRZ notification rules for marine biodiversity; and, impacts of air pollution and water contamination on the health of villagers; would be useful for better socio-ecological and economic outcomes."

On May 31, 2022, the National Green Tribunal imposed a hefty penalty of over Rs 52 crore (US $6.7 million) on the plant for violating environmental rules. Based upon its finding that the Adani Group’s environmental management of Udupi has been inadequate, the tribunal has directed India’s Union Ministry of Environment, Forests & Climate Change (MoEF&CC) to conduct a more stringent impact assessment before approving the project’s expansion. The tribunal has directed the MoEF&CC to take the Carrying Capacity Study into account while considering the application for approval of the project’s expansion by issuing additional terms of reference for the environmental impact assessment study. It said the terms of reference should include an assessment of the proposed expansion’s impacts on socio-economic conditions, taking into account past violations and pollution of agricultural land. It called for the precautionary principle to be applied by those bodies considering the approval.[18]

The Udupi power station has a captive jetty of 4 million tonnes per annum, and an external coal handling system located at the New Mangalore Port in Mangalore, Karanataka.[19] 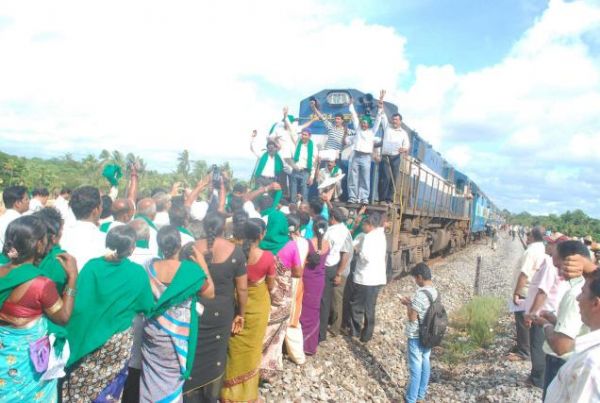 On June 1, 2011, activists with the Karnataka Rajya Raitha Sangha (KRRS) blocked the Mangalore-Mumbai Matsyagandha Express train for 10 minutes in Nandikoor, Karnataka. The purpose of the protest was to show opposition to the transportation of coal by railway from the New Mangalore Port to the Udupi station. According to the activists, a condition for the environmental clearance granted to the plant was that coal would be transported through a closed conveyer system. Transportation in open railroad cars was producing damage to crops, agricultural land, drinking water, and public health, according to the activists.[20] Local resident Sundari Shetti complained, “The house is always coated with a thick layer of ash. I have difficulty in breathing and the constant drone of Lorries transporting fly ash way into the midnight has affected my health.” Village panchayat president Sunil Raj Shetty said that no permission had been sought from the local administration before giving the ash pond the green signal. He said, “It used to be a fresh water lake - the Daddikere Lake.”[21]

Project details for expansion (Units 3 and 4)

Retrieved from "https://www.gem.wiki/w/index.php?title=Udupi_power_station&oldid=352394"
Categories:
This page was last edited on 27 July 2022, at 02:03.
Content is available under Creative Commons Attribution-NonCommercial-ShareAlike unless otherwise noted.
Privacy policy
About Global Energy Monitor
Disclaimers