Underground coal gasification (UCG) is a gasification process used to produce gas from coal in situ by injecting air or oxygen into non-mined coal seams and extracting the product gas via surface wells. The resulting synthetic gas (“syngas”) can be used to produce electricity, as well as chemicals, liquid fuels, hydrogen and synthetic natural gas.[1]

A borehole is drilled down to the coal seam, which is then ignited. Oxygen is injected to feed the combustion and drive the gasification reactions that produce a gas mixture made chiefly of hydrogen (H2), carbon monoxide (CO), carbon dioxide (CO2), and some amount of methane (CH4). These gases are then forced out a second borehole to be harnessed at the surface. The gasification of coal in this manner creates an empty cavity below ground, the size of which depends on the rate of water influx from the water table, the heat content of the coal, the location and shape of the injection and production wells, and the thickness of the coal seam. [2]

There are two different commercially available UCG methods. One method uses vertical wells and reverse combustion to open up internal pathways in the coal. This process was used in the Soviet Union and later tested in Chinchilla, Australia. The second method was largely developed in the U.S. and creates dedicated inseam boreholes, using drilling and completion technology adapted from oil and gas production. It has a moveable injection point known as CRIP (controlled retraction injection point) and generally uses oxygen or enriched air for gasification.

Underground coal gasification presents certain environmental advantages over conventional coal mining. By not requiring mining, UCG avoids issues such as acid mine runoff, mine safety, overuse of groundwater, and land reclamation. During gasification, approximately half of the sulfur, mercury, arsenic, tar, and particulates from the used coal remain below ground. UGC syngas also has a higher hydrogen concentration than surface produced syngas, giving it a potential cost advantage when producing electricity.[3] However, UCG also presents its own engineering and environmental challenges such surface caving (subsidence) and groundwater contamination.

The history of UCG is traced back to 1868, when Sir William Siemens published the first paper proposing underground coal gasification. Russian chemist Dmitri Mendeleyev further developed Siemens' idea over the next couple of decades. In 1912 in Durham, the United Kingdom, Nobel Prize winner Sir William Ramsay led the first experimental work on UCG. He was unable to complete the UCG plant before the beginning of the World War I and all efforts in UCG development in Western Europe were discontinued until the end of the World War II.

Soviet scientists pioneered the large-scale application of UCG under Lenin and Stalin, who both supported the technology as a way to eliminate hard mining labor. [4] A national research and development program began in 1928 and by the 1950s, the USSR had achieved commercial scale production of syngas. The UCG site at Angren, Uzbekistan was the most effective of these projects, and continues to produce up to 18 billion cubic feet of syngas per year for the Angren power station. [5]

Between 1974 and 1989 research and development of UCG increased in the United States, with 33 UCG pilot projects located in Wyoming, Texas, Alabama, West Virginia and Washington. The most successful of these was the Rocky Mountain 1 project, conducted in the 1980s in Carbon County, Wyoming and organized by the U.S. DOE, the Electric Power Research Institute (ERPI), the Gas Research Institute (GRI), Amoco Production Company, and Union Pacific Resources. Support for the project effectively ended in 1986 due to the drop in oil prices. [6]

During the 1990s, in northeastern Spain, a short term UCG trial was held at the “El Tremedal” site. This project successfully demonstrated the feasibility of gasification at depths greater than 500m. [7]

In recent times, UCG projects have been concentrated in China, Australia and South Africa, which all have operating power or chemical plants fed by UCG syngas, and in Canada and the U.S. where projects are in the planning stages. China has conducted 16 UCG pilot projects since 1991, making it the largest UCG program in the world. Currently, the Xin Wen coal mining group in Shandong Province has six UCG reactors producing syngas for cooking and heating, and a project in the Shanxi Providence uses the gas for ammonia and hydrogen production. Outside of the former Soviet Union, the largest project has been the Australian Chincilla site in Queensland. It operated from 1997 to 2003 and gasified approximately 30,000 tons of brown coal. [8]

There are no operating UCG facilities in the U.S. at present, and no major companies have committed to UCG research, however a number of other research projects are underway. Lawrence Livermore National Laboratory (LLNL) and the National Energy Technology Laboratory (NETL), both DOE labs, have recently revived their programs. In the U.S., Purdue University in Indiana is the only university researching UCG, however universities in China, India, Australia, Brazil, Canada, and the United Kingdom are all engaged in serious development of UCG technology. [9]

Waste2Tricity has announced a joint venture with Thornton New Energy Ltd for ultra low carbon emission electricity from coal using UCG combined with low cost fuel cells from AFC Energy PLC: "In a bid to bring to market an ultra low carbon emission technology to convert coal into electricity, Thornton New Energy Ltd and Waste2Tricity Ltd have signed a memorandum of understanding. Also allowing for the capture of carbon dioxide as part of the process, the proposed joint venture is the UK’s first commercial application to generate clean electricity from coal, combining new generation AFC Energy fuel cells with UCG and other proven technologies. The gasification of coal underground generates a fuel with a low emissions profile and the potential for complete carbon capture and storage (CCS) at low energy and financial costs."

"Thornton New Energy, a subsidiary of BCG Energy Ltd, was in January 2009 awarded the first UK licence to carry out UCG and develop deep, previously un-mineable coal reserves under the Firth of Forth, Scotland. Waste2Tricity has exclusive rights for the application of AFC Energy fuel cells with any gasification technology within the UK, including energy from waste."

In 2009, researchers from Purdue University and the Indiana Geological Survey issued a report pinpointing sites in five southwestern Indiana counties for UCG operations for electricity generation, production of chemicals, and plastics and fuels for cars, trucks, and aircraft. There were seven primary criteria for the sites, including two major requirements: the coal deposit should be at least 1 meter and preferably 2 meters thick, and it should be located at least 60 meters underground. The Indiana sites are located in the southwestern portion of the state in two large coal deposits, the Springfield and Seelyville coal beds. The report recommends more detailed geological, chemical and engineering studies that identify the optimal Indiana sites, and also recommends that state officials initiate discussions for developing a pilot plant by establishing "cooperative agreements" with organizations and companies having expertise in the process, including Lawrence Livermore National Laboratory, Ergo Exergy Technologies Inc., and Linc Energy.[10]

Also in 2009, a pilot UCG plant is planned in Wyoming with Australia-based Linc Energy Ltd. The company aims to produce a minimum of 40,000 barrels per day of diesel and jet fuel from its initial commercial operations.[10]

In June 2010, New Zealand's biggest coal seam gas explorer, L & M Energy (LME), applied for prospecting rights to over 2000 square kilometres of the Waikato, thought to contain over 2 billion tonnes of coal, with plans to burn coal underground to produce gas that can by piped to Auckland. LME said the Waikato had a large resource of available coal, and gas pipelines already pass through the permit area to supply Auckland consumers. It has asked for permits bracketing the Huntly coal mines, which produce coal for supply to power generation and New Zealand Steel. A pioneer UCG project was undertaken in 1994 in the Huntly coal reserve, when about 80 tonnes of coal were gasified. LME said that coal thickness of up to 15m had been documented by mining and exploration, with more than 250 holes having been drilled in various programmes, including its own eight wells for the extraction of coal seam gas.[11]

LME was formed earlier in 2010 from a merger of L&M Energy -- formerly L&M Petroleum -- with L&M Coal Seam Gas, then owned by high-profile Australian miner Geoff Loudon and his Swiss (Werner Muller) and Hong Kong (Kwok Wai Chiu) partners through Weaver Holdings, which also owned 43 percent of L&M Petroleum. The three big shareholders own nearly 84 percent of the company. During the merger it was estimated that LME would spend almost all of its remaining cash reserves this year, doubling the cost of its capital programme from $3.1m to almost $6m, and would have to raise fresh capital.[11]

It was announced in October 2011 that Australian company Linc Energy was going to pursue a permit to develop a syngas pilot project in the Powder River Basin of Wyoming in the United States. The process, the company said, would produce natural gas.[12]

Underground coal gasification allows access to more coal resources than economically recoverable by traditional technologies. By some estimates it will increase economically recoverable reserves by 600 billion tonnes.[13] The Lawrence Livermore National Laboratory estimates that using UCG could increase recoverable coal reserves in the USA by 300%. According to Linc Energy, the capital and operating costs of the underground coal gasification are lower than in traditional mining.[14]

Additional cost savings can be made over traditional coal mining because UCG syngas can be piped directly to the end-user, reducing need for rail and road infrastructure. 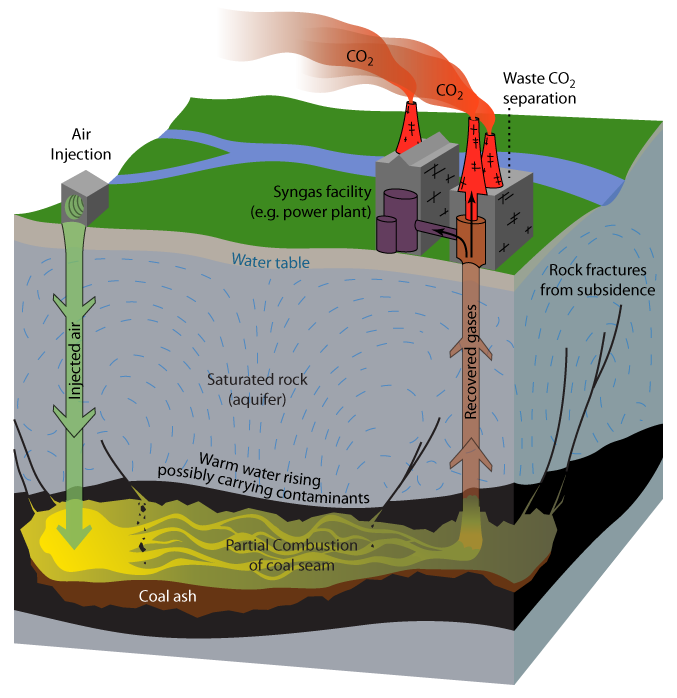 By eliminating the need for mining, UCG offers some benefits to the environment over traditional coal mining and coal gasification methods. Immediate benefits include the elimination of solid waste discharge and reduction in sulphur dioxide (SO2) and nitrogen oxide (NOx). In traditional coal mining, large quantities of coal ash, oxides, waste rock and radioactive waste are common discharges. In the case of UCG, this waste is either avoided or contained underground. Due to the absence of coal mining, Appalachian mountaintops are not stripped bare and remain largely preserved, hence there is no need for tailing and ash dams. For comparison, the ash content of UCG syngas is estimated to be approximately 10 mg/m³ compared to smoke from burning where ash content may be up to 70 mg/m³.

Environmental concerns about UCG center on the contamination of groundwater systems and the potential for subsidence. Organic and often toxic materials (such as phenol) remain in the underground chamber after gasification and therefore are likely to leech into the ground water, should inappropriate site selection occur. Phenol leechate is regarded as the most significant environmental hazard due to its high water solubility and high reactiveness to gasification. The extraction of coal through UCG creates subsurface cavities that have the potential for collapse and surface deformation.

Wikipedia also has an article on Underground coal gasification. This article may use content from the Wikipedia article under the terms of the GFDL.

Retrieved from "https://www.gem.wiki/w/index.php?title=Underground_coal_gasification&oldid=238511"
Categories:
This page was last edited on 30 April 2021, at 11:07.
Content is available under Creative Commons Attribution-NonCommercial-ShareAlike unless otherwise noted.
Privacy policy
About Global Energy Monitor
Disclaimers