The undated satellite photo below shows the plant, which is near Puchuncaví in Chile's Valparaíso region.

The four-unit Ventanas project dates back to 1964, when the first 120 MW unit (Ventanas 1) was installed. This was followed by 220 MW Ventanas 2 in 1977. Ventanas 3 (also known as Nueva Ventanas) and Ventanas 4 (known as Campiche) were added in 2010 and 2013, respectively, making the Ventanas complex one of the largest in Chile. All four units are fueled by subbituminous coal imported via the attached coal port.[1][2]

On December 29, 2020, Ventanas Unit 1 was shut down after 56 years in operation. Despite its retirement, Unit 1 retains 'strategic reserve' status, meaning that it can still theoretically be reactivated to provide backup power supply under exceptional circumstances that put the security and sufficiency of Chile's electrical grid at risk.[7]

According to Chile's national decarbonization plan, Nueva Ventanas (Unit 3) and Campiche power station (Unit 4) were to cease operations no later than 2040, though the specific decommissioning dates were yet to be determined. AES Gener agreed to consult with the government every five years to renew details of the plan for Units 3 and 4, taking into account system stability requirements, energy costs, and environmental goals.[9]

In July 2021, AES Andes announced that it would officially retire Ventanas Units 3 and 4 (Nueva Ventanas and Campiche) as early as January 2025, provided that Chile's grid requirements could be met by other sources of electricity.[11]

The latest addition to AES Gener's Ventanas coal-fired complex, Unit 4 (Campiche) was originally scheduled for completion in May 2011. However, in June 2009, Chile's Supreme Court ordered that construction be halted, citing improper zoning of the plant. AES Gener had already completed 40% of the $500 million project before it was halted. Subsequent regulatory changes allowed construction of the plant to resume, but the project was again suspended in early 2010 as Puchuncaví municipality took legal steps against the plant due to environmental concerns. In July, 2010, AES Gener reached an agreement with Puchuncaví to renew construction of Campiche, promising in return to invest nearly US$80 million in environmental improvements of the company's local thermal power plants, in public projects and forestation.[12][13] The plant was brought online in March 2013.[14]

In late December 2013, several tons of sardines washed up dead on Ventanas beach near the plant, spurring renewed controversy over Campiche's environmental impact and prompting calls for suspension of operations.[15][16][17]

In April 2018 a lawsuit was filed against AES Gener by a group of 259 fisherman, demanding damages as a result of AES Gener dumping coal in the bay of Ventanas.[18] 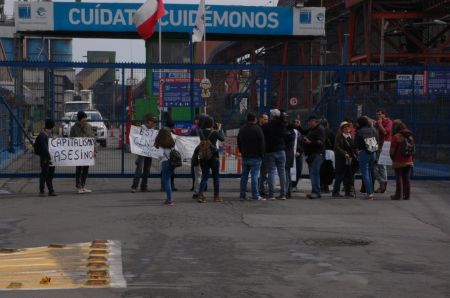 In April 2019 a protest was staged in Ventanas against industrial pollution, including a plan by AES Gener to use additional desalinated sea water at the Ventanas power station.[19]

In April 2021, the environmental group Chao Carbón publicly criticized AES Gener for not committing to a precise shutdown date for all of its Chilean coal operations, noting that AES Gener is only one of two companies (along with Colbún) that has failed to do so.[20]

In March 2013, a financing agreement with Credit Agricole Group and BNP Paribas Fortis was closed; however, the amount of the financing was not disclosed.[21]

Retrieved from "https://www.gem.wiki/w/index.php?title=Ventanas_power_station&oldid=263203"
Categories:
This page was last edited on 16 September 2021, at 22:42.
Content is available under Creative Commons Attribution-NonCommercial-ShareAlike unless otherwise noted.
Privacy policy
About Global Energy Monitor
Disclaimers