Vũng Áng power station is a 4,920-megawatt (MW) coal plant complex under development in Hà Tĩnh province, Vietnam. 1,200 MW are currently operating, 1,200 MW are being developed, and a further 2,400 MW have been proposed.

The map below shows the location where the plant is being built, in Kỳ Lợi commune, Kỳ Anh district, Hà Tĩnh province.

Unit 1 subsequently had problems with its turbine. A new rotor was installed in 2016.[6]

In 2007, the Vung Ang II Thermal Power Joint Stock Company (VAPCO) was established to build and operate the power plant, a joint venture between OneEnergy Ltd and the Hanoi based Refrigeration Electrical Engineering Co. (REE). OneEnergy Lts is a 50:50 venture between the Hong Kong based CLP and the Tokyo based Mitsubishi Corp. The plant was reported to be 2 x 600 MW, with an estimated capital cost of US$1.2 billion.[1] The Vietnamese government approved the plant in March 2009.[7] Although one source reported the plant to be 2 x 660 MW in capacity,[8] other sources, including the most recent and detailed, have listed the capacity as 2 x 600 MW.[9]The plant's owners expected to begin construction in March 2015; however, this didn't happen.[10]

In September 2017, Mitsubishi Vice President Yoshinori Katayama met with Deputy Prime Minister Trịnh Đình Dũng to discuss the project. The meeting did not produce any news about when construction might begin.[13]

In June 2018 it was reported Hong Kong's One Energy would be sole owner of the plant, pending approval from the Vietnam government.[14]

In July 2018, the Ministry of Planning and Investment decided not to issue an investment certificate to the plant, citing the need for the sponsors to address issues around the EIA, land allocation, and funding.[15]

In March 2019 OneEnergy announced that the plant would use ultra-supercritical rather than supercritical technology.[16]

In September 2019 it was reported that talks with potential lenders for the project had been restarted, including DBS Bank, Mizuho Bank (financial adviser), MUFG, OCBC, SMBC, Standard Chartered Bank and Sumitomo Trust.[18] However, in October 2019, it was revealed that OCBC had withdrawn from the project.[19] In October 2019 more then 30 non-governmental organizations (NGO's) sent a letter to the Japan Bank for International Cooperation (JBIC) demanding that the bank withdraw from financing Vũng Áng-2.[20]

In December 2019 CLP announced that it would no longer invest in new coal-fired power plants.[21] Whether Vũng Áng-2 and another CLP project Vĩnh Tân-3 will reach completion without CLP’s involvement will depend on the projects’ other sponsors, according to Julien Vincent, Executive Director of the NGO Market Forces. These other sponsors include Japanese bank Mitsubishi UFJ Financial Group (MUFG) and Singapore-headquartered DBS Bank.[22] Mitsubishi has categorized Vũng Áng-2 as "under development" and stated that its ban on funding new plants does not therefore apply.[23]

In February 2020 the National Steering Committee on power development stated that Unit 1 was scheduled to be commissioned in Q1 2024 and Unit 2 in Q2 2025.[24] On February 25, Japan Bank for International Cooperation posted the EIA (in Vietnamese) for Vũng Áng-2 on its website.[25]

In March 2020, a report by the Non Coal, Go Green! Project summarized the financial backing for Vũng Áng-2 as follows:[26]

The investor mix in this company has changed numerous times, but currently it is 100% owned by OneEnergy Ltd.. The company OneEnergy was previously a 50:50 joint venture between CLP Holdings (headquartered in Hong Kong) and Mitsubishi Corp.’s 100% subsidiary Diamond Generating Asia (DGA). However, in 2019, CLP declared a withdrawal from new coal-fired power projects. As of February 2020, the partners are Mitsubishi Corp. (40%) and Japan’s Chugoku Electric Power Co. (20%), along with Korea Electric Power Corporation (KEPCO) considering acquiring the remaining 40% that was held by CLP.

In April 2020, following JBIC head Tadashi Maeda's comments to Japanese business magazine Diamond Online that the institution "will no longer accept loan applications for coal-fired power generation projects," pressure mounted on JBIC to enshrine this statement in a formal policy and for it to reject the funding application for Vũng Áng-2 which it has been considering for more than a decade.[27] In June 2020 it was reported that KEPCO was seeking an ownership stake in Vung Ang-2.[28] In July 2020, South Korean lawmakers proposed four bills in the National Assembly that would prohibit government-backed institutions from funding coal projects. Affected firms would include Kepco, Korea Eximbank, Korea Development Bank and Korea Trade Insurance Corporation. It is unclear when voting on the bills will take place in the South Korean parliament. However, as Vung Ang 2 has yet to be approved, if the new legislation is approved before Kepco can finalise the deal then it will need to back away from Vung Ang 2.[29] 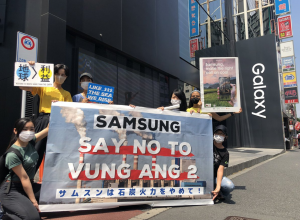 Activists outside Samsung's Galaxy store in Tokyo calling on the company not to get involved in the Vung Ang 2 coal power project. Source: www.wrongcalloncoal.com

Following news in early August 2020 that the construction arm of the South Korean electronics company Samsung was considering participation in the construction of Vung Ang 2, a campaign was established by international environmental groups including Greenpeace, Solutions for Our Climate and Market Forces warning that the company's group-level sustainability pledges and its brand image would be compromised if it chooses to proceed with involvement in the controversial coal plant. In July, Samsung Securities, the group's financial arm, pulled out of potential involvement in Adani's controversial Abbot Point Coal Terminal project in Australia following a consumer boycott campaign.[30] The new international campaign calling on Samsung not to participate in the Vung Ang 2 project has set up a dedicated campaign website: www.wrongcalloncoal.com

An independent evaluation[33] of the 2018 EIA for Vũng Áng-2 published in April 2020 by Environmental Law Alliance Worldwide (ELAW) was critical of the document on a range of issues:

In October 2020, the board of KEPCO decided to invest US$189 million for the acquisition of a 40% stake in the proposed project alongside Mitsubishi’s Diamond Generating Asia and Chugoku Electric Power which have 40% and 20% stakes respectively. KEPCO's participation is subject to official approval from the Vietnamese government and would see Samsung C&T and Doosan Heavy Industries joining the project as the engineering, procurement and construction contractors.[34] [35] KEPCO's decision was criticised by Joojin Kim, managing director of Korean campaign group Solutions for Our Climate, who commented: "South Korean President Moon Jae-in and the ruling party are pursuing a Green New Deal initiative at home but are investing in coal power plants abroad. Above all, KEPCO is expected to suffer a loss of $84 million if it pushes forward the Vung Ang 2 project according to a pre-feasibility study conducted by Korea Development Institute."[36]

In December 2020 the Japan Bank for International Cooperation (JBIC) signed a loan agreement to provide project financing amounting to up to approximately US$636 million for the project.[37] The Export-Import Bank of Korea (KEXIM) also participated in the finance package along with the Japanese private sector financiers Mitsubishi UFJ Financial Group, Mizuho, Sumitomo Mitsui Banking Corporation and Sumitomo Mitsui Trust Holdings. The total debt financing provided for the project was US$1.767 billion.[38]

In March 2021, the governor of JBIC, Maeda Tadashi, announced that the state-owned financial institution would no longer provide funding for coal plant projects overseas. Tadashi indicated that the financing for Vũng Áng-2 would be the final overseas thermal coal project to receive public and private funding from Japanese sources.[39]

In October 2014, Samsung Construction & Trading Corporation, a subsidiary of the Samsung Group, signed a memorandum of understanding with the Vietnamese government to build the two-unit, 1,200-MW, $2.5 billion Vũng Áng-3. Construction is scheduled to begin in early 2018, and the two units are scheduled to be brought online in January and July of 2022. Samsung would finance the project using internal funds.[40][41]

In October 2017, Samsung's Chairman and CEO Shin Jong-kyun met with Prime Minister Nguyễn Xuân Phúc to discuss the country's investments in Vietnam. Samsung is the largest foreign investor in Vietnam, with 136,700 workers investments that include aviation, ship building, and telecommunications.[43]

In July 2018 the government announced that Vũng Áng-3 may be cancelled due to local opposition.[44] In June 2019 the completion date for Vũng Áng-3 Units 1-2 was listed as "after 2030" in a report by the the Ministry Of Industry And Trade (MOIT) on the implementation of the revised seventh Power Development Plan (PDP7).[45] Units 3-4 do not appear in the MOIT report and appear to be cancelled.

In November 2020 the Ha Tinh Provincial People's Committee asked the MOIT to convert Vũng Áng-3 to gas.[46] Later in November 2020 it was reported that Samsung had requested and been approved for a refund of its investment in the project by the Prime Minister, and that Vũng Áng-3 and other coal plants whose construction had not yet begun would be cancelled under Vietnam's upcoming Power Development Plan VIII.[47][48] In June 2021 the Ha Tinh People’s Committee submitted a proposal to the Ministry of Industry and Trade to switch Vũng Áng-3 from coal to gas, and increase its capacty from 2.4 GW to 4.8 GW.[49]

In February 2017, local residents blocked the road leading to Vũng Áng-1, saying that coal trucks moving along the road were causing pollution. The local government said it would write to Vinacomin, calling for suspension of coal trucks.[52] The following month, PetroVietnam issued a press release telling us how great its pollution and waste management procedures are.[53]

In February 2021, environmental activist Greta Thunberg came out in support of the No Coal for Our Future campaign, which is working to prevent construction of the Vung Ang-2 power station.[54]

Retrieved from "https://www.gem.wiki/w/index.php?title=Vung_Ang_power_station&oldid=278118"
Categories:
This page was last edited on 3 December 2021, at 20:17.
Content is available under Creative Commons Attribution-NonCommercial-ShareAlike unless otherwise noted.
Privacy policy
About Global Energy Monitor
Disclaimers