The West-East Gas Pipeline is a proposed natural gas pipeline.[1]

The pipeline would run from northwest Western Australia to the Moomba gas hub in Moomba, South Australia. One of multiple proposed routes is shown below.[2]

The West-East Gas Pipeline was first proposed in the 1970s by Federal Energy Minister R.F.X. Connor, who opposed exporting North West Shelf gas as LNG and wanted to supply it to Australia’s domestic market.[1] In Western Australia, environmental groups have raised concerns that a December 2017 decision to cancel an agreement for two gas projects was made as part of a plan to instead build the West-East Gas Pipeline.[5] 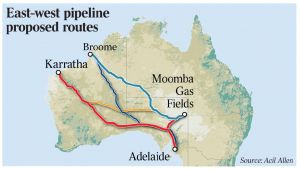 ACIL-Allen, working in partnership with engineering firm GHD, was contracted in late 2017 by the federal government to carry out a pre-feasibility study on the West-East Gas Pipeline. The study is due to be completed by March. This is the first time a pre-feasibility study will be carried out for the potential pipeline, confirming the concerns of local environmental groups. Despite this development, the future remains in doubt as other gas supply plans challenge its construction.[6] Completed in March 2018, the ACIL-Allen report recommended a 2900-kilometer route from Karratha to Moomba.[3] The report found that the project was not feasible unless it was "supplied by cheap gas that WA consumers are barred from buying."[3] Acting Federal Energy Minister Matt Canavan responded that the study showed that the West-East Pipeline was not the "most economical model" for increasing gas supplies to southeast Australia.[3]

In June 2020, Jemena proposed the Port Kembla to EGP Gas Pipeline as a shorter, cheaper way to deliver gas to eastern Australia.[7] Despite a lack of progress on the West-East Gas Pipeline since 2018, it was included in a May 2020 report on projects the government hoped could stimulate the economy after the crash caused by the COVID-19 pandemic.[8]

In August 2020, the government of Western Australia imposed a ban on exporting natural gas to eastern Australia, and advocates of the West-East Gas Pipeline said this would effectively cancel the project.[9]

Retrieved from "https://www.gem.wiki/w/index.php?title=West-East_Gas_Pipeline&oldid=357921"
Categories:
This page was last edited on 13 September 2022, at 14:54.
Content is available under Creative Commons Attribution-NonCommercial-ShareAlike unless otherwise noted.
Privacy policy
About Global Energy Monitor
Disclaimers