AMIGO LNG Terminal is an LNG export terminal under development in the Sonora region of Mexico.[1]

This LNG export terminal is to be located at the Port of Guaymas in Mexico's Sonora state.[2][3] 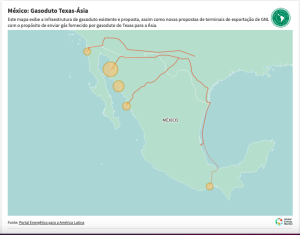 The AMIGO (American Mexican Integrated Gas Operations) terminal is an LNG export terminal currently under development on Mexico's Pacific coast; the terminal is to be located in Guaymas, Sonora state, on the Gulf of California.[2][3] Plans call for the terminal, with a proposed capacity of between 7 mtpa[1][3] and 7.8 mtpa (metric tonnes per annum)[2], to import natural gas from the United States' Permian shale basin through existing pipeline networks - including the Samalayuca-Sásabe gas pipeline and the Sásabe-Guaymas gas pipeline - and liquefy it for export to markets in Asia.[2]

The terminal project is being developed by AMIGO LNG, S.A., an affiliate of Epcilon LNG LLC.[2] In March 2020, Epcicon requested permission from the United States DOE (Department of Energy), Office of Fossil Energy, to export up to 395 billion cubic feet (Bcf) per year of American natural gas into Mexico, with a portion of that gas to be liquefied in Mexico for re-export to Asia.[5] Epcilon's request was officially approved by the DOE in December 2020.[2]

As of August 2022, project owner LNG Alliance Ltd expected to make a final investment decision on the AMIGO terminal by February 2023, having already procured commitments of Permian Basin gas for the project starting in 2025. The company was reportedly negotiating purchase agreements with customers in India and seeking a 25-year contract to obtain gas for the terminal from the adjacent Sásabe-Guaymas Gas Pipeline.[7]

Retrieved from "https://www.gem.wiki/w/index.php?title=AMIGO_LNG_Terminal&oldid=387109"
Categories:
This page was last edited on 2 February 2023, at 16:13.
Content is available under Creative Commons Attribution-NonCommercial-ShareAlike unless otherwise noted.
Privacy policy
About Global Energy Monitor
Disclaimers