The Guaymas-El Oro Pipeline is an operating natural gas pipeline running between Sonora and Sinaloa states, Mexico. Together with the adjoining Sásabe-Guaymas Gas Pipeline, it is also known as the Sonora pipeline or Gasoducto Sonora, Phase II.[1][2]

In October 2012, the Mexican division of Sempra International signed a 25-year contract with Mexico's Comisión Federal de Electricidad to build, own, and operate the Guaymas-El Oro project.[7] The pipeline interconnects with the El Oro-Mazatlan Pipeline[8] and is a key component of Mexico's north-northwest natural gas delivery network.[9] Construction was completed in May 2017[4][10], and the pipeline operated commercially for three months before service was disrupted in August 2017.[11]

Disruption of the Guaymas-El Oro pipeline has forced Mexico to rely more heavily on the El Encino-Topolobampo Gas Pipeline to supply natural gas to Sinaloa and other northwestern states.[12]

Suspension of service and legal disputes

The pipeline was shut down in August 2017 following an act of sabotage by indigenous Yaqui groups who oppose its operation, and as of early 2022 it remained offline pending reconstruction of a missing 10-kilometer segment.[5][11]

In 2015, the Yaqui tribe, with the exception of some members living in the Bácum community, approved a right-of-way easement agreement for the construction of the Guaymas-El Oro segment of the Sonora natural gas pipeline that crosses its territory. Representatives of the Bácum community filed a legal challenge in Mexican federal court demanding the right to withhold consent for the project and calling for stoppage of work within Yaqui territory. In 2016, the judge granted a suspension order that prohibited pipeline construction within the Bácum community territory. In 2017, an appellate court ruled that the scope of the 2016 suspension order encompassed the wider Yaqui territory, which has prevented Sempra Infrastructure from making repairs to put the pipeline back in service.[11]

In July 2019, a federal district court ruled in favor of Sempra Infrastructure and held that the Yaqui tribe was properly consulted and that consent from the Yaqui tribe was properly received. Representatives of the Bácum community appealed this decision, causing the suspension order preventing repair work within Yaqui territory to remain in place until the appeals process is exhausted. In December 2021, the court of appeals referred the matter to Mexico’s Supreme Court.[11]

In response to the suspension of service, Sempra Infrastructure has sought force majeure payments from Mexico's CFE (Federal Electricity Commission) and the two parties have been forced to repeatedly renegotiate terms of their contract to extend the pipeline's service start date.[11] CFE has agreed to resume payments only when the damaged section of the Guaymas-El Oro segment of the Sonora pipeline is repaired.[11] Sempra Infrastructure continues to consider its right to terminate the contract and seek to recover costs and lost profits.[11] In January 2022, Sempra and the CFE announced a non-binding MOU (memorandum of understanding that seeks to advance discussions regarding the pipeline's potential re-routing and resumption of service based on mutual understanding between the Yaqui community and CFE.[13] Sempra Infrastructure has signaled its intention to enter into a definitive agreement with respect to the pipeline in the first quarter of 2022.[11]

In January 2022, Sempra Infrastructure and CFE signed a non-binding memorandum of understanding (MOU) for the resumption of operations of the Guaymas El Oro pipeline in addition to the development of the Vista Pacificio LNG plant and the Vista Pacifico LNG Terminal.[6]

The pipeline, operated by IEnova (Infraestructura Energética Nova SAB de CV), is 330 km (205 mi) long and 30 inches in diameter, with a capacity of 510 million cubic feet per day[3][4], or 5.3 billion cubic meters of natural gas per year.

The Guaymas-El Oro project has generated opposition from an indigenous Yaqui group in Loma de Bácum, Sonora state, whose members say they never agreed to construction of a nine-mile section of pipeline that crosses their land. In an August 2017 protest, members of the community used a backhoe to remove a 25-foot section of the pipeline, disrupting operations and perpetuating an ongoing legal battle with IEnova.[14][15][16] As of March 2018, the pipeline's status remained in limbo pending a decision by a Mexican federal district court.[10] 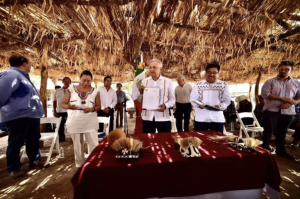 President AMLO announced the creation of a justice commission for the restitution of land to the Yaqui people, June 2021 Source: Mongabay

In 2019, Mexico's federal electricity commission CFE agreed to work with IEnova to reopen the blocked section of pipeline[17][18][19], and in September 2019 the government announced that it was negotiating an agreement with the Yaqui community to reroute the pipeline south to steer clear of Loma de Bácum and other Yaqui-owned lands.[5] In an August 2020 meeting with Yaqui leaders, Mexican president Andrés Manuel López Obrador confirmed the government's support for rerouting the pipeline as a means of resolving the conflict.[20]

In September 2021, the CFE officially announced it would build a section of the pipeline between 70-90 kilometers in length that keeps in mind the concerns of the Yaqui people notably avoiding sacred areas including hills and springs.[21] However, the Yaqui people still have concerns about possible gas accidents, pollution of the Independence Aqueduct, deforestation, desertification, poverty, land rentals, and other forms of violence.[22]

Retrieved from "https://www.gem.wiki/w/index.php?title=Guaymas-El_Oro_Pipeline&oldid=294472"
Categories:
This page was last edited on 29 April 2022, at 15:13.
Content is available under Creative Commons Attribution-NonCommercial-ShareAlike unless otherwise noted.
Privacy policy
About Global Energy Monitor
Disclaimers