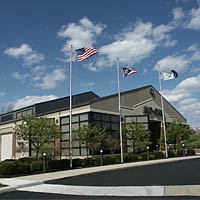 The AMP-Ohio headquarters in Columbus, Ohio.

American Municipal Power - Ohio (AMP-Ohio), based in Columbus, Ohio, is a 501(c)(12) nonprofit corporation, formed in 1971, which owns and operates electric facilities and provides generation, transmission, and distribution of electric power to 121 member municipal electric systems – 81 in Ohio, 27 in Pennsylvania, 7 in Michigan, 4 in Virginia, and 2 in West Virginia.

AMP-Ohio's 121 member communities represent 516,000 customers, whose peak load is approximately 3,500 MW. AMP-Ohio owns 31 generating stations that produced 573 MW of power in 2005. The company makes up the balance of its 3,500 MW peak load by purchasing power in Midwestern power markets. (AMP-Ohio's planned coal-fired Meigs County plant would increase the company's electricity production by 168% - representing a massive expansion for the company. The Meigs County plant is also strategically integral to AMP as a means of limiting power price increases for its customers; the average price of AMP electricity increased 31% between 2003 and 2006, due to rising energy costs.)[1][2] 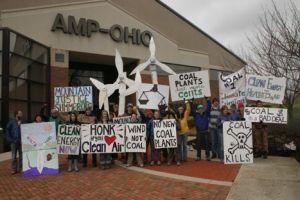 AMP-Ohio is currently moving ahead with plans to build a 960-MW power plant in Meigs County, Ohio. The Sierra Club, the Natural Resources Defense Council, and the Ohio Environmental Council filed a motion with the Ohio Power Siting Board in October 2007, calling for the project to be reviewed or rejected. Meigs Citizens Action Now, a grassroots community group of concerned citizens from Meigs County, is also actively campaigning against the plant.

In February 2009, AMP requested a $30 million loan from money set aside by state lawmakers for advanced-energy projects. The loan would help the company build its proposed coal plant in Meigs County, OH.

Environmental groups contend that the company should not qualify for the low-interest loan, arguing that the proposed plant is too similar to older Ohio plants, and that the scrubber system will not reduce the plant's estimated 7.5 million tons of carbon dioxide emissions per year. Although state officials have not yet approved the loan, they and AMP say the proposed plant qualifies, because it would use a more advanced scrubber to capture other pollutants such as sulfur dioxide and nitrogen oxides.[3]f

In June, 2009, Ohio Gov. Ted Strickland’s released a $30 million "bridge loan" for the project from state stimulus funds. The governor's office said the plant qualifies for the state money because of its use of pollution controls. The company said that the stimulus loan was a major factor in breaking ground on schedule. The stimulus funds are derived from federal stimulus monies intended to support "clean coal."[4][5]

On November 25, 2009 AMP announced it had canceled the plant due to the "escalating prices that have put the cost of the plant close to $4 billion. Two years ago, the estimated cost was $2.5 billion."[6]

In March 2008, activists with Mountain Justice Summer briefly occupied the AMP-Ohio corporate office, demanding a meeting with CEO Marc Gerken; after some stonewalling, Gerken met with the MJS activists, and in that meeting agreed to schedule a meeting of the Board of Trustees, in which impacted community members could discuss their concerns with the Meigs County plant.[7]

On July 7, 2008, approximately 75 Earth First! activists gathered outside the AMP-Ohio headquarters to again protest the company's plan to build American Municipal Power Generating Station in Meigs County. Two protesters climbed flag poles in front of the building and hoisted banners that read “No New Coal!” and “We won’t stop until you do”. Around 20 activists entered the building and occupied the lobby as five protesters locked themselves down using chains. Police used pepper-spray on the protesters and arrested eight when they refused to leave.[8][9].

Out of its total 576 MW of electric generating capacity in 2005, AMP-Ohio gets 36.9% from natural gas, 34.7% from coal, 19.8% from oil, 7.3% from hydroelectricity, and 1.3% from wind. (It should be noted, however, that - if AMP-Ohio's American Municipal Power Generating Station had been built - roughly 75% of the company generating capacity would have come from coal.) Virtually all of AMP-Ohio's power plants are in Ohio; the company has one hydroelectric plant in West Virginia.[10]

Gorsuch plant to close by 2012

On May 18, 2010, the U.S. Environmental Protection Agency (EPA) and the U.S. Justice Department announced that AMP would be permanently retiring the Richard H. Gorsuch Generating Station by Dec. 31, 2012, under a settlement to resolve violations of the Clean Air Act's New Source Review requirements. Interim sulfur dioxide and nitrogen oxide emission limits will be implemented until that date. Also part of the settlement, AMP will spend $15 million on an environmental mitigation project and pay a civil penalty of $850,000.[13]

In construction or operating

In June 2010, American Municipal Power announced it had partnered with Standard Energy, an affiliate of Standard Solar, to develop up to 300 megawatts of new solar energy generation capacity. The agreement between the two companies is for 30 years and is reported to yield one of the largest groups of solar electricity facility developments in the country, providing power in Ohio, Pennsylvania, Michigan, Virginia, Kentucky, and West Virginia.[14]

In spring 2010, US Congressman Charlie Wilson reported he spoke to President Barack Obama about funding to place a gas line in the area and later received a phone call from U.S. Secretary of Energy Steven Chu saying the $17 million for the project will be the top appropriation from the U.S. Department of Energy in an upcoming spending bill. Varnadoe said Congress would likely act on this spending bill this fall.[14]

Retrieved from "https://www.gem.wiki/w/index.php?title=American_Municipal_Power_-_Ohio&oldid=257004"
Categories:
This page was last edited on 14 July 2021, at 23:28.
Content is available under Creative Commons Attribution-NonCommercial-ShareAlike unless otherwise noted.
Privacy policy
About Global Energy Monitor
Disclaimers