The Antrim Shale is a formation of Upper Devonian age in the Michigan Basin, in the US state of Michigan, and extending into Ohio and Indiana. It is a major source of natural gas in the northern part of the basin.

The Antrim Shale was defined by A. C. Lane in 1901, and named for type-section exposures in Antrim County, Michigan. The formation was previously known as the St. Cleric Shale in Michigan, and the Genessee Shale in Indiana.[1]

The Antrim is a brown to black, pyritic, and organic-rich shale, from 60 to 220 feet thick. Total organic content varies from 1% to 20%. In some places the unit includes a gray calcareous shale or limestone, and in places a fine-grained sandstone at the base.

The formation is called the Kettle Point Formation in Ontario, and is the stratigraphic equivalent of the New Albany Shale in the Illinois Basin. It is overlain by the Bedford Shale, and underlain in some areas by the Jordan River Formation, and elsewhere by the Thunder Bay Limestone. 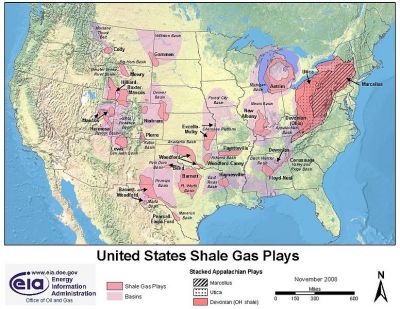 The Antrim Shale, is a major source of shale gas, and produces natural gas along a swath across the northern part of the state.[2] Most natural gas production is in Antrim, Crawford, Montmorency, Oscoda and Otsego counties.[3] 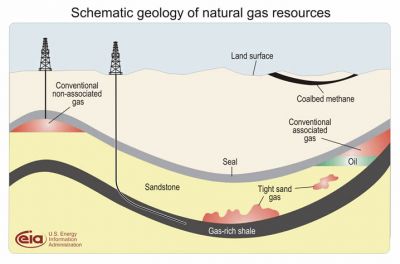 The shale appears to be most economic at depths of 600-2,200 feet. Original gas content ranges from 40 to 100 standard cubic feet per ton. Wells are developed on units of from 40 acres to 160 acres.[4] Horizontal drilling is not widely used. Antrim Shale wells often have to pump much initial water before gas production becomes significant, a behavior also seen in many coalbed methane wells.

In 2007, the Antrim gas field produced 136 billion cubic feet of gas, making it the 13th-largest source of natural gas in the United States.[7]

Wikipedia also has an article on Antrim Shale. This article may use content from the Wikipedia article under the terms of the GFDL.

Retrieved from "https://www.gem.wiki/w/index.php?title=Antrim_Shale&oldid=257141"
Categories:
This page was last edited on 14 July 2021, at 23:30.
Content is available under Creative Commons Attribution-NonCommercial-ShareAlike unless otherwise noted.
Privacy policy
About Global Energy Monitor
Disclaimers