The New Albany Shale is an organic-rich geologic formation of Devonian and Mississippian age in the Illinois Basin of the United States. It is a major source of hydrocarbons. 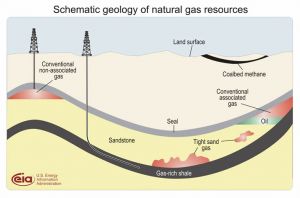 The New Albany formation consists of brown, black, and green shale with minor beds of dolomite and sandstone. It was deposited under anoxic marine conditions. Pyrite is a common accessory mineral, and parts of the shale have greater than 4% by weight of organic carbon. The black shale layers have anomalously high radioactivity (due to uranium), phosphorus, and heavy metals.[1] The formation was named for outcrops near New Albany, Indiana. It is one of a number of organic-rich shales of upper Devonian and lower Mississippian age in North America. It is correlative with the Antrim Shale of the Michigan Basin, the Ohio Shale of Ohio and eastern Kentucky, and the Chattanooga Shale of Tennessee and central Kentucky.

Wikipedia also has an article on New Albany Shale. This article may use content from the Wikipedia article under the terms of the GFDL.

Retrieved from "https://www.gem.wiki/w/index.php?title=New_Albany_Shale&oldid=235171"
Categories:
This page was last edited on 30 April 2021, at 11:02.
Content is available under Creative Commons Attribution-NonCommercial-ShareAlike unless otherwise noted.
Privacy policy
About Global Energy Monitor
Disclaimers