The map below shows the location of the project site, at Villa Ibaba, in Atimonan municipality, Quezon Province.

The Atimonan power station was originally proposed as a power plant fueled by liquified natural gas, but the project proponent, Meralco PowerGen, later changed the fuel to coal. In February 2015 the project was approved by the Quezon provincial legislative council, or Sangguniang Panlalawigan (SP). According to a report in BusinessMirror, 11 SP members, including presiding officer Vice Gov. Sam Nantes, were hosted in Taiwan on January 28 and 29 by a Taiwanese construction company on an all-expenses paid trip to view similar power plants. Final approval of the project rests with the national government.[1] The project received an environmental compliance certificate from the Environment Department on Oct. 13, 2015. Completion was planned for 2018.[2]

In November 2015, it was reported that Meralco was still searching for partners for the project, which was estimated at US$2 billion (P94.41 billion), "with the partner likely Japanese or Korean and probably not Chinese," according to company chairman Manuel Pangilinan.[3] In February 2016, Pangilinan expressed uncertainty about what sort of energy mix was favored by the Philippine government: "Should we turn to coal plants... should we turn to gas plants? What are the limits?” He said the Atimonan plant would be a "big question mark" because of its large size."[4]

The certificate of land use conversion for the project was received in March 2016. Construction of the resettlement site is ongoing. In September 2016 Meralco said it was hoping to find a partner for its Atimonan project by first quarter 2017. The estimated cost has risen to US$3 billion.[5]

As of early 2017, Meralco was looking for a foreign partner for the project — "Japanese, Korean. Probably not Chinese." The firm took proposals from potential partners in April. The debt portion of the project (i.e., the capital needing to be raised) was $2 billion; the equity portion was $700 million, for a total of $2.7 billion. Permits were in hand, and resettlement of 50 of the 70 families living on the site had been finished. The supply contract was also still pending. Meralco executives stated that they hoped to bring on an EPC contractor in the second quarter of 2017, start construction in mid-2017, and finish the project by the end of 2021.[6][7] In December 2017 Meralco signed an agreement with ESB International (ESBI), a subsidiary of the Electricity Supply Board of Ireland, under which ESBI would operate and manage the plant for its first ten years, after which it would be operated by Meralco.[8] In February 2018 it was reported that the Energy Regulatory Commission was still considering the proposed Power Supply Agreement for Antimonan and could not give a date for approving or rejecting it.[9]

In October 2018 Meralco announced that it would proceed with construction of Altimonan as a merchant plant that would sell power wholesale instead of through a Power Supply Agreement (PSA).[10] In April 2019 Meralco asked the government to expedite its review of power sharing agreements (PSA's) for seven of its plants, including Atimonan, due to power shortages in Luzon.[11] In April 2019 it was reported that construction had not begun because the plant did not have approval for its power supply agreement from the Energy Regulatory Commission.[12]

In May 2019 the Supreme Court of the Philippines invalidated the plant's Power Supply Agreements (PSA's) because they had not gone through a competitive selection process (CSP), delaying development of the plant. In all seven plants owned by Meralco or contracting with Meralco had their PSA's invalidated by the ruling.[13] In October 2019 State Rep. Carlos Isagani Zarate of the Bayan Muna party and Bayan Muna Party Chair Neri Colmenares filed a court petition to require Meralco to tap an independent bidding supervisor, not itself, for power supply agreements or PSAs.[14][15]

In April 2021, Meralco announced that it was abandoning plans to construct the 660 MW coal-fired Subic power station, specifically citing an intention to move away from coal.[18] After the Subic closure was announced, environmental activists said they expected Meralco to cancel plans for the Atimonan plant as well, citing the decision of a major bank to pull funding from both the Subic and Atimonan projects.[19]

The December 2020 Philippines Department of Energy report of committed power stations listed a target operation date of 2024 for Unit 1, but now lists the target date for Unit 2 as "TBD". The report states that delays are due to the plant's ongoing failure to secure a power service agreement with the government after the 2019 Supreme Court ruling (see below).[20] The March 2021 Philippines Department of Energy report pushed back the target completion date of Unit 1 to 2025; Unit 2 remains "TBD".[21]

As of June 2022 there had been no progress on the plant in more than two years, and the Philippine Movement for Climate Justice reported that it is stalled.[22] The project appears to be shelved. In August 2022 documents, target testing, commissioning and operating dates were removed.[23]

In May 2019 the Supreme Court of the Philippines ruled that all power supply deals entered into after June 30, 2015 must undergo a Competitive Selection Process (CSP). The case stemmed from a petition filed by the Alyansa Para sa Bagong Pilipinas Inc. against the ERC, the DOE, and several power distribution utilities, including Meralco, in 2016. The decision will delay construction of the Atimonan plant as it undergoes a CSP.[24][25] 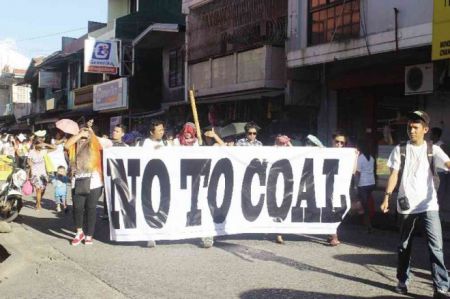 In June 2015, more than 1,500 protesters, led by church leaders, staged a march and a prayer vigil in opposition to the project. The protest, which was named "Lakad-Dasal-Bibliya para sa Kalikasan (roughly translated: "Bible prayer walk for nature") began with a march in which participants circled the town, then stopped in front of the municipal hall before continuing to Our Lady of the Angels Parish Church. At the church, the protesters heard speeches, performed dances and songs, and then held an overnight vigil.[26]

In October 2017, activists rallied in front of the Bank of the Philippine Islands office in Ayala Triangle to protest its financing of the Atimonan coal plant. “Coal is not the answer to our country’s energy needs,” said Philippine Movement for Climate Justice Coordinator Ian Rivera. “Contrary to the coal industry’s persisting propaganda, coal is neither cheap nor clean. In fact, it has time and again been proven to be dirty, costly, and deadly.”[27]

In November 2019 activists filed a petition with the Department of Environment and Natural Resources to cancel the Environmental Compliance Certificate for the plant due to “breaches to environmental and community education requisites," including cutting of coconut trees without a permit and failure to conduct a Information, Education, and Communication (IEC) program about the plant's impacts.[28] 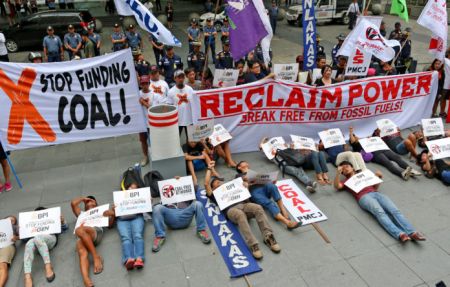 October 2017: Activists protest in front of the Bank of the Philippine Islands

In September 2020, environmental activists rallied around a Philippine diocese in Quezon province demanding the government stop the construction of new coal-fired plants in the area as it is inconsistent with the efforts to mitigate climate change.[29] Bishop Mel Rey Uy of Lucena released a statement, signed by over 100 members of the clergy, on Tuesday, September 1, 2020, calling for plans for the proposed power plants to be scrapped.[29] 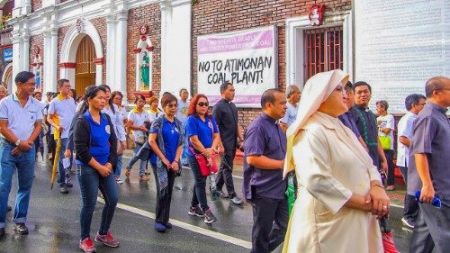 In 2020, Meralco announced that due to health and safety issues posed by the coronavirus outbreak it had temporarily stopped pre-construction "site activities" on various power projects, including at the Atimonan plant.[30] Site work resumed in June 2020 as the Philippine government relaxed quarantine measures in Luzon.[31]

On October 27, 2020 the Philippine Department of Energy imposed a moratorium on the construction of new or "greenfield" power plants, meaning those which have yet to begin construction.[32] Meralco subsequently confirmed that its planned greenfield coal plants were cancelled.[33] In November 2020 DOE Secretary Alfonso Cusi clarified that projects listed as "indicative" by the DOE would still be considered and might still be developed.[34]

A 2018 news reports state that the Atimonan power station had secured a preliminary financing deal with eight local banks for a Php107.5b (US$2.1b) loan.[35][36] According to BankTrack, known funders of the Atimonan power station include ESB International, the World Bank through local bank Rizal Commercial Banking Corporation (RCBC), Bank of the Philippine Islands, and Philippine National Bank.[37]

In December 2020, Rizal Commercial Banking Corporation (RCBC) committed to stop financing new coal-fired power stations.[38] In April 2021, a spokesperson for the Power for People Coalition in the Philippines stated that a US$$1.056 billion loan from Bank of the Philippine Islands "did not push through."[39]

In 2017, the Philippine Movement for Climate Justice lodged a formal complaint against the International Finance Corporation (IFC) for its involvement in Philippine coal-fired power stations. The complaint alleged that the IFC had funded these projects through its financial support to Rizal Commercial Banking Corporation (RCBC). The Atimonan power station was one of 11 power stations for which the IFC's involvement was found to be sufficient to trigger the IFC's internal accountability process.[40]

Retrieved from "https://www.gem.wiki/w/index.php?title=Atimonan_power_station&oldid=362550"
Categories:
This page was last edited on 2 November 2022, at 16:20.
Content is available under Creative Commons Attribution-NonCommercial-ShareAlike unless otherwise noted.
Privacy policy
About Global Energy Monitor
Disclaimers