The Black Mesa coal mine in Arizona was operated by Peabody Energy for thirty years before being suspended in 2005.

In May 2008, the Office of Surface Mining re-activated the Draft Environmental Impact Statement for Peabody’s plan to expand the Black Mesa mine and opened a public comment period that ends on July 7. On June 13, citizen groups requested a suspension or indefinite extension of the comment period in order to resolve a number of issues, including changes to the expansion plan since the original comment period in 2006, and to allow sufficient time for affected Native American tribes to comment. The changes in question include combining the Black Mesa and Kayenta mines into one life-of-mine permit, which will allow Peabody to mine until there is no coal left. In addition, there are concerns about the impact on the health of the local Navajo and Hopi people, as well as considerations arising from the cultural, environmental and religious significance of the land.[1][2]On June 24, OSM rejected the request for a suspension or extension of the public comment period.

On December 22, 2008, the Office of Surface Mining Reclamation and Enforcement granted Peabody permission to expand their Kayenta Mine permit. This revision expands the boundary of the overall mining area by about 19,000 acres to mostly coincide with the lease boundary and coal reserves the Navajo Nation and Hopi Tribe leased to Peabody. Approximately 5,500 acres on Black Mesa Complex would be incorporated into the permit area for mining. In addition to long standing controversies over mining on Black Mesa, the new revision may involve the relocation of five Navajo families on mining-permitted land and a decrease in water quality in local wells.[3]

On the same day as the permit revision, Hopi Tribal Chairman Ben Nuvamsa resigned in an effort to end the divisive tribal conflict over whether Peabody should control Black Mesa’s coal resources and aquifers. Vice-chairman Todd Honyaoma Sr. also resigned as of Dec. 31, leaving questions about the tribe’s leadership. According to Nuvamsa, immediate action should be taken on the Black Mesa EIS and permit and on restoration of the tribe’s appellate court, which was suspended as part of a long-standing tribal council. He stated, “Our teachings tell us that we must not exploit our resources as they are important to the preservation and perpetuation of our tradition and our ceremonies and to our future as Hopi and Tewa people. Our sovereignty, albeit limited, is important. We cannot delegate our sovereignty or give it away to an outside organization.”[4]

On March 13, 2009, a group of Hopi tribal members issued a letter to the Office of the Regional Soliciter General, contending that the Department of the Interior should disqualify itself from simultaneously representing the Hopi Tribe and the Office of Surface Mining (OSM) in the controversy over coal development. The Hopi have requested outside counsel to represent the Hopi Tribe and OSM separately. According to the group, “The federal government, when called upon by a tribe to represent its interests in a particular case, cannot claim to be a competent, ethical trustee if it represents an adverse party in the same case.”[5]

In December 2009, the U.S. Environmental Protection Agency withdrew the water discharge permit for the Black Mesa mine pending public hearings. Tribal and conservation groups appealed to have the permit withdrawn due to the discharge of heavy metal and pollutants threatening washes, tributaries, groundwater and drinking water for nearby Navajo and Hopi communities.[6]

On January 7, 2010, an administrative law judge of the Department of Interior withdrew Peabody Coal Company’s life-of-mine permit issued December 22, 2008 for operations at Black Mesa coal mine, and remanded the permit back to OSM. According to Judge Robert G. Holt, OSM violated the National Environmental Policy Act (NEPA) by failing to prepare a supplemental draft environmental impact statement (EIS) when Peabody changed the proposed action. Consequently, the final EIS "did not consider a reasonable range of alternatives, described the wrong affected environment baseline, and did not achieve the informed decision making and meaningful public comment required by NEPA."[7][8]

In April 2010, the Navajo Nation Council spent nearly an entire day discussing the 10-year coal royalty rate “reopener” with Peabody Western Coal Co. for Black Mesa leases before it was determined that the deal is dead because the resolution was tabled by Council in December and an attempt to bring it back failed.[9] However, in August 2011 it was announced that the Navajo Nation, Peabody Energy, Salt River Project and Southern California Edison had reached an agreement which "continues the current royalty rate for Peabody's Arizona operations and provides for bonus payments, scholarship funding and other benefits to the Nation."[10][11]

The Environmental Protection Agency is giving the public 30 additional days, or until April 30, 2010, to provide comment on the proposed water discharge permit for Peabody's Black Mesa mine complex.[12]

The Black Mesa region of Arizona, indigenous home of the Diné (Navajo) and Hopi peoples, is the location of the largest coal deposit in the United States, with approximately 21 billion tons of coal and a long-term value as high as $100 billion.[13] 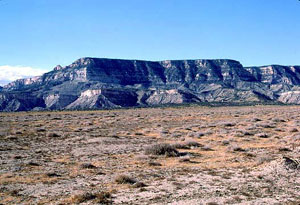 Peabody Western Coal Company began strip mining operations on Black Mesa in 1968, and until recently this was North America’s largest strip mining operation and site of the only operating long-distance coal slurrypipeline (owned by Southern Pacific). During its operation, the Black Mesa coal mine fed the Mohave Generating Station, a power plant in Laughlin, Nevada, via the 273 mile long pipeline. 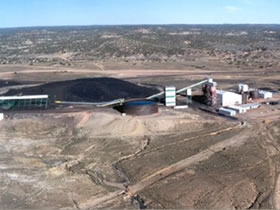 Peabody pumped over a billion gallons of water from the Black Mesa aquifer each year to make the coal slurry, resulting in a substantial loss of groundwater in Black Mesa.[14][15]

The second mine on Black Mesa is the Kayenta Mine, which supplies the Navajo Generating Station. The coal power generated from these two plants has powered Las Vegas, Los Angeles, Phoenix and other areas on the southwestern power grid for three decades. Royalties and taxes from the mines provided approximately 80 percent of the Hopi general operating budget and 60 percent of the Navajo general fund budget.[16]

In 2005, the Mohave Generating Station shut down as a result of a Clean Air Act lawsuit and because Navajo and Hopi tribes both passed resolutions ending Peabody’s use of the Black Mesa aquifer. According to the EPA, the coal plant was the dirtiest in the Western U.S., emitting up to 40,000 tons of sulfur dioxide per year.[17]

The owners of Mohave chose to shut down the plant rather than upgrade it to acceptable pollution standards. Since the plant was the sole customer of the Black Mesa mine, and because Peabody did not have an alternative source of water, operation of the mine and slurry line ceased as well.

In addition to the impact of coal on the natural environment of Black Mesa, twelve thousand Navajos have been removed from their lands due to the mining, the largest removal of Native Americans since the 1880s.[18] John McCain authored the relocation bill, called the 1974 Navajo-Hopi Settlement Act.[19] 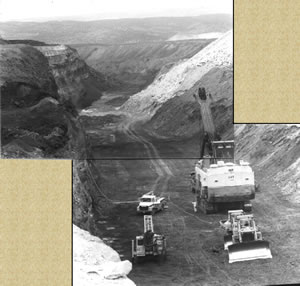 In May 2006, the Office of Surface Mining released a Draft Environmental Impact Statement (DEIS) for Peabody's plan to expand the Black Mesa coal mine. In addition to expanding the mine, the plan included the building of a coal-washing facility, use of the Coconino and Navajo Aquifer, and re-building the coal slurry-line to transport coal to the Mohave Generating Station. The recently re-activated DEIS has been changed such that the Black Mesa coal mine will supply coal to the Navajo Generating Station near Page, Arizona and its permit will be merged with the Kayenta life-of-mine permit.

To see a listing of coal mines in a particular state, click on the map:

Retrieved from "https://www.gem.wiki/w/index.php?title=Black_Mesa_coal_mine&oldid=13603"
Categories:
This page was last edited on 25 December 2019, at 21:13.
Content is available under Creative Commons Attribution-NonCommercial-ShareAlike unless otherwise noted.
Privacy policy
About Global Energy Monitor
Disclaimers