Coal and jobs in the United States

Here is a breakdown of the geographical distribution of underground coal mining jobs in 2006 (with coal production in thousands of short tons):[4][5]

From these data, we can see the huge discrepancy in coal mine productivity between Western and Eastern mines. Montana (with 942 coal miners) produces more coal than Virginia (with 5,262 coal miners). Wyoming (with 5,837 coal miners) produces more coal than West Virginia, Kentucky, Pennsylvania, Virginia, Alabama, and Illinois combined (with a total of 58,995 coal miners). Due to this discrepancy, the coal mining industry has increasingly moved production to these Western states (especially to the Powder River Basin), and has dramatically cut its workforce in Appalachia.

Since 1900, technological developments in the coal mining industry have dramatically increased miner productivity; thus, while U.S. coal production is currently at a record high, mining employment is a fraction of what it was during the heyday of coal mining in the 1910's and 20's:[6][7][8][5]

Earnings and unionization in coal mining

According to the U.S. Bureau of Labor Statistics, the average earnings of nonsupervisory coal workers in 2006 was $1,093 per week or $22.08 per hour. For private industry as a whole, average nonsupervisory worker earnings in 2006 were $568 per week or $16.76 per hour. In the coal, metal ore, and nonmetallic mineral mining industries, 19 percent of workers were union members in 2006, compared with 12 percent of workers throughout private industry.[9]

Using this estimate, we can create an approximate calculation of the total employment of operation & maintenance staff in coal-fired power plants in the U.S.:[14]

Average coal power plant employment has fallen dramatically over the past few decades - both due to technological developments and to rising labor costs. In 1985, according to the EIA, the average 300 MW coal-fired power plant had 78 employees; thus, employment per megawatt declined by 32% between 1985 and 1997.[13]

Again, according to their 2001 analysis of Energy Information Administration data, Singh & Fehrs - starting with the proportion of coal that is transported by various means (95.9% by rail, 3.8% by barge, and 0.4% by truck), then calculating the average jobs per unit cost for these shipping industries, then applying coal shipping costs to these calculations - estimate that coal transportation employed 30,757 workers in 1995.[12]

The average age of coal plant workers is 48 years. A study by Krishnan and Associates concluded that "a 2,000 MW coal-fired plant with about 200 to 250 employees will likely lose half its current plant staff in the next decade due to retirement, attrition and other similar issues."[16]

The average age of coal miners in West Virginia is 55.[17]

There are 404 coal-fired power plants in the U.S. with a capacity greater than 100 MW. The median 2005 poverty rate in the counties in which these 404 plants are located was 13.4% - roughly the same as the U.S. average. Here is a graph of the distribution of these 404 plants by 2005 county poverty rate:

A 2011 Ochs Center for Metropolitan Studies report, "A Fraction of the Jobs" found that power companies have overestimated the number of jobs created by new coal-fired power plants. The analysis looked at the six largest new coal-fired power plants to come online between 2005 and 2009, and combed through each project’s initial proposals and job projection data, including public statements, published documents and other material. They then compared that data to actual employment — before, during and after construction — in the areas where the projects were built, relying chiefly on the Bureau of Labor Statistics’ Quarterly Census of Employment and Wages.[21]

They found that only a little over half - or 56 percent - of every 1,000 jobs projected, appeared to be actually created as a result of the coal plants’ coming online. In four of the six counties, the projects delivered on just over a quarter of the jobs projected. Only one county, the Walter Scott unit number 4 project in Pottawattamie County, Iowa, saw an increase in construction employment that was roughly commensurate with the numbers predicted before the project there got under way.[21] 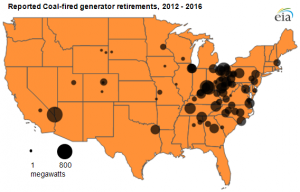 In September 2011, the National Mining Association issued a press release stating that potentially 1.24 million jobs in 36 states had been destroyed by the Sierra Club’s “Beyond Coal” campaign aimed at stopping construction of new coal-based power plants. The number was based on NMA projections of jobs that would have been created had the plants come online. The Sierra Club stated that power companies routinely overstate the number of jobs that would be created by a new plant, and that the report did not take into account the jobs created in other energy sectors because the coal-fired power plants were not built.[22]

Some companies argue that coal regulations would affect jobs in the power industry and slow overall economic growth. A June 2011 study by the Economic Policy Institute (EPI), "A lifesaver, not a job killer: EPA's proposed "air toxics rule" is no threat to job growth" found that new regulations on mercury, arsenic and other toxic air pollution from power plants proposed by the Environmental Protection Agency (EPA) in March 2011 would actually have a slightly positive impact on job growth and economic health.

The study found that:

According to MSHA data, the number of mining jobs in Appalachia has increased by 3.5 percent since the EPA began its enhanced review of mountaintop-removal permits in 2009, and 8.5 percent since the start of the 2008 recession. Grist argues that because underground mines employ more miners than mountaintop-removal mines for every ton of coal unearthed, stricter enforcement leads to an increase in mining jobs.[23]

An April 2011 study, “Mountaintop removal and Job Creation: Exploring the Relationship Using Spatial Regression” published in the peer-reviewed Annals of the Association of American Geographers (subscription req'd), looked at GIS data of West Virginia strip-mine permit boundaries and compared it to population and economic data to see if being located near a larger mining operation made a community more likely to have large numbers of residents employed by the coal industry. They found that, contrary to pro-MTR arguments, "there was no supporting evidence suggesting MTR contributed positively to nearby communities’ employment."

The study said: "Our research question was straightforward: Is there a relationship between the size of MTR mining and employment, which justifies the ‘coal means jobs’ mantra? The results of the overall model suggested insufficient evidence to support a positive relationship between mine size (either MTR mining or underground mining) and percentage of the working population employed in coal mining. This finding casts doubt on the pervasive and dominant argument of MTR advocates." The study noted that it looked only at direct employment by the mining industry, and not other local occupations that service that industry.

Tracking numbers from the Kentucky Energy and Environment Cabinet showed employment at Eastern Kentucky mines falling from 13,608 jobs in December 2011 to 9,540 in December 2012 — a decline of 4,068 jobs. Production in the area also fell to 49.4 million tons — the lowest level since 1965. The decline has been attributed to the increasing use by US utilities of natural gas over coal, the updating of coal regulations, and that the remaining coal in Eastern Kentucky is harder to extract, making the costs of production higher. Employment and production in western Kentucky remained steady.[24]Arthur Neslen, "Spain to close most coalmines in €250m transition deal," The Guardian, 26 October 2018</ref>

In October 2018, the administration of Pedro Sánchez struck a deal with unions for a €250 million investment program in mining regions over the next decade. More than 1,000 miners and subcontractors will lose their jobs when 10 mines close at the end of 2018. The miners were uneconomic but were kept open under a €2.1bn state aid plan. Under the jobs deal, 600 coal workers will benefit from social aid, while about 60% of the miners will be able to opt for early retirement. As recently as the 1960s, Spain had more than 100,000 coal miners.[25]

The 2013 Appalachian Voices report, "Growth of U.S. Coal Jobs: Federal Data Showing Coal Mining Employment Trending Higher Since 2009," looks at Mining Safety and Health Administration data on coal mining jobs, which shows that the average number of coal-mining jobs under the Obama administration has been 15.3 percent higher than the average under George W. Bush. The report points to increased exports and decreasing productivity - requiring more workers to extract harder to reach coal - as reasons for the increase.

Retrieved from "https://www.gem.wiki/w/index.php?title=Coal_and_jobs_in_the_United_States&oldid=242803"
Categories:
This page was last edited on 5 May 2021, at 18:54.
Content is available under Creative Commons Attribution-NonCommercial-ShareAlike unless otherwise noted.
Privacy policy
About Global Energy Monitor
Disclaimers