The undated satellite photo below shows the Bursa Keleş lignite coal mine, which is near Keleş town, Keleş district, Bursa province. The coal plant would presumably be built near the mine. 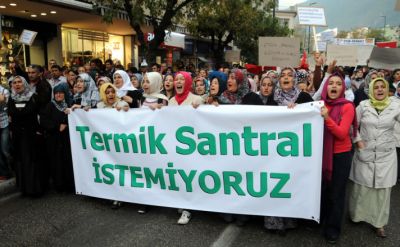 A protest in Keleş against the proposed Bursa coal plant in October 2012. The banner reads "we don't want the thermal power plant."[1]

In July 2013, the state-owned Turkish Coal Enterprises (TKI) announced that it had awarded Çelikler Elektrik Üretim a contract to build a 270-MW coal-fired power plant near its Bursa-Keleş coal mine. Çelikler has applied for environmental permits for the plant.[2][3]

There have been protests in Keleş since at least 2007 against the proposed construction of a coal plant in the area, with local civil society organizations playing a leading role.[4][1]

According to the Turkey Energy Market Regulatory Authority website, the power station's pre-license expired on October 2, 2017, and it never received an approved EIA permit. With no new applications filed, the project appears to be defunct.[5] In addition, the EIA report was cancelled as of January 2017, and the project is neither on the pre-permit nor permit list of EMRA.[6]

Retrieved from "https://www.gem.wiki/w/index.php?title=Bursa_power_station&oldid=197679"
Categories:
This page was last edited on 1 May 2020, at 19:36.
Content is available under Creative Commons Attribution-NonCommercial-ShareAlike unless otherwise noted.
Privacy policy
About Global Energy Monitor
Disclaimers