Traditionally known as Carbon Capture and Storage (CCS), Carbon Capture Utilization and Storage (CCUS) is a newly rebranded name that primarily stands for using carbon dioxide for enhanced oil recovery, or CO2 enhanced oil recovery (CO2 EOR). CO2 EOR involves injecting a recycled loop of carbon dioxide into legacy oil fields to force out 8-20% more of the original oil in place out of the well.[1] 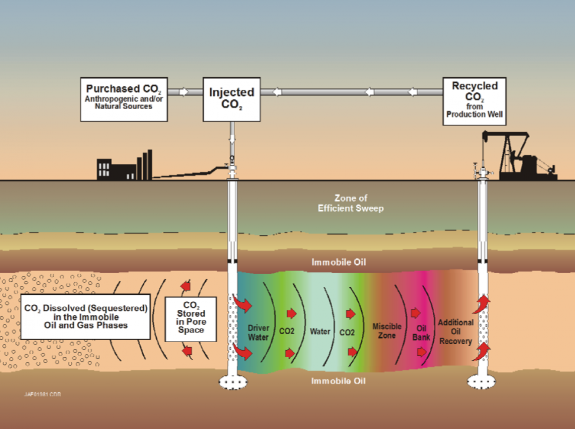 The public relations framing shift from CCS to CCUS sat at the center of a rebranding effort that began in 2012 by the Obama Administration and the oil industry. The "U" in CCUS, in this case, is using carbon to drill for more oil.[2]

Natural carbon dioxide is currently the source of 78.7% of the CO2 for CO2 EOR in the United States[3] and CO2 EOR currently is the final carbon sink for nine of the ten biggest U.S.-based Carbon Capture and Storage (CCS) projects currently commercially operational.[4]

Carbon capture, as opposed to getting carbon from natural sources, involves creating anthropogenic capture units on power plants or other industrial facilities. The Biden White House American Jobs Plan infrastructure package proposal calls for increased guaranteed loan vehicles and tax credits to boost CCUS,[5] which is a fulfillment of Biden's campaign pledge to "double down" on subsidizing the apparatus.[6] CO2 EOR and CCUS primarily is a regional market today, with major markets in Texas' Permian Basin, Mississippi, Louisiana, Montana, and Wyoming. The Permian Basin is by far the biggest CO2 EOR field and Occidental is the top CO2 EOR driller there.

Beginning in 2011-2012, the oil industry and the U.S. Department of Energy began rebranding Carbon Capture and Storage as CCUS for CO2 enhanced oil recovery,[7] an effort coordinated by the DOE Office of Fossil Energy, then led by Charles D. McConnell. U.S. Rep. Mike Conaway, who represented a district overlapping with the Permian Basin, also chipped in on the rebranding rollout effort during a 2011 press conference kickoff event hosted by the National Enhanced Oil Recovery Initiative.[8][9] The National Enhanced Oil Recovery Initiative has since also rebranded as the Carbon Capture Coalition.[10]

The Energy Department further spearheaded the rebrand by publishing the 2011 report titled “Improving Domestic Energy Security and Lowering CO2 Emissions with 'Next Generation' CO2-Enhanced Oil Recovery (CO2-EOR),”[11] co-written by an author list that included one who now works for Shell.[12]

One of the co-authors of that report, Vello Kuuskraa, sat on a panel in 2012 before the Atlantic Council—funded by companies such as BP, Eni, Tellurian, ExxonMobil, ConocoPhillips[13]—titled "How Far Can CO2 Enhanced Oil Recovery Drive Carbon Capture, Utilization and Storage?"

"In the absence of US legislative action on climate policy, there has been a shift in US policy emphasis from carbon capture and storage (CCS) technology to CCUS with the 'U' for 'utilization' for EOR," a description for the event explained. "This briefing investigated current domestic carbon and oil market dynamics, examined the potential for CO2 EOR, and addressed the challenges of implementing large-scale EOR with CO2 capture and storage. It also outlined supportive policies and actions that could accelerate the integrated use of CO2 EOR and CCS."[14]

"This addition reflects a new reality: in the absence of strong climate policy, the key driver of CCS innovation is the utilization of CO2 for enhanced oil recovery (CO2-EOR)," wrote Judith Greenwald, then the Vice President for Technology and Innovation for the Center for Climate and Energy Solutions (C2ES). "This is a little-known technique in which CO2 (usually drawn from naturally occurring underground reservoirs) is injected into declining oil fields to boost their output."[17] C2ES, headed by Bob Presciape--former Deputy Secretary of the U.S. Environmental Protection Agency under Obama--has a member list including BP, Cheniere, Shell, Southern Company, Duke Energy, Equinor, Dominion and PG&E.[18]

Greenwald proceeded to get a job as Deputy Director for Climate, Environment and Energy Efficiency for the U.S. Department of Energy and Senior Climate Advisor to U.S. Energy Secretary Ernest Moniz.[19] Moniz is a major backer of CCUS and serves on the Board of Directors and Board of Advisors of companies aiming to profit from the scaling up of the technology.[20]

Just days before the rebranded Annual Conference on Carbon Capture Utilization & Sequestration, the U.S. Department of Energy announced it was adding "utilization" to the CCS moniker.

"The Energy Department is strategically focusing the program’s R&D toward the economic 'utilization' of captured carbon dioxide (CO2) for commercial purposes – evolving from CCS to Carbon Capture, Utilization and Storage, or CCUS. By putting the captured CO2 to use, CCUS provides an additional business and market case for companies or organizations to pursue the environmental benefits of CCS.," wrote McConnell. "There are a number of emerging applications in this regard, but the major near-term opportunity is in CO2 enhanced oil recovery (EOR), or injecting CO2 into depleted oil wells to recover untapped oil."[21]

McConnell previewed the rebrand during his 2011 confirmation hearing before the U.S. Senate Committee on Energy and Natural Resources.

“What we're now beginning to talk very regularly and routinely about is carbon capture utilization and storage," said McConnell. "The utilization is speaking in terms of taking that carbon dioxide and in the process of enhanced oil recovery being able to put it into geological formations to do two things: one, to be able to recover vast quantities of unrecoverable oil without the use of CO2; and in the process of recovering and enhancing that oil and getting the returns associated with it, it's also then permanently stored and sequestered."[22]

Yet, not everyone is enthusiastic about the name change.

"This frame fundamentally shifts the composition and purpose of CCS from a greenhouse gas mitigation strategy to a mechanism to commodify CO2 and extract more fossil fuels," explains a 2016 paper on the 2012 conference at which the rebranding effort took hold. "This frame maintains a commitment to fossil fuels, limits the climate mitigation potential of CCS, and assumes a need for increased energy production and consumption."[23]

One CO2 EOR conference organizer, who has done the conferences for decades even prior to CO2 EOR being lumped in as a climate solution, notes in explaining the history of the conference that "EOR was an unavoidable by-product of the injection" and that the "storage story" is something he explained to a U.S. Department of Energy official beginning in the early 2000's.[24]

In 2015 under the Obama Administration, the U.S. Geological Survey published a report, "Fundamentals of Carbon Dioxide-Enhanced Oil Recovery (CO2-EOR)—A Supporting Document of the Assessment Methodology for Hydrocarbon Recovery Using CO2-EOR Associated with Carbon Sequestration," called for via 2007 legislation. That report detailed CO2 EOR recovery potential within U.S. oil fields.[25] The legislation, the Department of Energy Carbon Capture and Storage Research, Development, and Demonstration Act of 2007 (S.962),[26] received lobbying support from companies such as BP, Occidental, ExxonMobil, and the U.S. Oil and Gas Association.[27]

During the CO2 EOR process, CO2 is not merely stored underground immediately. Instead, it is recycled as part of what the Global CCS Institute describes as a "closed loop," which "reduces the need to purchase additional CO2."[28]

“The need for the field to purchase new CO2 is gradually reduced over time,” explains a 2019 paper published by the U.S. Department of Energy. “As a result, a greater percentage of the CO2 injected is from production, separation, and recycling versus newly-purchased CO2.” That paper further explained that “approximately half has been recovered and recycled” and more broadly “CO2 EOR operators try to maximize oil and gas production and minimize the amount of CO2 left in the reservoir.”[29]

In 1991, a production supervisor at Shell at the Jackson Dome further explained, "We're recycling everything we produce. Eventually the flood will be mature enough that all we'll be doing is recycling. We won't have to bring any more down from Jackson Dome."[30]

A 2010 paper by the National Energy Technology Laboratory also explains the exact money saved by doing the recycling process, writing that "Because of the cost of naturally sourced CO2—roughly $10-15 per metric ton—a CO2 flood operator seeks to recycle as much as possible to minimize future purchases of the gas."[32]

Retrieved from "https://www.gem.wiki/w/index.php?title=Carbon_Capture_Utilization_and_Storage&oldid=242234"
This page was last edited on 3 May 2021, at 04:04.
Content is available under Creative Commons Attribution-NonCommercial-ShareAlike unless otherwise noted.
Privacy policy
About Global Energy Monitor
Disclaimers