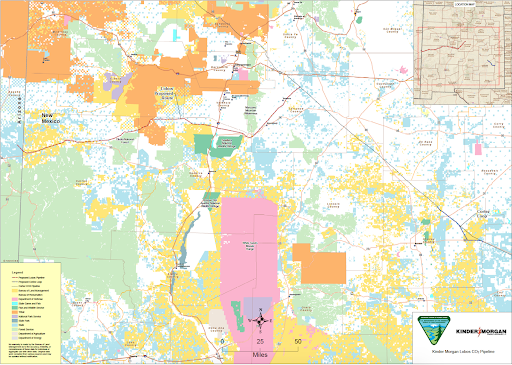 The 214-mile pipeline was slated to extend from the St. John's Dome into the Permian Basin, where it would be used to facilitate CO2 enhanced oil recovery (CO2 EOR), the mainstay use within Carbon Capture Utilization and Storage (CCUS). CO2 EOR frees up an additional 8-20% of the original oil in place.

But the pipeline faced opposition from community groups[2] and in 2015, Kinder Morgan temporarily pulled the plug on the application it had filed with the U.S. Bureau of Land Management. The company cited "market conditions" as its rationale for leaving the project behind.[3]

After Kinder Morgan shelved the pipeline, the community group opposing the pipeline named Resistiendo/Resist the CO2 Pipeline said in a press statement that “Members are cautiously optimistic that New Mexico will not be the site of another unwanted, unneeded pipeline that could do serious harm to our sensitive environment, disturb historical and cultural areas and impact critical watershed areas in the region.”[4]

Natural carbon dioxide is currently the source of over 80% of the CO2 for CO2 EOR in the United States[5]and CO2 EOR currently is the final carbon sink for nine of the ten biggest U.S.-based Carbon Capture and Storage (CCS) projects currently commercially operational.[6] Traditionally known as CCS, CO2 EOR is a central component of a rebranding effort which began in 2012 known as CCUS, or carbon capture utilization and storage. The "U" in CCUS, in this case, is using carbon to drill for more oil.[7]

According to a 2014 U.S. Department of Energy study, 97% of the industrial marketed carbon is used for CO2 EOR.[8]

Due to a lack of what the group thought was a robust environmental impact statement (EIS) conducted by the Bureau of Land Management, Resistiendo wrote its own health impact assessment in contract with the group Human Impact Partners.[9]

The report concluded that residents from the county, ranking among the lowest in the state for socioeconomic status, feared land-use impacts of the pipeline and its inability to bring a large number of long-term jobs to the county's residents. The residents interviewed as part of the health assessment also cited fear of a pipeline explosion and lack of accompanying emergency medical facilities in the county. They also cited fears of destruction of ancient historical sites, including three sites located at the Salinas Pueblo Missions National Monument listed on the National Register of Historic Places.[10]

In its press release announcing the tabling of the project, the Rio Grande Chapter of the Sierra Club cited that "Many landowners had refused to sign right-of-way easements, and Resistiendo had suggested a lower-impact route that avoided the majority of private properties in Torrance County as well as the critical Abo Watershed and dense areas of Salinas Missions ruins, prehistoric pueblo communities and burial mounds. This alternative would have entailed additional time."[11]

In 2013, Kinder Morgan told the Arizona Oil & Gas Corporation Commission that it had hit a "gusher" at the St. John's Dome and planned to drill for carbon at 25 different well locations.[12] That same year, the company secured two CO2 drilling permits from the agency.[13] A year later, the company secured another five CO2 well permits.[14]

Kinder Morgan entered into the St. John's Dome in 2010 after acquiring the assets of the company Enhanced Oil Resources and completing the sale in 2012.[15][16]

In 2014, Kinder Morgan announced a $1 billion spend on the field, which included $300 million on building out the Lobos Pipeline.[17] The company had announced intentions of drilling for 250 CO2 wells at the field.[18]

An industry engineer told the outlet Capital & Main that CO2 drilling is akin to drilling for oil and gas, at its core.

“It’s really the same tools, the same equipment, the same calculation going on. It’s just using different types of numbers,” the engineer stated. “But you find a CO2 source field, which obviously can be several thousand feet underground, and you move a drilling rig in and you drill for it.”[20]

Retrieved from "https://www.gem.wiki/w/index.php?title=Lobos_Pipeline&oldid=247184"
This page was last edited on 28 May 2021, at 02:02.
Content is available under Creative Commons Attribution-NonCommercial-ShareAlike unless otherwise noted.
Privacy policy
About Global Energy Monitor
Disclaimers