Cerrejón coal mine or minera del Cerrejón is a surface mine, owned by the Cerrejón Coal Company, a subsidiary of Glencore[1][2], near the village of Albania in the La Guajira department of Colombia.

Cerrejón is the largest coal mine in Latin America and the tenth biggest in the world.[3]

In 2011, the mine underwent an expansion, called the Cerrejon P-40 Expansion.

The satellite photo below shows the location of the Cerrejón coal mine, in the southeast of the department of La Guajira, near the Colombian-Venezuela border. The coal mine is situated in the northeastern part of the Cesar-Ranchería Basin, the basin of the Ranchería River, between the Sierra Nevada de Santa Marta in the west and the Serranía del Perijá to the southeast.

The Cerrejón mine comprises four zones: the North Zone, the Central Zone, the Patilla area and the South Zone.[4]

BHP Billiton boasted on its website in 2011 that "Cerrejón's open-cut mines now represent one of the biggest earthmoving operations worldwide. Approximately one million tonnes of material are moved every day, 365 days per year. To achieve this, the operation runs one of the biggest fleets of shovels and trucks in the world. The company employs nearly 4,000 people, with approximately the same number engaged as contractors."[4]

On its website, Xstrata Coal states that "in December 1976, an Association Contract was signed between Carbocol S.A., a state owned coal company, and Intercor, an ExxonMobil affiliate, for the development of Cerrejón North Zone. In January 1999, an agreement with the Government of Colombia extended this phase an additional 25 years more, until 2034.[5]

In November 2000, the Colombian Government sold Carbocol S.A.’s (50%) participation in Cerrejón North Zone Association Contract, to a consortium made up of subsidiary companies of BHP Billiton plc, Anglo American plc and Glencore International AG. In February of 2002, the consortium acquired the remaining 50% from Intercor and merged Intercor with Carbones del Cerrejón S.A to create Carbones del Cerrejón LLC, Cerrejón."[5]

In June 2021, Glencore announced that it had reached an agreement to acquire BHP and Anglo American's 33.3% stakes in the Cerrejón mine.[1] In January 2022, Glencore completed the acquisition, assuming 100% control of the mine.[2]

Cerrejón has a resource base of about 5 billion tons, of which 2.1 billion tons are currently measured and indicated to be of export quality, according to the companies. Xstrata said it is one of the largest coal deposits in the world.[6]

Xstrata Coal states that the mine employs 8,400 people and has a "reserve base in excess of 900 million tonnes."[5]

In its 2014 Annual Report, BHP Billiton stated that total production in the 2013/2014 financial year was 36.9 million tonnes with the mining complex having a "a reserve life of 17 years."[7]

In February 2011 BHP Billiton's website stated that coal from Cerrejón was "exported largely to Europe, but also to the USA and South America."[4]

Total annual production figures for the Cerrejón mine over the past twelve years are as follows (with BHP Billiton's share in parentheses):

As the global price of thermal coal has plummeted since 2011, the reserve life of the mine - even before the P40 expansion has been fully commissioned - has been substantially truncated. In its 2011 annual report BHP Billiton stated that the mine had a reserve life of 23 years.[14]

In each of its three subsequent annual reports the company has dropped the reserve life by two years.[19][15][20]

In its 2014 annual report, BHP Billiton stated that Cerrejón had proved marketable coal reserves of 610 million tonnes with the coal having an ash content of 9.4%, 33.8% volatile matter, 0.6% sulfur. It states that the coal has an average energy content of 6180 kcal/kg.[20]

BHP Billiton's 2019 annual report states that its Colombian coal mining leases expire progressively between 2028 and 2034, and notes that no further production is scheduled at the Cerrejón mine beyond 2033.[11]

Environmentalists, activists and academics have documented several negative impacts of the Cerrejón mine on local communities and ecosystems, including forcible displacement of the Afro-descendant Tabaco people, water pollution, and damage to the traditional agricultural economy.[21]

In July 2020, UNDARK Magazine reported "conflict with the local community, arising from both the pollution as well as infrastructure decisions that, the Wayuu say, have favored Cerrejón’s water needs over their own." UNDARK's report noted that a "comprehensive environmental study by the Institute for Development and Peace Studies (Indepaz), a non-governmental organization based in Bogotá, for example, found high levels of heavy metal contamination in local soil and water samples, as well as high levels of airborne particulate matter around the area of Cerrejón." In response "Cerrejón officials called into question, among other things, the group’s testing methodologies and equipment."[22]

In September 2020, the United Nations Special Rapporteur for Human Rights and the Environment, David Boyd, called for the suspension of the mine “until it can be shown to be safe.”[23]

In January 2021, it was announced that BHP, Glencore and Anglo American would face an investigation over the mine's environmental and human rights impacts. Government officials from Australia, Ireland, Switzerland and the UK will be responsible for the investigation of the impacts of the mine under the terms of the OECD (Organization for Economic Co-operation and Development) Guidelines for Multinational Enterprises which requires member countries to investigate alleged breaches by companies based within their jurisdiction.[23] In conjunction with the announcement, environmental and human rights activists in Australia, Switzerland, Ireland and the UK filed simultaneous complaints with the OECD calling for closure of the Cerrejón mine. The complaints cited Cerrejón's forced displacement of Indigenous and Afro-Colombian communities, along with high rates of air and water pollution, cancer and metal intoxication affecting communities in the vicinity of the mine.[24]

In January 2022, the Swiss, Australian and UK National Central Points (NCPs) issued initial assessments confirming that the complaints deal with a credible issue and should progress.[25][26][27]

In May 2021 Cerrejón coal announced that it had suspended operations at the mine as the result of a railway blockade organized by former workers.[28] 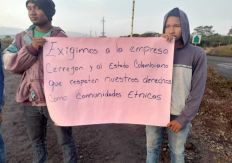 Activists hold a sign calling for the the Cerrejón company and Colombian government to respect their rights as ethnic communities. Source: Contagio Radio / Resumen Latinoamericano, September 2022.

In September 2022, the communities of Papayal, Manantialito, Barrancón, Vereda de Sierra Azul, Cocotazo, San Francisco, Tamaquito II, and other resettled communities organized to block the Cerrejón mine's southern operation, stating that the mining company had not complied with prior judgments and refused to work with the community on issues such as access to water, social investment, and jobs. As of September 6, peaceful roadblocks by indigenous activists had reduced Cerrejón's thermal coal production by 70%.[29][30]

Retrieved from "https://www.gem.wiki/w/index.php?title=Cerrejon_coal_mine&oldid=362675"
Categories:
This page was last edited on 3 November 2022, at 12:50.
Content is available under Creative Commons Attribution-NonCommercial-ShareAlike unless otherwise noted.
Privacy policy
About Global Energy Monitor
Disclaimers