The Coal-to-Liquids Coalition (CTLC), a U.S.-based front group created by the National Mining Association (NMA), states that its mission is to "articulate policies, educate policy makers and advocate congressional and administrative actions to advance the construction of state-of-the-art coal liquefaction facilities."[1] Coal liquefaction is a term used to a describe a portfolio of technologies that can be used to convert coal (a solid fuel) into more desirable liquid fuels, such as syngas and synfuel. Examples of such coal to liquid technologies include direct hydrogenation and gasification to liquids technologies.

While the coal industry is an obvious beneficiary of the technology, other industries that are heavy users of liquid hydrocarbon fuels are supportive of coal to liquids technologies due to the potential for cheaper liquid fuels should the cost of coal and conversion be less than the cost of liquid fuels made from petroleum.[citation needed]

The CTLC's website domain name -- http://www.futurecoalfuels.org -- was registered on May 5, 2006 by Mike Zabko from the NMA.[2] The domain registration lists the NMA as the registrant, administrative and technical contact for the site. Later that month, the NMA issued a media release announcing it was launching the website as a resource for reporters.[3]

In a profile of the NMA's 2007 lobbying efforts, Ted McKenna from PR Week noted that "the NMA aims to counter the effects of such opprobrium [from environmentalists - ed] through outreach, including direct lobbying of lawmakers; advertising in key DC titles like National Journal and Roll Call; ad and lobbying campaigns by the Coal-to-Liquids Coalition, which is backed by a number of labor unions, in addition to the NMA...". The profile also lists Corey Henry, the Coal-to-Liquids Coalition director of communications, as a member of the NMA's communications team.[4]

A 2008 story in Politico listed the Air Transport Association, the Association of American Railroads, Sasol, and Syntroeum as founders of CTLC.[5]

Wile the NMA had launched its website in May 2006, it wasn't until March 28 the following year that the coalition -- which uses the same website -- was formally launched at in Washington D.C. In a media release announcing the formation of the coalition, Kraig R. Naasz, the president and CEO of the NMA, stated that "It is imperative that this country act boldly and act now to strengthen our ability to serve the country’s energy needs."[6]

The CTLC release also stated that a dozen members of Congress were at the press conference to announce the launch, but did not list all of those in attendance. However, on its website, the CTLC features comments made at the launch by Congressmen Nick Rahall (Democrat-West Virginia) and Senator Jim Bunning (Republican - Kentucky)[7] and a supportive media release by U.S. Congressman Jerry Costello (Democrat-Illinois).[8] (Rahall, along with Geoff Davis (Republican-Kentucky), introduced proposed legislation, H.R. 370 bill known as the Coal-to-Liquids Fuel Promotion Act of 2007).

In his comments at the launch of the coalition, Rahall emphasized that "standing at the forefront of the coal-to-liquids effort is the Air Force. At 93% of total consumption, the Defense Department is the U.S. government's largest user of fuels. And of all four branches at DoD, the Air Force consumes the most, 52%". For his part, Bunning thanked the "National Mining Association and the Coal-to-Liquids Coalition for this event today." He also stated that "while I beleive tax incentives and the military will be the best ways to commercialize coal-to-liquid facilities in the United States, I am open to discussing other options with my colleagues, like price floors and the alternative fuel standard proposed by the President."[7]

On its website the CTLC states that "federal participation in the development of a robust CTL industry is critically important for two reasons. First, financial assistance on a limited scale will help to reassure private investors wary of undertaking major investments in energy technologies untried in the United States. Second, federal participation will discourage the foreign energy cartel from manipulating prices temporarily for the sole purpose of destroying a competing domestic fuel source."[9]

In particular, it states that it would support federal legislation that:

"* Grants the Department of Defense and other federal agencies the ability to enter into long-term, guaranteed fixed price contracts in order to discourage oil exporting countries from manipulating oil prices solely to block U.S. development of CTL fuels;

During 2007, the CTLC ran a series of print, online and radio advertisements "in major media outlets in Washington, D.C., and seven states" in an effort to "to educate policymakers, the press and the public" on the benefits of coal-to-liquids fuels.[10] The bulk of the advertisements try to position coal-to-liquids as the key to energy independence and emphasized the need for Congress to support the industry. 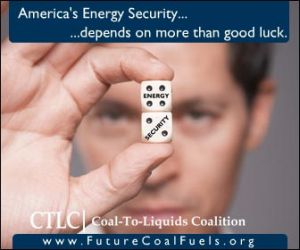 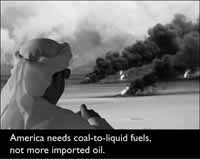 Part of the Pittsburgh Post-Gazette ad

Another in the Pittsburgh Post-Gazette featured the headline "America needs coal-to-liquid fuels, not more imported oil" beneath a large black and white image of a turbaned man looking at a burning oilfield. This advertisement was pointed: "Congress can jumpstart domestic CTL production with reasonable incentives. Or. it can crush CTL with unreasonable requirements."[12]

Another, in the Washington Post, was directly pitched at members of Congress. "American Air Power Needs American Clean Coal Fuels", it stated, with the subtitle that "America's defense requires our biggest energy resource". in the text of the advertisement, the coalition claimed that "The U.S. Air Force wants secure domestic coal-to-liquid fuel ... to end dependency on fuel from some of the world's most dangerous regions ... That's why Congress must give long-term fuel contracting authority to the Department of Defense."[13]

Another specifically took aim at environmental criticisms of the technology by the Natural Resources Defense Council (NRDC). "Coal-to-liquid fuels are clean: Don't be misled by NRDC", the headline of an advertisement placed in Roll Call, a Washington D.C. publication that tracks Capital Hill politics. The advertisement claimed that "clearly, NRDC didn't read the latest report from the Department of Energy's Idaho National Laboratory. CTL fuels are clean".[14]

While the bulk of the advertising budget was spent on inside the Beltway publications, a little was spent on radio advertisements in the major coal states of Montana and North Dakota. The radio advertisements not only touted the coalition's themes of energy and security but encouraged listeners to call specific members of Congress to support the industry. "Montana's Senators Baucas and Tester need to hear from you that America wants coal-to-liquid fuels made from abundant U.S. Coal," the Montana advertisement stated.[15] Across in North Dakota, the coalition ran an identical advertisement, though singling out Senators Kent Conrad and Byron L. Dorgan as the lobbying targets.[16]

To cap their advertising off, the coalition also produced a bumper sticker: "I'm pumped for coal to liquid fuels".

On January 20, 2009, the Air Force Times reported that the Air Force had reached a decision on the Malmstrom plant and would announce it on January 16. [17] On January 29, 2009, Air Force officials announced that they had rejected construction proposals and would no longer be pursuing development of the large synthetic fuel plant.[18]

On October 21, 2009, the Air Force announced it was no longer pursuing plans to build coal-to-liquids fuel plants as a means of producing alternative jet fuels. Under the Bush administration, the Air Force - which makes up 10 percent of U.S. jet fuel demand - had been pushing to drive the development of a domestic CTL market.[19]

Airlines, however, are looking into synfuel. In December 2009, Rentech announced that several large airline companies including American, US Airways, Delta, and Lufthansa had signed a memorandum of understanding to buy 500,000 barrels per month of jet fuel from the company's proposed synfuel plant, Belwood Coal-to-Liquids. Rentech said that it would capture a portion of the carbon dioxide produced by the plant and pipe it to Texas for enhanced oil recovery. The company also said that the plant is designed to burn biomass as well as coal.[20]

The CTLC lists its "coalition participants" as being[1]:

Retrieved from "https://www.gem.wiki/w/index.php?title=Coal-to-Liquids_Coalition&oldid=239960"
Categories:
This page was last edited on 30 April 2021, at 11:23.
Content is available under Creative Commons Attribution-NonCommercial-ShareAlike unless otherwise noted.
Privacy policy
About Global Energy Monitor
Disclaimers