Coal-to-Liquids (CTL) is a process of converting coal to fuels such as diesel or gas. For diesel, the process involves first building a plant to convert coal to gas and then another plant to covert the gas to a liquid. The resultant liquid fuel is known as synthetic fuel or synfuel. Synfuels are used as an alternative to oil, and can be used to make petroleum and diesel, as well as synthetic waxes, lubricants, chemical feedstocks, and alternative liquid fuels such as methanol and dimethyl ether (DME).[1] The process of producing synfuels can also be referred to as Gas-To-Liquids (GTL) or Biomass-To-Liquids (BTL), depending on the initial feedstock. The best known synthesis process is the Fischer-Tropsch synthesis which was used on a large scale in Germany during World War II, as Germany was cut off from oil imports.[2]

Syngas (from synthesis gas [SNG]) is the name given to a gas mixture that contains varying amounts of carbon monoxide and hydrogen, and very often some carbon dioxide, to use for energy. Examples of production methods include the gasification of coal, as well as steam reforming of natural gas or liquid hydrocarbons to produce hydrogen, biomass, and in some types of waste-to-energy gasification facilities. It typically has less than half the energy density of natural gas.[3]

Coal gasification involves the conversion of coal into electricity, hydrogen, and other energy products. Gasification is a thermo-chemical process that breaks down coal - or virtually any carbon-based source - into its basic chemical constituents. In a modern gasifier, coal is typically exposed to steam and carefully controlled amounts of air or oxygen under high temperatures and pressures. Under these conditions, molecules in coal break apart, initiating chemical reactions that produce a mixture of carbon monoxide, hydrogen, and other gaseous compounds such as carbon dioxide.[4]

The leading company in the commercialization of synthetic fuel is Sasol, a company based in South Africa. Sasol currently operates the world's only commercial coal-to-liquids facility at Secunda, with a capacity of 150,000 barrels a day. Currently around 30% of the country’s gasoline and diesel needs are produced from indigenous coal.[1] Other companies that have developed coal- or gas-to-liquids processes (at the pilot plant or commercial stage) include Shell, Exxon, Statoil, Rentech, and Syntroleum. Worldwide commercial gas-to-liquids plant capacity is 60,000 barrels per day, including plants in South Africa (Mossgas), Malaysia (Shell Bintulu) and New Zealand (Motor-fuel production at the New Zealand Synfuel site has been shut down since the mid nineties, although production of methanol for export continues. This site ran on the Mobil process converting gas to methanol and methanol to gasoline).[5]

Shell is one global oil company that has invested substantially in CTL technology and has developed plants in China, Malaysia and the Netherlands. In July 2008, the Executive Director of Gas and Power for Shell, Linda Cook, told the Australian Financial Review that while the company had proven the technology works, the economic viability of such projects is not guaranteed. "What's not proven is more on the commercial side and whether you can afford to do those two technologies back to back and have it economically attractive," she said.[6]

"You have to build a coal gasification plant and a gas-to-liquids plant, so [it's] very capital intensive. It would work economically in a place where you have low construction costs, where you are relatively close to market, and where you have a lot of low-cost coal reserves. So you can see maybe Australia has some of those ingredients ... On top of being capital intensive, it is also CO2 intensive and I think in today's environment one has to figure into the development of a coal-to-liquids project a means to offset the CO2 emissions associated with it," she said.[6]

In August 2010 Montana Senators Max Baucus and Jon Tester secured $25 million in funding for a Coal-and-Biomass-to-Liquids pilot project for Montana that will be operated by Accelergy Corporation. The coal that is to be used for the project is owned by the Crow Tribe. A press release on the matter stated that approximately 250 jobs would be created.[7]

On December 10, 2010, the National Wildlife Federation learned the Senate version of tax legislation includes subsidies for liquid coal fuels. Section 704 of the Senate tax bill as written would extend the Alternative Fuel Tax Credit to liquid coal, giving a 50-cent tax credit for each gallon of liquid coal sold or used in a fuel mixture. The provision could cost taxpayers an estimated $400 million per plant, every year.[8]

Liquid coal production emits about twice as much global warming pollution as gasoline and requires at least four gallons of water per gallon of fuel produced.[8] 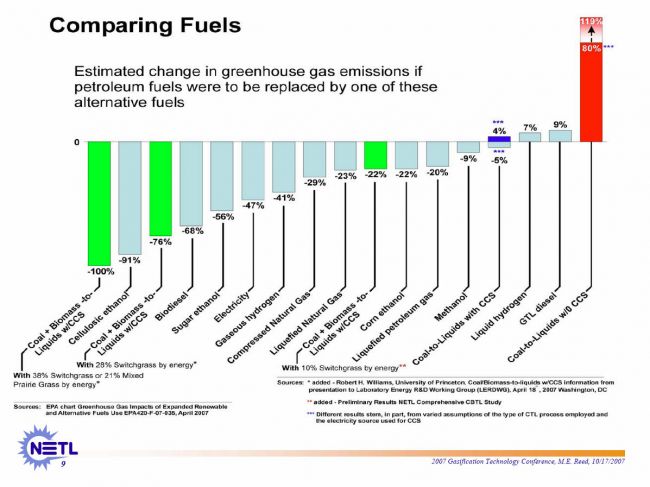 A study released in October 2008 found that if the United States tried relying on gasoline made from domestic coal as a means of achieving independence from foreign oil, the result would likely be an increase in carbon emissions. The researchers concluded that greenhouse gas emissions could actually almost double if natural gas or domestic coal were to replace foreign oil. Even if all potential means of reducing emissions were used, including any future development of carbon capture and storage technologies, the alternative fuels would not provide any reduction in greenhouse gas emissions.[9]

Accelergy in Houston, Texas, says it has come up with a way to convert coal into jet fuel. The company will initially try to sell fuel to the U.S. military -- the Air Force has already begun initial testing -- and has also started to field inquiries from China and some commercial aircraft and engine manufacturers. According to the company, biomass can also be substituted for coal in the recipe, depending on the desired characteristics of the final fuel. The Department of Defense will likely set its standards for synthetic jet fuels in 2013, and CEO Tim Vail claims that Accelergy's fuel will be able to meet those standards. The process was developed at ExxonMobil in the mid-1990s, and turns coal or plant matter directly into a liquid, skipping the synthetic gas stage.[10]

In April 2011, Accelergy received a $1.3 million grant from the Commonwealth of Pennsylvania to move forward on the construction of a facility for coal-biomass-to-liquids (CBTL) at a U-PARC facility in Pittsburgh. The grant is for Accelergy and its partners to test their process for converting coal to liquids, and inform plans for commercial-scale facilities in the state. The facility will produce and test several types of non-petroleum fuel, including gasoline, diesel and jet fuel, and feature a carbon dioxide capture and recycle process utilizing algae to convert the carbon dioxide into liquid fuels and a bio-fertilizer. Earlier, Accelergy was awarded a $175,000 grant to conduct a feasibility study and determine the facility's location.[11]

Synfuels touted as solution for US oil dependency

In Sep. 2010, conservative David Frum's website Frumforum argued that the U.S. government should secure "short-term control over energy independence policy" to finance up to 100 synfuels coal plants to rid the country of overseas oil dependency.[12]

In March 2011, during rising oil prices and uprisings in the Middle East, Sen. Joe Manchin (D-W.Va.) said he believed coal-to-liquids technology could play a key part in addressing the nation’s energy needs, as it "will not only move us toward energy independence, but will also create jobs and boost our economy in West Virginia.”[13]

It was announced in late November 2010 that Shenhua Group, China’s sole producer of liquid fuels from coal, may more than quadruple its output to 3 million metric tons annually by 2015 compared with 2010 to help meet demand from the country's growing economy.[14]

Coal-to-Liquids and Coal Gasification Projects in the U.S.

Retrieved from "https://www.gem.wiki/w/index.php?title=Coal-to-Liquids&oldid=229936"
Categories:
This page was last edited on 29 April 2021, at 20:36.
Content is available under Creative Commons Attribution-NonCommercial-ShareAlike unless otherwise noted.
Privacy policy
About Global Energy Monitor
Disclaimers