In August 2020 the Bangladesh Ministry of Power, Energy and Mineral Resources wrote to Prime Minister Sheikh Hasina requesting approval to switch 13 approved coal projects to operate on liquefied natural gas. A government official said the coal projects had struggled to gain finance as global banks have retreated from funding coal projects. Three coal plants with a combined capacity of 3840 MW are currently under construction. A further two proposed privately owned coal plants, with a combined capacity of 1531 MW, are struggling to attract finance. Bangladesh currently imports 1000 mmcf (million cubic feet) of LNG per day through two floating storage units and is planning to increase import capacity to 2,000 mmcf of LNG per day by 2030. Five LNG-based projects with a capacity of 8,750 megawatts of electricity are in the pipeline.[2]

Mohammad Hossain, director general of the research body attached to Bangladesh's power, energy and mineral resources ministry, also described to China Dialogue that “Bangladesh could be set for a paradigm shift away from coal” toward the “true alternative” of imported liquified natural gas (LNG). Hossain confirmed comments from Nasrul Hamid, Bangladesh’s minister of power, energy and mineral resources, that 26 out of 29 power plants in Bangladesh's coal power pipeline “are now going through [sic] reviewing process” to find less expensive alternatives. The 26 plants under review account for 28 GW of capacity, or 90% of the coal power pipeline.[3]

In the EU from 2007-2019, coal-fired power generation fell by half, with gas generation unchanged.[1] A September 2020 study by CAN Europe and Ember, based on analysis of the final National Energy and Climate Plans (NECPs)[6] of 18 EU member states that are still using coal for electricity generation, found that seven member states are on track to phase-out coal by 2030 without a 'significant increase' in fossil gas: Denmark, Finland, France, the Netherlands, Portugal, Slovakia and Spain.[7]

The study estimates for Bulgaria, Croatia, Czechia, Poland, Romania and Slovenia, ie countries not expected to phase-out coal by 2030, that 43% of all expected declines in coal generation by 2030 versus the baseline (average 2016-2018) levels will be offset by increased gas-fired electricity generation. The study looked at selected member states:

A limited reduction in electricity generation from coal to 2030 will be more than offset by increased electricity generation from gas. By 2035, nearly half (46%) of all coal declines versus the baseline (average of 2016-2018) are expected to be offset by increased gas use. Bulgaria's NECP foresees a reduction in gas burn between 2035 and 2040. This is to be primarily achieved by the construction of a new 2GW nuclear power plant, although there is a high risk that this new nuclear power plant will fail to materialise on time or at all.

While the current coal phase-out trajectory is not compatible with the obligations of the Paris Agreement, significant reductions in coal generation and coal capacity are expected by 2030. Germany's NECP indicates that higher gas burn is envisaged versus recent levels right through to 2040. However, the volumes are relatively small versus the overall reductions in electricity generation from coal and the authors state that it is difficult to disentangle these increases in gas from the impact of Germany’s nuclear phase-out.

According to Greece's NECP, new gas plants are to replace part of the output of lignite-fired plants and provide the system with the flexibility required by an increased share of renewable energy plants. The NECP envisages an additional 1.7GW of gas capacity will be installed between 2020 and 2030. However, there is no split provided between combined cycle gas turbine (CCGT) plants and other gas capacity. Global Energy Monitor's 'Europe Gas Tracker' identifies 3.5GW of proposed CCGT capacity.[8]

Ireland's NECP expects that both coal and peat will be phased-out from the Irish electricity system by 2025, and "while this will have a positive impact [...] it will lead to an increased reliance on natural gas." The NECP envisages that net gas capacity will increase by ~0.5GW between 2020 and 2030, with a further net capacity increase of ~2.4GW in the 2030s. No split is provided between CCGT and other gas capacity.

A combination of low gas prices and robust carbon prices has already accelerated the coal-to-gas transition in Italy beyond what the NECP outlines. In 2019, electricity generation had switched from coal to gas in volumes not originally foreseen until 2022.[9]

According to Italy's NECP, "New gas capacity for around 3GW [will be launched in the period 2020-2025], of which around 50% is substantially linked to the phase-out [of coal], in line with regional planning and regulations". According to Global Energy Monitor calculations, covering 'proposed' projects which have appeared in corporate or government plans in either pre-permit or permitted stages, approximately 6GW of new CCGT capacity is proposed in Italy, the majority of which (4.2GW) is direct coal-to-gas power station conversions by Enel. Two projects by Edison make up the remaining proposed capacity. The new gas capacity will be eligible for public subsidy via Italy’s capacity mechanism.[8]

Poland's NECP foresees electricity generation from gas to rise to almost four times the baseline (average 2016-2018) by 2040. Nearly half (42%) of the expected reductions in electricity generation from coal by 2040 will be offset by increased gas burn. The addition of ~6GW of new gas capacity is expected in the 2020-2040 period, with only a small amount (0.35GW) reserved for meeting peak loads. Accordingly, approximately 4.6GW of new CCGT capacity is either proposed or already under construction. PGE, a state-owned public power company, is currently the largest developer with over 2.2GW of proposed gas capacity. While the pipeline of gas projects continues to grow (and recent projects have been awarded generous 17 year capacity payments contracts), at the same time the country has fallen off track on its 2020 renewable energy target and will not reach it in time.

Major investments in gas supply and transmission infrastructure are thus set out in the NECP: “[Diversification of energy supplies] will be achieved through investments in the Baltic Pipe Project, increasing the capacity of the Świnoujście Polskie LNG Terminal, building a floating terminal in the Gulf of Gdańsk, and building / expanding [gas] connections with Slovakia and Lithuania. Investments in the [gas] connections with the Czech Republic and Ukraine are also possible.”

All electricity transition data from the NECPs (including the coal and gas figures from the EU member states assessed as not undergoing a significant coal-to-gas transition) will be made available on the Ember website as part of a forthcoming publication due in late 2020. Ember published 'Vision or Division? What do National Energy and Climate Plans tell us about the EU power sector in 2030?' on November 9, 2020.[10] The report shows the seven member state countries that are blocking Europe’s electricity transition. Together they will be responsible for 80% of the EU’s power sector emissions by 2030 due to their reliance on coal and fossil gas and insufficient deployment of zero-carbon electricity. 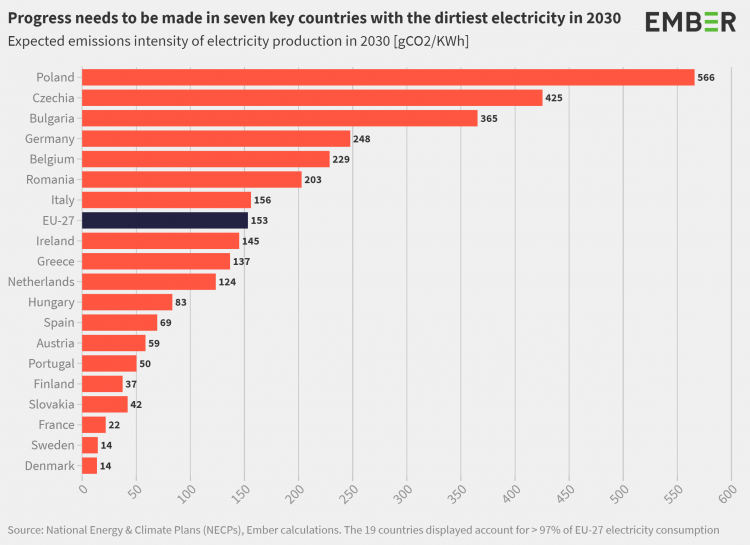 Ember produced factsheets with analysis of where the seven problematic countries are going wrong, based on individual National Energy and Climate Plans which set out how each country expects to generate its electricity by 2030 as the EU moves towards net zero emissions by 2050: Belgium[11], Bulgaria[12], Czechia[13], Germany[14], Italy[15], Poland[16], Romania[17].

South Korea plans to shut a total of 15.3GW of coal-fired capacity by 2034, according to a draft of the country's ninth basic electricity plan, of which 12.7GW will be switched to run on imported gas.[21]

The following power stations have plans to convert from coal to gas:[21]

In October 2019 Myanmar’s Ministry of Energy announced five new emergency power projects fueled by fossil gas. Three plants totaling 900 MW will use imported LNG, and a fourth of 20.54 MW will use gas supplied by the government. A fifth plant of 151.54 MW will be built by a Chinese consortium led by China Energy Engineering Corp. The source of gas for the fifth plant is unspecified. The fast-track approvals are intended to show action ahead of the 2020 elections with the aim of quelling public disquiet over blackouts and power price increases.[22] As of July 2020, Myanmar had only 160 MW of coal-fired generating capacity, having canceled 18,465 MW of projects and put an additional 2,760 MW of proposed projects on hold.[23]

Retrieved from "https://www.gem.wiki/w/index.php?title=Coal_Versus_Gas_in_National_Power_Plans&oldid=214364"
This page was last edited on 9 November 2020, at 11:36.
Content is available under Creative Commons Attribution-NonCommercial-ShareAlike unless otherwise noted.
Privacy policy
About Global Energy Monitor
Disclaimers