The map below shows the approximate location of the complex.[3]

The Wolvekrans-Middelburg mine was commissioned in 1982.[4]

The mine is comprised of two open-cut mines, Middelburg North and Middelburg South, which are located approximately 20 kilometres south of Middelburg in Mpumalanga Province and produces what the company describes as "a medium rank bituminous thermal coal, most of which can be beneficiated for the European or Asian export market."

For many years, Middelburg was majority owned by BHP Billiton Energy Coal South Africa, a subsidiary of BHP Billiton. BHP Biliton owned 84% of the Middelburg mine in a joint venture with the remaining 16% owned by Xstrata via Tavistock Collieries Plc.[4] In an October 2007 conference presentation, BHP Billiton included a map of the proposed mining area for the Douglas-Middelburg area. 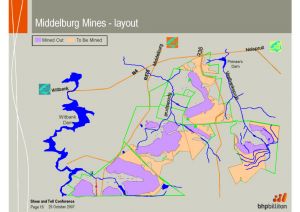 The presentation also stated that in an average year the Middelburg mine:[5]

In its 2009 annual report BHP Billiton states that "BECSA and Tavistock are the joint holders of three Old Order Mining Rights in the joint venture ratio (84:16) and BECSA is the 100% holder of a fourth Old Order Mining Right. All four Old Order Rights were lodged for conversion in December 2008. BECSA and Tavistock have amended their joint venture agreement such that, upon conversion of the four Old Order Mining Rights, the mining area will be divided into an area wholly-owned and operated by Tavistock and an area wholly-owned and operated by BECSA as the new Middelburg mine. A number of regulatory approvals are being sought to give effect to this restructure."[4]

On its website in 2010, BHP Billiton stated that "Middelburg Mine Services is the largest producer in the BHP Billiton Energy Coal South Africa group ... The principal products are power station grade coal for Eskom’s nearby Duvha power station and higher quality export grade products for the seaborne steam coal markets."[6] Export coal is transported to the Richards Bay Coal Terminal while coal for the Duvha Power Station is delivered by a conveyor belt.[4] The Douglas-Middelburg Optimisation Project is a mine rationalisation project being undertaken by BHP Billiton Energy Coal South Africa.

"this project involves works to optimise the development of existing reserves across the Douglas and Middelburg collieries, the development of additional mining areas and the construction of a new 14 million tonnes per annum coal processing plant, which will replace the less efficient existing plant at Douglas. The work will enable us to maintain energy coal exports from the combined Douglas and Middelburg colliery at around current levels (approximately 10 million tonnes per annum) while also fulfilling our domestic contractual commitments. The expected capital investment is US$975 million and the new plant is scheduled to receive its first coal in mid CY2010."[7]

In an April 2010 report on its exploration and development projects, BHP Billiton stated that the optimisation project was "on schedule and budget. The overall project is 96% complete."[8]

BHP Billiton spun out Middelburg mine as part of the Wolvekrans-Middelburg Complex into South Africa Energy Coal (SAEC), owned by parent company South32 Ltd, in 2015, explaining that

"The current configuration of the WMC is the result of a series of mergers and the acquisition of various separate collieries (Albion, Vandykesdrift, Boschmanskrans, Driefontein, Steenkoolspruit, Douglas, Wolvekrans, Goedehoop, Hartebeestfontein and Klipfontein) over an extended history. This has involved multiple changes of ownership including holdings by Witbank Collieries Limited, TC Lands, Anglo-Transvaal Collieries, Barlow Rand Group, Rand Mines/Randcoal, Shell, BP, JCI, Gencor, ICC, Ingwe, Billiton International and BHP Billiton. SAEC currently owns a 100 per cent interest and operates the WMC."[9][10]

A social impact assessment published in July 2015 as part of South32's acquisition recommended the Klipfontein extension of the Wolvekrans-Middelburg Complex proceed.[11]

In August 2019, news reports indicated that South32 was in the process of selling the Wolvekrans-Middelburg Complex to Seriti Resources, an African mining company, for between $300 million to $350 million.[12] In June 2021, South32 completed the sale of its shareholding in SAEC to Seriti Resources. The discontinued operation represents the entire SAEC operating segment which included the former Wolvekrans Middelburg Complex (which consisted of the Ifalethu and Wolvekrans collieries).[13]

Retrieved from "https://www.gem.wiki/w/index.php?title=Middelburg_Mining_Services_(MMS)_Coal_Mine&oldid=360528"
Categories:
This page was last edited on 7 October 2022, at 00:14.
Content is available under Creative Commons Attribution-NonCommercial-ShareAlike unless otherwise noted.
Privacy policy
About Global Energy Monitor
Disclaimers