The map below shows the location of the plant, near Dora Creek, New South Wales.

Eraring Power Station, owned by Eraring Energy, is one of two coal fired electricity power stations on the shores of Lake Macquarie, in New South Wales, Australia. It originally had four 660 MW steam driven turbine generators, with a total capacity of 2,640 MW of electricity. Along with the Bayswater Power Station in Muswellbrook, the Eraring station is Australia's largest emitter of carbon dioxide.[1]

Eraring Power Station burns 5.2 million tonnes of coal per year, provided by five local mines, and uses salt water from Lake Macquarie for cooling. [2] The company also states that approximately half the fly ash is "sold for use in the manufacture of concrete and building products and in road base" with the ash handling plant collecting furnace ash "and economiser grits and conveys them as slurry to the ash disposal area."[3] 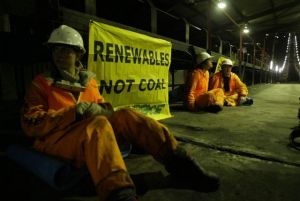 At dawn on July 3, 2008, 27 Greenpeace activists entered the Eraring Power Station site to call for an energy revolution take direct action to stop coal from being burnt. Twelve protesters shut down and chained themselves to conveyors while others climbed onto the roof to paint 'Revolution' and unfurled a banner reading 'Energy Revolution - Renewables Not Coal'. The action preceeded the Australian government's climate change advisor Professor Ross Garnaut's delivery of his Draft Climate Change Review on July 4. Police arrested 27.[5].

A September 2017 study by Environmental Justice Australia criticized Eraring's long-standing exemption from the national nitrogen oxide emission standard of 1,500 mg per cubic metre. The study also criticized the absence of air pollution monitoring within 25 km of Eraring and the nearby Vales Point power station. “Hundreds of thousands of people living near Australia’s largest power station do not know what they are breathing," the report states.[6]

In October 2018 Origin Energy obtained approval from the EPA to expand the plant's ash pit, which is located above the abandoned Awaba Colliery, creating a danger of surface water flowing from the ash dam into the mine workings and eventually into nearby tributaries of Dora Creek.[7] In March 2020 Origin was fined A$15,000 for excessive emissions from the ash dam, its third such penalty in three years.[8]

In December 2017, Origin Energy announced that it would close the plant by 2032 as part of a plan to reduce its carbon emissions by 50% by that date.[9] Environmentalists criticized the move as insufficient, and noted that the closure date marked the end of the plant's 50-year life cycle anyway. "Given that Eraring makes up approximately 70 per cent of Origin’s overall emissions, the company is committing to increase its carbon pollution across the rest of the portfolio," noted energy analyst Dan Goucher.[9]

In February 2020, it was reported that Origin Energy was considering a "range of scenarios" which could result in the plant's closure earlier than 2032.[10]

In February 2022, the company announced the plant was set to close by August 2025, seven years earlier than planned. Origin Energy said the plant was unable to compete with the “influx of renewables”, the Financial Times reported, quoting the firm’s chief executive saying: “The economics of coal-fired power stations are being put under increasing, unsustainable pressure by cleaner and lower cost generation, including solar, wind and batteries.” The announcement came ahead of Origin’s half-year results, which showed a further deterioration of profits generated by the Eraring plant. Gross profits from Origin’s electricity business fell to $222 million for the half-year ending December 2021, down from $503 million in the same period ending December 2020.[12][13][14]

In August 2019 tests were being conducted by Star Scientific to determine if the plant could be converted to run on a Hydrogen-based system utilising a so-called Hydrogen Energy Release Optimiser, or HERO, catalyst technology.[15]

In September 2022, Origin stated that the power station's site had unsuitable terrain for a solar or wind conversion after the coal plant's closure. The company proposed instead that a 700 MW battery, among the biggest in the world, could be built.[16]

Retrieved from "https://www.gem.wiki/w/index.php?title=Eraring_Power_Station&oldid=363214"
Categories:
This page was last edited on 9 November 2022, at 18:34.
Content is available under Creative Commons Attribution-NonCommercial-ShareAlike unless otherwise noted.
Privacy policy
About Global Energy Monitor
Disclaimers