The undated satellite photo below shows the old plant site to the southwest and the new "Red Dragon" unit to the northeast, near Mejillones, Antofagasta, Chile.

Coal for the plant arrives via the Port of Mejillones.

Units 4 and 5, each 375 MW, also known respectively as IEM1 and IEM2 or collectively as the Red Dragon expansion project, received environmental approval in 2010.[5] In May 2012, E-CL sold 30% of the project to Chile-based Luksic Group and was reportedly looking for a second business partner to buy a 30% share, which would leave E-CL with a 40% stake.[6] To make construction of the plant viable, E-CL sought to sign an energy contract with one of northern Chile's large mining companies. However, as of July 2013, E-CL's General Manager Lodewijk Verdeyen acknowledged that no deal had been reached, effectively postponing construction of the plant indefinitely.[7][8]

E-CL continued to hold out hopes that a proposed new transmission line linking Chile's two major power grids (northern Chile's SING grid and central Chile's SIC grid) might help E-CL find customers for the plant's electricity further afield, in Chile's Atacama region. In December 2014, EC-L won a 15-year contract to supply 5,040 GWh of electricity annually to central Chile's SIC grid via the new transmission line, and the Mejillones power plant was mentioned as a potential energy supplier for the grid. However, the total size of the IEM expansion was reported as only 375 MW, implying the expansion's second unit (Unit 5) might be deferred.[9]

In January 2015, Chilean energy minister Máximo Pacheco announced that the connector line, to be constructed by EC-L, would be ready by 2017[10][11], and the Chilean business news site La Tercera Negocios cited 2018 as the anticipated completion date for Infraestructura Energética's Unit 1.[12]

Doosan Škoda Power was chosen to supply the 375-MW steam turbine for the power plant, with South Korea’s SK Engineering & Construction providing EPC support.[13] Along with the 375 MW IEM1 power station, Engie's plans called for construction of a port designed to receive more than 6 million tons of coal and limestone a year. The total investment for the plant and port was estimated at US$1.1 billion.[14]

In October 2016, the Chilean business news site Pulso reported that Engie had put IEM2 up for sale in early 2016 and was also looking to sell its interests in the port project. Axel Leveque, CEO of Engie Energia Chile, was quoted as saying that Engie would not pursue further development of IEM2 due to the company's shifting focus towards renewable energy, but that he expected a buyer for IEM2 to eventually step forward, as the site, permits and engineering plans for the second unit are already in place.[18] However, given the fact that IEM2 is not mentioned in the comprehensive June 2019 plan for Chilean coal-fired plants put forward by President Sebastián Piñera and the Chilean Ministry of Energy, it appears that IEM2 has been definitively cancelled.[1] 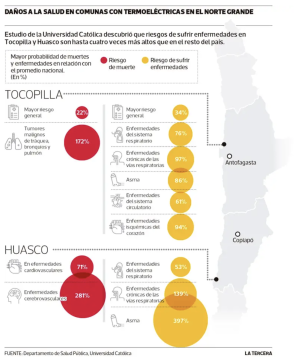 Mejillones Unit 4 (IEM1) is the largest coal-fired plant in Chile, consuming 228 tons of coal per hour and immense quantities of water. Environmental groups note that despite Engie's much-touted June 2019 retirement of two units at the nearby Tocopilla power station, the commissioning of Mejillones Unit 4 actually represents a significant increase in Engie's coal-fired electricity production in the Antofagasta region, which according to a 2019 study by Universidad Católica and Chile Sustentable suffers some of the nation’s highest rates of lung cancer, asthma, and other respiratory illnesses.[25][26]

In July 2020, a coalition including the environmental NGO FIMA and the Mejillones Association of Tourist Service Providers petitioned Chile's Comptroller General's office to rule on the legality of continued operations by Engie's Mejillones Units 1 and 2. The complainants maintain that the older Mejillones units, which pre-date the enactment of Chile's Environmental Impact Assessment System, are operating without necessary safeguards and thereby causing damage to the environment and the health of local residents.[27]

In June 2019, Chilean president Sebastián Piñera announced a plan drafted by the Chilean Ministry of Energy calling for the decommissioning of all Chilean coal-fired plants by 2040.[28]

In December 2019 Engie announced that it would retire Unit 1 and Unit 2 by the end of 2024 instead of the previously planned date of 2040.[2] The exact retirement date for Unit 4 (IEM1) remains uncertain, but plant owner Engie has agreed to consult with the government every five years to renew details of the plan, taking into account management and shareholder input, Engie's legal obligations to meet environmental targets and supply contracted levels of power, and other criteria.[1]

Retrieved from "https://www.gem.wiki/w/index.php?title=Mejillones_power_station&oldid=278834"
Categories:
This page was last edited on 9 December 2021, at 18:56.
Content is available under Creative Commons Attribution-NonCommercial-ShareAlike unless otherwise noted.
Privacy policy
About Global Energy Monitor
Disclaimers