"Making this decision has been especially difficult given the strong support we have received for the project in the local community," said Robert Colozza, vice president for LS Power.[3] Joy Buchanan, local spokesperson for LS, said it's unlikely LS will try again in Midland.

"It would be very hard[4] to come back," she said. "You can't just come back in. You have to get your permits again, you would have to go through the zoning process (again) with the city."

The plant was to be sited adjacent to Dow Chemical's Midland plant, the world headquarters of the chemical giant, and near Dow Corning, a Dow Subsidiary.[2] 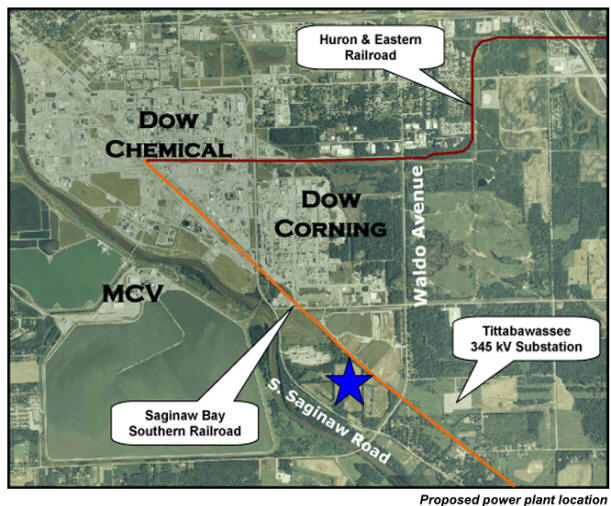 The Midland plant was included in a Sierra Club campaign to urge Dynegy and LS Power to abandon proposed coal-fired plants in six states and instead focus on cleaner energy projects.[5][7]

In July 2008, Mid-Michigan turned in its revised MACT determinations to the Michigan DEQ after its first draft was rejected.

Midland Resident Peter Sinclair, an outspoken critic of the plant proposal, and a local Climate Change activist, reacted to the cancellation in a letter to local papers.[8]

The recent demise of the LS Power coal project in Midland has been blamed on citizens raising reasonable concerns about the plant. The facts show this is incorrect. The plant was obviously proposed with the idea that Dow, Dow Corning, or Hemlock Semiconductor would be customers. In fact, all three companies analyzed the economics of this plant, and all decided it was not in their best interest. Unable to attract customers, the project failed.

Governor Granholm’s recent energy initiative[9] is also blamed for the Plant’s demise. But remember, LS’ partner, Dynegy, obviously surveyed the landscape carefully, and quit the project[10] a month before the Governor delivered her new proposal. (smart money showed what it thought of coal - by raising Dynegy stock 19%[11] the day after its move)

So, if coal is not economical for Dow Chemical, yet we are told that a nearly identical Consumer's Energy plant, in Bay City, would somehow make sense for ratepayers? Coal is unnecessary, expensive, and a dying industry. Pursuing it will mire Michigan in the past.

The Wall Street Journal recently reported[12] that electric demand is dropping all over the US, and not just due to the recession, but to permanent changes in technology, efficiency, and electric use. This is true here in Michigan, as Consumer Energy and DTE’s latest demand forecasts show a drop coming over the next 10 years.[13]

Instead of building an expensive new coal plant that may not be needed, why not use resources we already have? Michigan CoGeneration Venture, (MCV) in Midland, is a 1500 Megawatt gas turbine power plant, almost as large as both the proposed LS and Consumer’s plants, combined - with plenty of room for expansion. It is one of several large gas turbine plants in the state, available to produce reliable base-load power, if needed.

MCV and the others have been underutilized over the past decade, due to the high price of natural gas. Due to new discoveries, gas prices are currently dropping, and are predicted to remain low. Buying power, if necessary, from MCV, instead of raising rates for new construction, means ratepayers could be shielded from high costs of unnecessary construction. Since gas produces only a little more than half the CO2 of coal, costs will be lower to meet regulations that will eventually be applied to all carbon fuels. Meanwhile, the world has begun an energy revolution that Michigan has the potential to lead. Michigan’s offshore wind potential equals 10 times our current capacity. We have the manufacturing base, transportation, and work force to immediately become a strong player in an industry that created 17 billion dollars in economic activity, 35,000 new jobs last year, and is growing at a 50% annual rate. The common objection, “What do you do when the wind stops blowing?”, is baseless. Wind energy can be stored in the Ludington Pumped Storage power plant, and available when the wind stops blowing. As we upgrade our electrical grid over the country, a web of interconnecting wind sites will insure that power is constantly available from wind that is always blowing, somewhere. Michigan also has huge geological storage capacity, that could be used to store renewable energy when it is not needed, as compressed air.

States, and countries, that learn to power themselves with unlimited free energy will be winners in the new century.

During the crisis of World War II, the nation turned to this state to become the arsenal of democracy, and provide the hardware that saved the world from tyranny. Now, a new, even more critical turning point is upon us. It is time for Michigan to lead the world again.

Midland has a history of stormy controversy in regard to power plants. In the 1970s, Midland was the intended site of a large nuclear power project. Citizen's groups raised a legal challenge to the plant, and poor construction practices caused delays and price increases.[14] The project was abandoned in the 1980's, in favor of a gas turbine generator, which operates today as Midland Cogeneration Venture (MCV).[15]

The battle split the community, and many conservatives still feel bitterness over the plant's cancellation, blaming radical environmentalists for the fiasco. The controversy garnered international attention, as local activist Mary Sinclair was featured in the Wall Street Journal, and profiled on the 60 Minutes program.[16] One of the high profile organizers of demonstrations against the plant was a young Micheal Moore, then editor of an alternative newspaper, the Flint Voice.[17]

In December 2008, Dynegy CEO Bruce Williamson announced that the company was reevaluating its role in developing new power plants, including Midland. Williamson cited the tightening credit markets and difficulty in permitted new coal plants as reasons for reconsidering its involvement in the siting, permitting, financing and construction of several new projects. Other plants include the Longleaf plant in Georgia, LS Power Elk Run Energy Station in Iowa, Plum Point Energy Station in Arkansas, Sandy Creek Plant in Texas, West Deptford Project in New Jersey, and White Pine Energy Station in Nevada. As an alternative, the company will look at adding generation to its existing sites in the Northeast, Midwest and Western U.S.[19]

Then, in a news release on January 1, 2009, Dynegy announced it was ending its partnership with LSPower in the Mid MIchigan Energy Project.[20]

Signs of trouble had been emerging for months between the partners, Dynegy, and LS Power. In August, 2008, Dynegy chairman Bruce Williamson, who has publicly supported government action on CO2, stated that [21]he expected a "lull" in new coal plant development.

On December 11, 2008, Reuters reported that in a phone call with investors, Williamson stated that in light of high costs and difficulty permitting, the company was "reconsidering" coal projects around the country, including the Mid-Michigan plant.[22] According to the news item, "Dynegy's reevaluation includes activity related to siting, permitting, financing and construction of at least six coal or natural gas projects.."

Reaction from the local communities and citizens was immediate.[23] MidlandCares,[24] the leading citizen's group questioning the plant, praised the Dynegy announcement.[25]

Officials of LS Power, Dynegy's partner in the project, expressed optimism that the project could still be completed.[26] "LS Power has a very long-term view on energy needs and energy generation, and it believes the Midland project is still very viable," a spokesman said. "They are continuing all development activities pertinent to this power plant.

Environmentalists were cautiously optimistic that this was further evidence the project may be collapsing. Bruce Nilles, director of the Sierra Club's national effort to block development of new coal-fired plants, [27]stated, "They've seen the writing on the wall ... It indicates that 2009 is going to be a very tough year for the coal industry".

Locally, LS Power official Joy Buchanan expressed continued confidence in the viability of the project. [28]"I don't consider this a setback at all," she continued. "We were not engaged at all in any day-to-day activities with Dynegy."

Janea Little[29] of the environmental group MidlandCARES called Dynegy's pullout "great news" but doesn't think it's necessarily the end of the project. "LS Power has made it pretty clear that if they have a customer base, they will be going ahead with the project," she said.

Retrieved from "https://www.gem.wiki/w/index.php?title=Midland_Power_Plant&oldid=240754"
Categories:
This page was last edited on 30 April 2021, at 11:24.
Content is available under Creative Commons Attribution-NonCommercial-ShareAlike unless otherwise noted.
Privacy policy
About Global Energy Monitor
Disclaimers