The map below shows Sompeta taluk, Srikakulam district, the approximate location where the plant would be built.

Nagarjuna Construction Company Sompeta Thermal Plant was a 2640 MW coal-fired power plant proposed for Sompeta in Andhra Pradesh, India by the Nagarjuna Construction Company (NCC Limited). In 2008, the NCC was allotted land for setting up the plant. In October 2009, environmentalists, farmers and fishermen from the affected mandals came together to form the Paryavarana Parirakshana Sangham (PPS) and held protests against the plants.[1]

In the wake of highly publicized protests and the killings of three local residents by police, the project's environmental clearance was revoked by the ministry of environment and forests in July, 2010.[2] A company spokesman said that the project was on hold, not cancelled.[3]

On January 18, 2011, Nagarjuna Construction Company announced that it had acquired a 55 per cent share in Chennai-based Nelcast Energy Corporation Ltd (NECL), which is developing a 1320 MW Muthukur Mandal power station (Painampuram) at Krishnapatnam in Nellore district of Andhra Pradesh.[4]

In December 2014 it was reported that the government was reportedly looking at Etcherla and Ponduru mandals to set up the power station, and that the "rail network in Ponduru is being seen as a major advantage for construction of thermal project in association with Japanese company."[5]

In late August 2015 the State Government cancelled the land allocation for the power station and directed that the company only use it for agricultural projects. In October 2015 the state government conceded to the protestors’ demands and assured only eco-friendly projects in the ‘Beela’ area. The cancellation follows an eight-year-long campaign – including an almost six-year-long relay hunger strike - by a coalition of fisherfolk, villagers and environmentalists against the plant.[1] 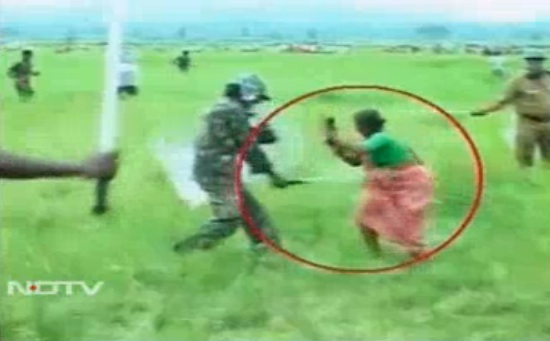 July 2010: Protesters beaten with lathis by riot police in Srikakulam 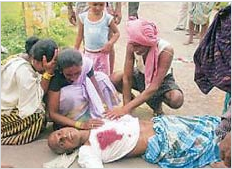 On July 14, 2010, police in Adhra Pradesh's Srikakulam district fired on farmers and fisherman protesting a 2,640 MW coal plant under construction by Nagarjuna Construction Company (NCC), killing two fishermen. In addition, 150 people were injured, including 45 policemen, during clashes between protesters and police. In the wake of the violence, police were deployed in about a dozen villages and banned assembly by more than five persons.[6]

Following graphic television reports on the protests, the project's environmental clearance was revoked by the ministry of environment and forests in July, 2010.[7]

"The firing was suddenly done from inside a police van on the Sompeta-Baruva road, on either side of which the fields are located. The police van started moving towards Sompeta, while the man inside continued firing from a close range. The bullets hit the victims above waist level, except two who were hit on the thigh and the ankle. Two persons--G. Joga Rao of Lakkavaram and Krishnamurthy of Plasapuram--died on the spot and five others, including a cameraman of a local television channel, sustained bullet injuries."

One blogger described the "crony capitalism" behind the project as follows:[9]

"[This project] is being developed by Nagarjuna Constructions and it has on its board of directors the esteemed presence of P. Abraham who served as Chairman of EAC (Hydroelectric) and who in the same position approved environmental clearances for various projects which he was himself promoting as a director. He also sits on the board of companies promoted by those who promote the Kakarapalli project. Some of the promoters are marquee names in the Telugu press by now, namely Karvy’s Mr MS Ramakrishna and Matrix Prasad. Mr. P. Abraham also graces the director position in GVK, Lanco group and half a dozen other groups. The world is indeed a small place now. You run into the same names every day. Long live crony capitalism."

This is a plea by residents of over 30 villages in Sompeta, Kaviti and Kanchili mandals of Srikakulam district, Andhra Pradesh seeking your immediate intervention to stop the proposed establishment of a 2640 MW coal based power plant by Nagarjuna Construction Company Limited (NCC). We make this appeal because if the thermal plant comes up it will devastate the lives of thousands of farmers and fisher-folk, in two towns and over 30 villages, as well as destroy an area which has significant ecological value.

The NCC thermal plant is proposed to be constructed in an extremely precious water-body known locally as “beela” abuts the sea and is close to the Eastern Ghats in Sompeta mandal. This wetland occupies over 4000 acres stretching from Baruva in Sompeta mandal to Kapaasuguddi in Kaviti mandal, a length of about 20 km. Of the 1882 acres (762 hectares) handed over to the NCC, the “beela” is of extent about 1200 acres.

This “beela” (“peddha beela”) is a low-lying swamp area with a unique habitat, serving as a rich biological wetland with high ecological importance. It is part of perhaps the last surviving marshy stretches in Andhra coast and they are an integral part of the surface-cum-marine ecosystem that supports a variety of flora and fauna apart from providing livelihood to thousands of families in the area. The “peddha beela” wetland is linked to two other wetlands -- the “china beela” and the “tampara” near idduvanipalem where it finally joins the sea. The thermal plant will surely destroy the bio-diversity of the swamp.

The whole area is abundantly fertile. The area around the proposed plant has a population of about 1.5 lakh consisting principally of agriculturists and fisher-folk. Significantly, water from the “beela” is the lifeline for a two-crop paddy in an extent of not less than 5000 acres in the area. Three lift irrigation schemes from the “beela” sanctioned by the present government are also functioning.

For many of the fisher-folk, belonging to Manikyapuram village of Kanchili mandal, the “beela” is the only source of livelihood as they do exclusively inland fishing. Fisher-folk from Kaviti mandal are also leased out fishing rights by the fisheries department every year. The kandra and agnikulakshatriya fisher-folk communities will have their livelihood robbed if their access to the “beela” is taken away.

It is largely because of the “beela” that the groundwater table in the region is healthy and there is no water crisis for either domestic or farm usage. It is preposterous on the part of revenue officials and project proponents to have described the area as “wasteland unsuitable for cultivation”!

The “beela” also serves as a huge grazing area for sheep and cattle. Apart from this, hundreds of families eke out a living making mats from the grass obtained in the “beela”. It is also used as roof-top material and animal fodder. The “beela” and the area surrounding it is also home to rare medicinal plants like “aswagandhi” and “sarpagandi” as well as the well-known “eclipta alpa” which is used extensively to treat jaundice.

We must mention here that vegetables grown in the area, particularly from villages like Benkili and Jinkibhadra in Sompeta mandal and Mandapalli in Kanchili mandal are well-known. In fact, a “best vegetables” award was handed over to people of these areas by the then prime minister Shri Jawaharlal Nehru in 1956. All these villages are within a radius of 500 metres to 3 km from the proposed thermal project site.

Moreover, the “beela” is a bird habitat for about 120 species. Every year in the month of October thousands of birds from Australia and Siberia, known locally as “kondamkodi and nathagotta”, visit the area for about six months. They use the “beela” as a nesting and feeding habitat. This is an important migratory route and passage migrant place. The area is also home to several wild animal species known locally as “varudu and peddhanakka”. The “pamula metta” in the “beela” contains many varieties of snakes. It is astonishing that this fact has been glossed over by the forest department!

We strongly believe that a thermal plant will upset the fragile ecology of the entire area that stretches into the nearby Eastern Ghats rising in which is the Mahendragiri hill, the highest peak in the range. Baruva, Sompeta, Kaviti and Kanchili are places of religious importance. The famous Sri Kotilingeswara Swamy, Budalingeswara Swamy and Janardhana Swamy temples, to name a few, are located here.

Abutting the “beela” is the magnificent Uddhanam (Udhyanavanam) area, known for its beautiful coconut groves and large extents of cashew, jack fruit and mango. Indeed, this pristine area is referred to as a “mini-Kerala”. There is also a coconut nursery and a coir industry here. Over 600 families from the segidi community eke out a living from toddy tapping in and around the Uddhanam area

The coast here is home to a vibrant and hard-working fisher-folk community living in over 20 villages. If the thermal plant comes up in the area, it will severely undermine marine catch and make life miserable for them. We know this from earlier experiences of fisher-folk living in the vicinity of the NTPC thermal plant and several other highly polluting industries in Visakhapatnam district.

The environmental public hearing for the NCC thermal plant that was held at Gollagandi village on 18-8-2009 witnessed an overwhelming majority of people strongly opposing the proposal. Cutting across community, class, occupation and political party’ lines, people of the three mandals have been organising countless rallies, dharnas, postcard and other peaceful campaigns against the thermal plant proposal since several months. In fact, a totally voluntary bandh [general strike]] was observed in Sompeta, the mandal headquarters on August 21. Such is the strong sentiment among the local people against the setting up of the plant.

We state categorically that we are not against development. We are all for it. But we are of the firm opinion that this thermal plant will not usher in development. Rather, it will destroy whatever development we have. It will devastate the lives of thousands of families from the farming and fisher-folk communities as well as throw into deep distress landless labourers and artisan classes.

In case the thermal plant comes up, it will cause irreversible damage to an eco-system of great value that we all need to preserve for future generations. The land here, the coast and our “beela” has supported and sustained the livelihood and economy of innumerable farmers and occupational classes. The location of the project directly conflicts with both livelihood and conservation objectives. Is it at all necessary to set up such a plant amidst lush greenery and in the midst of a population of about 1.5 lakh people?

We strongly urge you to intervene and ensure that the proposal to set up the thermal plant in Sompeta mandal is dropped.

Challenge to Government Order for plant

Some farmers who lost their land to the Nagarjuna Construction Company Sompeta Thermal Plant approached the High Court to challenge the Government Order for the plant. In June 2010, the petitioners highlighted a communication from the Chief Commissioner of Land Administration (CCLA) issuing instructions (No. B2/2225/2003) to all district collectors ordering them "to protect water bodies on war-footing basis under Neeru Meeru Programe and to identify and include all lands covered by water bodies," which petitioners say the plant violates. The petitioners also contend that the land allotted to NCC for thermal power project is a precious wet land on which local people are dependent.[10]

In June 2011, a judge of the Andhra Pradesh High Court Justice NR Rao issued an interim order suspending a government order (GO) allotting land to NCC. Justice Nuti Ramamohan Rao, while staying the GO, ordered that no work be carried out at the project site.[10]

A senior official of NCC had recently said that they may pursue the Nagarjuna Construction Company Sompeta Thermal Plant after 2012.[11]