The Oltenia Energy Complex is a network of coal mines and power plants, operated by Complexul Energetic Oltenia S.A., producing 22 million tonnes per annum, in Gorj, Vâlce, and Mehedinţi, Romania.

The complex produce 95% of the country's lignite, primarily for the Rovinari power station and Craiova power station.[1]

Oltenia Energy Complex currently has an expansion plan, in a joint venture with China Huadian Corporation, to expand production of the Rovinari by 4.5 million tonnes per annum.[2] The country's National Energy and Climate Plan (NECP) through 2030 – released on January 31, 2020 – removes plans for new coal projects that appeared in earlier drafts, including the 600 MW unit at Rovinari. The omission suggests plans for the new coal mine and unit have been shelved, although no official announcement has been made.[3]

The photo below shows the exact location of the Rovinari mine, the largest open pit mine in the country, in Gorj county, Romania.

The Oltenia Energy Complex was established in 2012 by merging Societatea Naţionala a Lignitului Oltenia with Energy Complexes Turceni, Rovinari and Craiova. The company has its material base in Gorj, Vâlcea and Mehedinţi counties with total reserves of 2 billion tonnes of coal. The annual production is between 20-30 million tonnes of lignite and 4 million tonnes of anthracite and the total number of employees is approximately 7000-8000.[1] 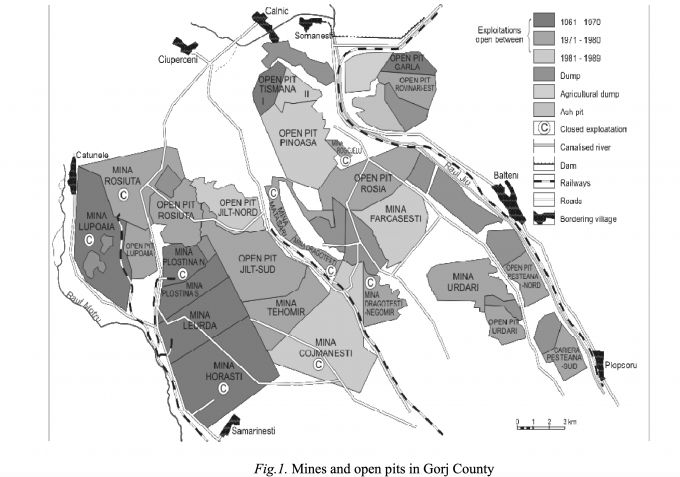 A map of the operating and former mines in the Oltenia Energy Complex.

Several of these mines have been considered for extension.

In 2012, almost one hundred permits were issued to Oltenia Energy Complex (OEC) with regard to several mines, allowing the company to cut down hectares of forest to make way for coal mines. The permits were issued illegally, however, as Bankwatch Romania proved in court over the past six years. After many lawsuits and complaints to the relevant authorities, a sign of progress came this summer when the Romanian Ministry for Environment informed criminal investigation bodies about this situation. The slow evolution of the lawsuits allowed some areas to be deforested before the trials were finished, as the decisions were not suspended. Someone may be held accountable for the illegal permits that led to the destruction of hundreds of hectares of forest. Six years after the local authorities failed to protect the environment, a criminal investigation began. This law was changed in the meantime, however, enabling large-scale deforestation for projects of ‘public interest’ by removing the mandatory government decisions.[5]

This is the largest open-pit mine in Romania. Rovinari has four open pits, Tismana I, Tismana II, Gârla - Rovinari Est and Pinoasa, and employs approximately 3000 workers.[6] The Romanian Government has been negotiating for several years, since 2012, with the Chinese Government to build a new 600 MW unit at the lignite power plant in Rovinari, Gorj County. The lignite would be supplied from the nearby open-pit mines – Tismana I and II, Rosia, Pinoasa, all owned by the same Oltenia Energy Complex – which would require a 700 ha expansion of production capacity. Extending these mines would mean clearing huge land areas, in most cases accompanied by massive deforestation. As noted above, since 2012, Bankwatch Romania has filed a series of complaints in court, requesting the annulment of illegally issued deforestation permits and mine expansion permits that did not assess impacts on the environment. Almost all the actions have been successful in court. After an infringement procedure was initiated by the European Commission, all the expansions were reassessed. However, the new permits fail to evaluate the cumulative impact of the mines, and are therefore again the subject of Bankwatch Romania court action, one of them being currently suspended. To date (May 2018) no environmental impact assessment procedure has been launched.[7]

The mine has three open pits Roșia, Peșteana Nord, Peșteana Sud-Urdar and around 2,900 workers.[8] The company wanted to expand Rosia's 1,450-hectare coal mine by a further 280 hectares, 235 of which are currently covered by forest which would have had to be cut down. The NGO BankWatch Romania challenged the expansion in court because the expansion would make it harder for the country to meet its coal phaseout targets. During the two-year legal battle, Bankwatch argued that the expansion had initially been granted without properly consulting locals and that the environmental impact of such an expansion had not been assessed. BankWatch added that the expanded mine would pollute the area, including underground water, and that endangered species would also be negatively impacted. The court blocked the expansion.[9]

Jilt is one of the largest open-pit mines in Romania. The mine has two open pits, Jilț Sud, Jilț Nord, and around 2,400 workers.[10] In 2015, the residents of Runcurel, a village in Romania’s south west, were given 30 days to vacate their homes in exchange for 1 euro per square meter of land to accommodate the Jilt Nord mine expansion. Backed by a Romanian government executive decree dated Dec. 9, the mine was declared a project of national importance and earlier attempts to reach a deal with villagers were abandoned. The villagers say no compensation was offered for homes, orchards, crops or other assets linked to the land and lodged court action against the company.

On March 18, 2016 villagers from Runcurel, with the help of Bankwatch and Greenpeace, filed a case to sue the government in a bid to have the decision to reclaim their land revoked. The court documents state the environmental permit issued for the mine’s expansion is linked to a formal strategy to relocate the villagers to nearby Telesti at OEC expense, which remains unimplemented. Additionally, the document states the government’s executive decree contradicts Romania’s national energy strategy which seeks to reduce energy production from coal and discourages new energy projects with significant socio-cultural impacts.[11]

As stated above, the deforestation permits allowing the Jilt Sud expansion were annulled in 2017. However, in 2019, the government approved the final procedure for extending the perimeter of the Jilț Sud mine, which already opened this year.[12]

In 2019, Rosiuta mine in Motru, in Gorj county was transferred to Oltenia's ownership as well.[13] The mine was first opened in 1983 and has a capacity of about 3 million tons per year.[14] In 2019, the government approved the final procedure for reopening Roșiuța mine.[12] The mine employed 14,000 employees, but in October 2019, the Bucharest Court of Appeal canceled the environmental authorization of the Roșiuța mine.[15]

Wikipedia also has an article on the Oltenia Energy Complex (National Company of Lignite Oltenia). This article may use content from the Wikipedia article under the terms of the Creative Commons Attribution-ShareAlike 3.0 Unported License].

Retrieved from "https://www.gem.wiki/w/index.php?title=Oltenia_Energy_Complex&oldid=249462"
Categories:
This page was last edited on 10 June 2021, at 14:13.
Content is available under Creative Commons Attribution-NonCommercial-ShareAlike unless otherwise noted.
Privacy policy
About Global Energy Monitor
Disclaimers