Riga Free Port is a major port on the east coast of the Baltic Sea, located in Riga, the capital of Latvia.

The Strek Terminal, the Riga Coal Terminal, and the Riga Container Terminal handle or handled coal at the port.

The Riga Free Port is located along the River Daugava, which drains into the Gulf of Riga, an arm of the Baltic Sea. The map below displays the location of the Krievu Island within the Port area.

In 2011, the Free Port of Riga handled 13.5 million tonnes (mt) of coal. That year, total cargo turnover at the port was 34 million tons. Coal, which is exported from Russia through Riga to the Western markets, had been the largest commodity in the port since 2002.[3]

In 2009, the Riga Container Terminal successfully loaded Panamax type vessels, the largest bulk cargo carriers that could enter Riga Free Port, with coal and cast iron cargo. At the time, Riga Central Terminal (RCT) – which appears to be a subsidiary of LLC (SIA) Rīgas Tirdzniecības Osta (RTO) – was the largest multifunctional stevedoring company in the Republic of Latvia. Located at the Riga Free Port, it started providing its services in 1996. In 2008, RCT handled a total cargo throughput of 7.9 million tonnes.[4]

With more than 7.5mt of coal handled in 2011, RCT Ltd. was the leading coal terminal at the Freeport of Riga. The company operated a multifunctional terminal, specialized in the handling of various dry bulk cargo, general cargo, ro-ro (roll-on-roll-off) and other types of cargo. In 2011, servicing of Panamax vessels was successfully started by RCT, allowing coal to be shipped not only to the Western European markets but also to Asia, South America, and South Africa.[3]

STREK Ltd. was established in 1991 and has founders from three countries - Latvia, Russia, and France. In 1992, the company started to operate the first stage of its coal terminal at Riga Free Port. The annual turnover of cargo handling in 1992-1993 reached 9 million tonnes.[5]

In 2011, Strek Ltd. operated the second largest coal terminal at the Free Port of Riga and handled some 4.5mt of coal. Strek Ltd., a dry bulk stevedoring company, had more than 95% of its total turnover made up of coal cargoes. The terminal was located in the direct vicinity of the city centre.[3]

In 2012, with the aim to free Riga city center from coal cargo and relocate coal transshipment to new terminals on Krievu Island, the Riga Free Port Authority launched the project “Development of Infrastructure on Krievu Island for the Transfer of the Port Activities from the City Centre.” In December 2015, the construction of the basic infrastructure of the Krievu Island terminal was completed, and four deep-water berths (draught 15.5 m) with a total length of 1180 meters and the necessary access road and engineering infrastructure were built.[6]

According to the city development plan, all bulk terminals had to be moved from the city centre to areas distant from the residential districts to improve the environmental situation and reduce the load of freight transport and railway.[7]

The planned terminal throughput capacity was 15 to 20 million tonnes per year, and project cost was €151.8 million.[8]

Alongside construction of the additional infrastructure commenced by the Port Authority in September 2017, stevedoring companies were building administrative and process buildings and installing special-purpose equipment for coal handling, crushing, transportation, and loading onto ships on the "island."[1]

By 2018, the second stage of the construction work at the Krievu Island terminal was complete and fully operational. Construction of all additional infrastructure undertaken by the Port Authority in the territory of the stevedoring companies Strek and Riga Coal Terminal was complete.[1][9]

The Freeport of Riga Development Programme for 2019-2028 summarizes the following:[10]

"The majority of the currently actively used territory of the Freeport of Riga is located on the right bank of the River Daugava, where handling and storage of all types of cargoes takes place, as well as industrial activity (ship building and repair, fish processing etc.). Closer to the city centre – in the vicinities of Eksportosta and Andrejsala – cargo handling is being performed also beyond the boundaries of the Freeport of Riga; the only specialised passenger ship service terminal is located on Andrejsala. Port companies, which operate on the right bank of the River Daugava, provides for approximately 90% of the port's total cargo turnover.

"A comparatively smaller part of the currently actively used territory the Freeport of Riga is located on the left bank of the River Daugava. During the period of the FRDP 2009–2018, Krievu Island has been significantly developed, where the FRA has implemented the investment project 'Development of Infrastructure on Krievu Island for the Transfer of Port Activities from the City Centre' by creating a multi-functional infrastructure of bulk terminals. As a result of the project, the complete transfer of coal handling from Eksportosta to Krievu Island, as well as complete discontinuation of cargo handling on Andrejsala is planned for 2019." 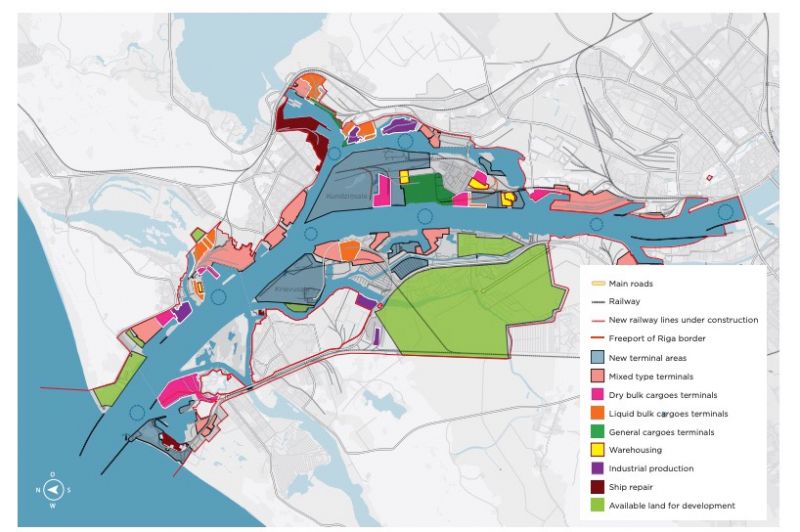 On September 19, 2014, a memorandum of strategic cooperation was signed between Riga Coal Terminal and China Harbour Engineering Company (CHEC) to increase cargo turnover in Riga port by 2018. The amount of expansion was not specified.[11]

In spring 2019, Riga Coal Terminal's operation became active. Its terminal specializes in handling of energy and metallurgical coal of all kinds and is located at Krievu Island. It operates two berths (KRS6 and KRS7).[13]

Retrieved from "https://www.gem.wiki/w/index.php?title=Riga_Free_Port&oldid=271903"
Category:
This page was last edited on 27 October 2021, at 18:17.
Content is available under Creative Commons Attribution-NonCommercial-ShareAlike unless otherwise noted.
Privacy policy
About Global Energy Monitor
Disclaimers