Global use and production of coal

The total global production of black coal (also referred to to 'hard coal') in 2008 was estimated by the World Coal Institute as being 5,845 million tonnes, a 67% increase since 1990. A further 951 million tonnes of the lower quality brown coal/lignite was produced.

As of December 2011, coal is estimated to provide 29.6% of global primary energy needs and generate 42% of the world's electricity, with the bulk being mined in-country, often in close proximity to power stations.[1] China, the U.S. and the European Union all boosted their consumption of coal in 2010, as global use of coal advanced 7.6 percent, and global energy consumption advanced at the fastest pace since 1973.[2]

While power generation accounts for the bulk of coal consumption, approximately 13% (approximately 717 million tonnes) is used for iron and steel production. The next most coal dependent sector is cement production.[1] 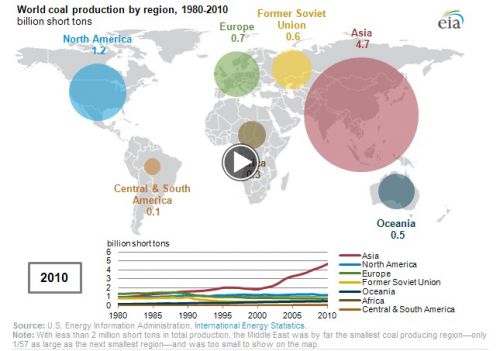 The largest producers of hard coal, based on 2008 estimates,[1] are:

The largest coal exporters, based on 2008 estimates[1], are:

The largest coal exporters, based on 2009 estimates[6], are:

In May 2011, Reuters reported that total U.S. coal exports could amount to around 100 million tons (91 million tons) in 2011, according to analysts, leaving only Australia and Indonesia above the U.S. in world coal export rankings, and putting the U.S. above Russia, Colombia and South Africa.[7]

Approximately 59% of global traded coal consumption is in Asia. The largest coal importers, based on 2008 estimates[1], are:

The largest coal importers, based on 2009 estimates[8], are:

Coal production forecasts for 2010 and beyond

In early 2010, ABARE, an Australian government economic modeling and statistics agency, outlined what it thought the key trends would be over the next five years affecting thermal[9] and metallurgical coal demand and production.[10]

For thermal coal, ABARE forecast an increase in contract prices over the 2010-2015 period as a result of increased demand from India, the Republic of Korea, Chinese Taipei and Japan.[9]

ABARE also projected a 19% increase in thermal coal imports from 730 million tonnes in 2009 to around 872 million tonnes in 2015 which would predominantly be met with increased exports from Australia, Indonesia and Colombia. These countries, ABARE noted, have "expanded mine and infrastructure capacity." ABARE also noted that "production costs are projected to increase over the medium term as coal deposits which are deeper underground and further away from existing infrastructure are developed".[9]

Underpinning the rapid increase in demand is forecast growth in coal-fired generating capacity in Asia and India and China in particular. ABARE forecast that China's imports would increase to 100 million tonnes in 2015 from 85 million tonnes in 2010. In particular, ABARE noted that the main coal producing regions in China are "distant from large consuming regions on the south-east coast. Increasing transportation costs and rail infrastructure constraints associated with the increasing geographic distance between production and consumption centres will continue to support thermal coal imports over the outlook period."[9]

ABARE also projected that imports into India are expected to double over the 2010 to 2015 period. Even though Indian coal production is rapidly expanding ABARE noted that most of the deposits are "distant from the coastal sites of a number of the planned power stations. This could result in high transport costs and potentially unreliable deliveries."[9]

Underpinning the rapid growth in Indian demand are the plans for the construction of nine 'ultra mega' 4,000 megawatt power stations which would each consume up to 16 million tonnes of coal, the first of which is scheduled to come online in 2012 and another in 2013.[9]

Other Asian countries are expected to contribute to increased demand for coal albeit at lower rates than India and China. ABARE projects that Japanese coal demand will increase by approximately 5% over the 2010-2015 period due to limited increased in coal-fired power supply as a result of the expansion of nuclear, efficiency and renewables. While new coal-fired power stations commissioned in Korea in 2008 and 2009 led to a jump in demand in coal imports, ABRE expects imports to slow to approximately 2% a year as the expansion program is completed.[9]

Europe on the other hand would at best return to the level of demand of a few years earlier. The main exception is expected to be increased imports into Germany due to the phase out by 2018 of subsidies supporting German coal mines.[9]

ABARE projects that the largest increases in coal imports in the period from 2009 to 2015 will come from[9]:

In its March 2010 commodities forecast, ABARE projects the the demand for metallurgical coal is likely to expand rapidly in the 2010-2015 period as a result of rapid industrialisation in developed countries, especially China and India, and economic recovery in the OECD countries. ABARE projects that global steel production in 2010 is likely to return to approximately the same pre-global financial crisis level it as was in 2008. By 2015, ABARE projects that global steel consumption will have risen from 1.3 billion tonnes to 1.8 billion tonnes, an average annual growth rate of 6%.[10]

ABARE notes that Chinese steel demand -- driven by increasing domestic middle class consumption of consumer products as well as in housing and infrastructure projects -- will increase by 9% per annum. ABARE also estimates that India's consumption of steel is likely to increase at the same rate. While ABARE projects annual growth rates in the range of 4-5% for the United States, Japan and the European Union it expects that by 2015 steel consumption will be approximately 2% lower than in 2008.[10]

By 2015, ABARE projects that approximately 61% of steel production will be concentrated in Brazil, Russia, India and China. "The major contributing factors to the increasing concentration of steel production in these major developing economies include strong domestic demand, relatively low production costs and, in some cases, large domestic reserves of raw materials," ABARE states.[10]

ABARE also notes that while demand will be strong for metallurgical coal, production costs are likely to be higher in the main producing countries. "In China, metallurgical coal will be increasingly sourced from deeper deposits in locations more remote from existing infrastructure, which will result in higher production and transport costs. New mines in Australia are also likely to have higher production and transport costs compared with existing mines. Capital costs have increased over the past five years and the cost of using new infrastructure is significantly higher compared with existing port and rail facilities. Therefore, prices for hard coking coal are unlikely to remain less than $100 a tonne for any sustained period," ABARE notes.[10]

Canada in particular, could rapidly expand production back to pre-global financial crisis levels. ABARE also foreshadows that the global supply of metallurgical coal could be supplemented by new mines being established in Mozambique and Mongolia.[10] (See Mozambique and coal and Mongolia and coal for further details).

ABARE projects that the main metallurgical coal exporters in the period from 2009 to 2015 will be[9]:

Addressing potential investors in Manhattan on June 17, 2010 Gregory Boyce, the chairman and chief executive or Peabody Energy, stated that “a long-term supercycle for coal,” driven by rapidly growing demand in Asia, would be extremely profitable. A company press release explained:

Boyce observed that coal has been the world’s fastest-growing fuel this past decade, with demand growing at nearly twice the rate of natural gas and hydro power and more than four times faster than global oil consumption. “It’s stunning that any mature commodity could expand nearly 50 percent in a decade and speaks to the strong appetite for the products we fuel, as well as coal’s abundance and stable cost,” he said. Coal demand is also expected to grow faster than other fuels in coming decades.

Asia-Pacific nations are leading a historic global build-out in coal-fueled electricity generation. More than 94 gigawatts of new generation are expected to come on line in 2010, representing 375 million tonnes of coal consumption per year. If growth continues at the current pace, generators would add another 1 billion tonnes of new coal demand every three years.

Richard K. Morse of Stanford responded to Peabody's statement saying, "While Peabody’s PR has taken some creative turns in the past (framing access to coal as a human right), this document reflects a reality that we are watching closely at Stanford: Coal is the world’s fastest growing fossil fuel (for the 8th year now) and likely will be for the next 10-20 at least. According to BP’s 2010 Statistical Review of World Energy released this month, coal now occupies a greater share of the world’s energy mix than at any point since 1970."[11]

Retrieved from "https://www.gem.wiki/w/index.php?title=Global_use_and_production_of_coal&oldid=231776"
Categories:
This page was last edited on 30 April 2021, at 10:46.
Content is available under Creative Commons Attribution-NonCommercial-ShareAlike unless otherwise noted.
Privacy policy
About Global Energy Monitor
Disclaimers