Plans for the terminal were officially cancelled in May 2013.[3] 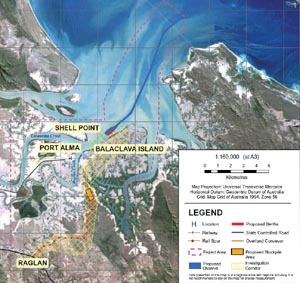 In July 2008 Xstrata Coal announced that it would undertake a pre-feasibility study for a coal export port for up to 20 million tonnes of coal per annum. The study, the company stated, would be completed by June 30, 2009.[1] By March 2010, the company referred to the proposal for a 35 million tonne per annum coal terminal.[2]

In a March 2010 newsletter the company stated that "in August 2008, XCQ commissioned consultants GHD to conduct environmental impact assessment studies to explore the viability for development of a proposed coal terminal in the vicinity of Port Alma. Following a range of desktop and field investigations, the project team determined that the most suitable location for the proposed coal terminal was on Balaclava Island. Subsequently, the project has been re-named as the Balaclava Island Coal Export Terminal Project."[4]

The company stated that the proposed project included the development of:[5]

Two weeks after the Glencore-Xstrata merger in early May 2013 it was announced that the company had stopped work on the proposed 35 million tonnes per annum Balaclava Island Coal Terminal. In a statement the company stated that "this decision has been made as a result of the poor current market conditions in the Australian coal industry, excess port capacity in Queensland, specific shipping limitations and concerns about the industry's medium-term outlook.[6] The proposed terminal was one of the export terminals being investigated to cater for the Wandoan coal project.

Retrieved from "https://www.gem.wiki/w/index.php?title=Balaclava_Island_Coal_Terminal&oldid=9190"
Categories:
This page was last edited on 25 December 2019, at 18:51.
Content is available under Creative Commons Attribution-NonCommercial-ShareAlike unless otherwise noted.
Privacy policy
About Global Energy Monitor
Disclaimers